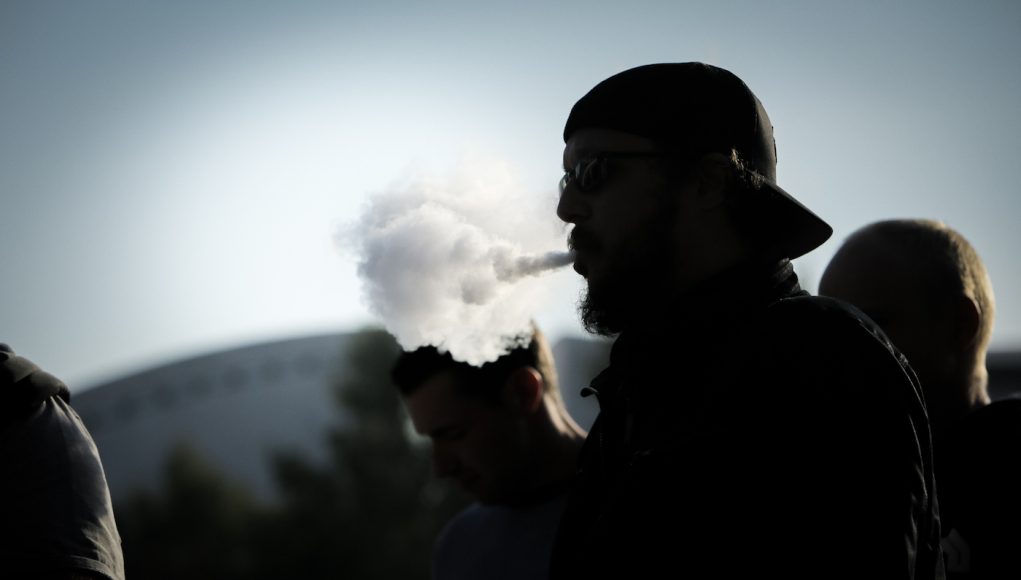 The authors, Jan Heide, Sven Ehlert, Andreas Walte and Ralf Zimmermann, Professor at the Department of Analytical & Technical Chemistry at the University of Rostock, Germany, investigated* emissions of standard combustible, Heat-not-burn (HNB) and electronic cigarettes. The used qualitative and quantitative analytic mass-spectrometry techniques to compare nicotine, organic and aromatic molecules in emissions. The performance of their system allows online analysis and to compare consecutive puffs of the same hardware.

The HNB products tested by the research team were iQOS (PMI), Eclipse (RAI), Ploom (JTI) and a research combustible cigarette. From one puff to another, the analysis of the nicotine emitted by those devices is not equivalent. While the combustible cigarette (in black on the graph) delivers increasing amounts of nicotine from an initial level close to zero, the HNB iQOS (in red on the graph) has a completely different pattern. The attack corresponds to the highest nicotine level and a gradual decrease with puffs is observed, down to zero.

Eclipse and Ploom deliver their nicotine gradually, starting from a non-zero level and reaching a maximum value after a few puffs. Then, a gradual decrease of the nicotine dose delivered at each puff is observed.

The maximum number of puffs exploited for nicotine delivery is comparable between a combustible cigarette and the iQOS and does not exceed 10. The Eclipse and the Ploom, in contrast, continue to deliver nicotine up to 20 puffs and even beyond, for the Ploom.

The analysis of emissions also revealed a much lower levels of toxic combustion by-products (Butadiene, here in the example) in HNB cigarettes compared to combustible ones. However, the Eclipse, because of the combustion of charcoal for heating the tobacco cylinder, exhibited higher levels of those by products but at one order of magnitude lower than in the smoke of a combustible cigarette.

The analysis of emissions also reveals that at higher temperature, the spectral signature of toxic compounds is enhanced, which indicates that more of such compounds are produced. More research is needed to be able to characterize the influence of temperature on the taste and determine the best compromise between heating and flavor.

Statistical analysis (non-negative matrix factorization) allowed the researchers to investigate the quality of emissions at different stages, ignition and tailing.

Compared to the HNB or standard combustible cigarette, online analysis of e-cigarette emissions reveals zero emission of combustion by-products and a much more homogenous delivery of nicotine with almost the same nicotine level delivered at each puff. Their findings indicates that the homogeneity of the emissions per puff and reproducibility are also observed for other compounds like flavorings (example with Menthol) and with the products derived from thermal degradation of Glycerol contained in e-liquids.

A question of compliance of HNB cigarettes with the TPD

While the TPD indicates that a necessary condition to be marketed in the EU is that “electronic cigarettes deliver the nicotine doses at consistent levels under normal conditions of use“, this study demonstrates that it is not the case for HNB cigarettes.

The Scientific Committee in Support of Electronic Cigarettes in the field of public health already advised EU legislators, during a recent cession, not to treat the two products, HNB and electronic cigarettes, on the same regulatory basis because of the presence of tobacco leaves in one and of liquid nicotine (not necessarily extracted from tobacco) in the other. The new independent results provided by the University of Rostock tend to confirm the basic differences between the two families of ENDS.

Whether the evaluation of nicotine delivery shall be made at the puff level or not will then be critical, strategically, to HNB cigarettes. It is a question that remains to be answered by the workgroup on standards for e-cigarette emissions of the European Committee for Standardization (CEN). But if HNB cigarettes continue to be assimilated to e-cigarettes as ENDSs, it will become questionable whether they could pretend to obtain compliance under the EU TPD and be marketed in the EU.

“Only electronic cigarettes that deliver nicotine doses at consistent levels should be allowed to be placed on the market under this Directive. Delivery of nicotine doses at consistent levels under normal conditions of use is necessary for health protection, safety and quality purposes, including to avoid the risk of accidental consumption of high doses.”DIRECTIVE 2014/40/EU OF THE EUROPEAN PARLIAMENT AND OF THE COUNCIL

More about HNB cigarettes and their possible regulation:

* An overview of the research has been presented at the ECIG symposium in La Rochelle, France.

Community Diane Caruana - May 17, 2022 0
November 7, 2021 A clarion call on behalf of several LMIC context networks of health/medicine students and young professionals and academics We are elected representatives of...