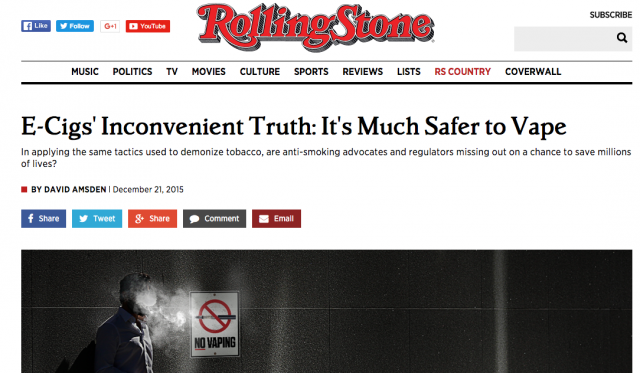 A man, vaping, standing by a “no vaping” sign at the New York’s City Hall, last winter. Cathal McNaughton, an Irish photographer who depicted the Civil War in Belfast for The Irish News, sets the tone of David Amsden’s vigorous article in Rolling Stone with this very graphic picture.

The article that comes as an echo of A. Bieber’s forthcoming movie, A million Lives, is built around an interview by Daniel Walsh. The founder of Purebacco, the so-called High Priest of Vaping, explains his route through vaping from Artificial Intelligence to what he considers life-saving science. The discussion starts with his “harm reduction” approach to quitting lethal cigarettes and continues on the opposite British and American views of the same issue.

“People smoke for nicotine but they die from tar” – Michael Russell, 1976
The problem, according to Amsden, is that the debate is centred on nicotine, and it has been the case for many decades, also relayed by anti-smoking groups that are fighting against e-cigarettes. Even Diacetyl is widely discussed, with a few words on the recent “Harvard affair“. Amsden makes here a comprehensive article, a must-read to anyone interested in any or all of these topics: smoking,vaping, smoking cessation/quitting, public health, PHE, tobacco risk reduction,  e-cigarettes, the FDA and its crusade to eradicate e-cigarettes.