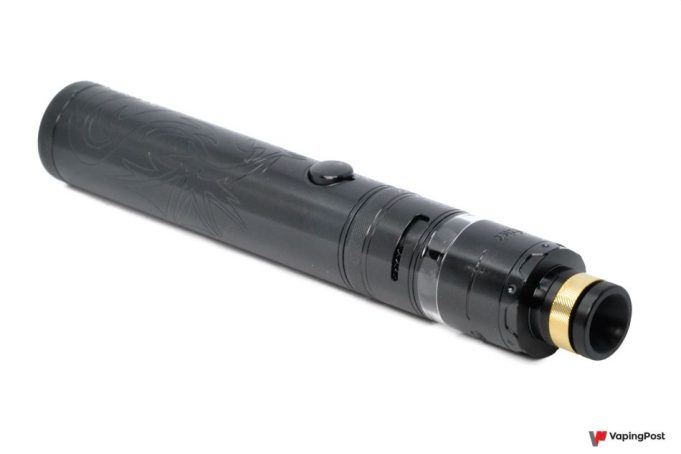 With the Siegfried kit, Vapefly delivers a kit composed of a tubular mod topped with a good-sized RTA. It is particularly well finished and delivers an excellent direct to lung vape. In a nutshell, a nice surprise that will probably make the day of more than one vaper.

A kit with a lot of hard work behind it

The Siegfried is much more than a simple kit. It is the result of a collaboration with the German 103 team. This is the fifth time they have joined forces with Vapefly, and its development took a whole year. Although the design of the Siegfried corresponds to the criteria of the German market, which has always been attracted by larger equipment particularly when it comes to atomizers, it is still very accessible and versatile.

The Deutsche Qualität made in Shenzhen 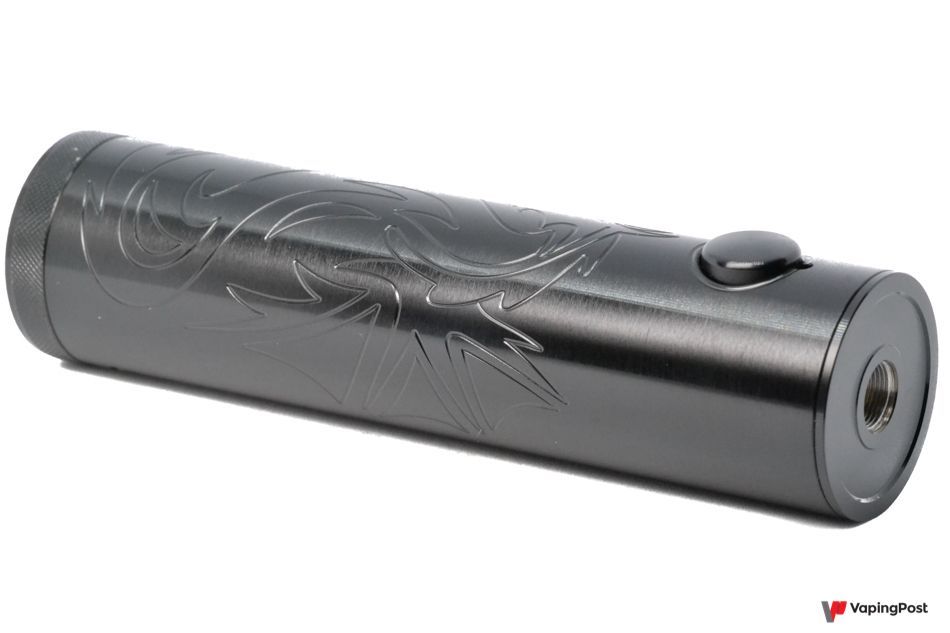 The box sets the tone from the off. The rectangular shape of the box is atypical. The Siegfried Kit logo in Gothic letters framed by dragon wings pulls you straight into the realms of legend. Sigurd-Siegfried is a legendary hero of Norse mythology: a warrior prince with superior strength, responsible for numerous exploits such as killing a dragon.

This legend appears on all the kit, which is both streamlined and scattered with finely worked details. Its somewhat vintage tubular design is a format you either love or hate. This is even truer when the tube is combined with an atomizer that is half the height of the mod. 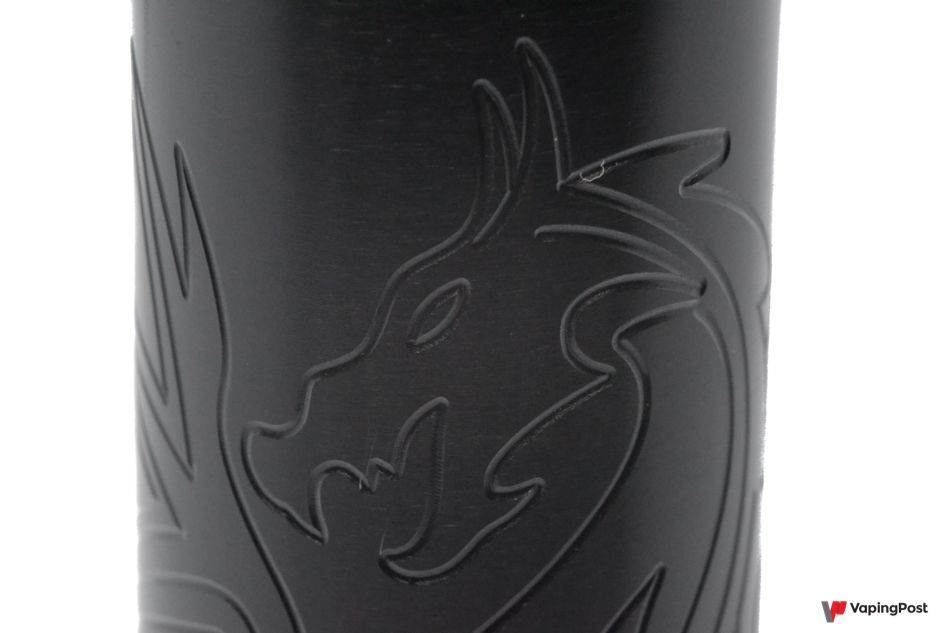 The engravings are done by CNC, a computer-controlled numerical machine tool. The result is really beautiful, with deep, precise engravings, placing the Siegfried right up there at the limit of high-end. 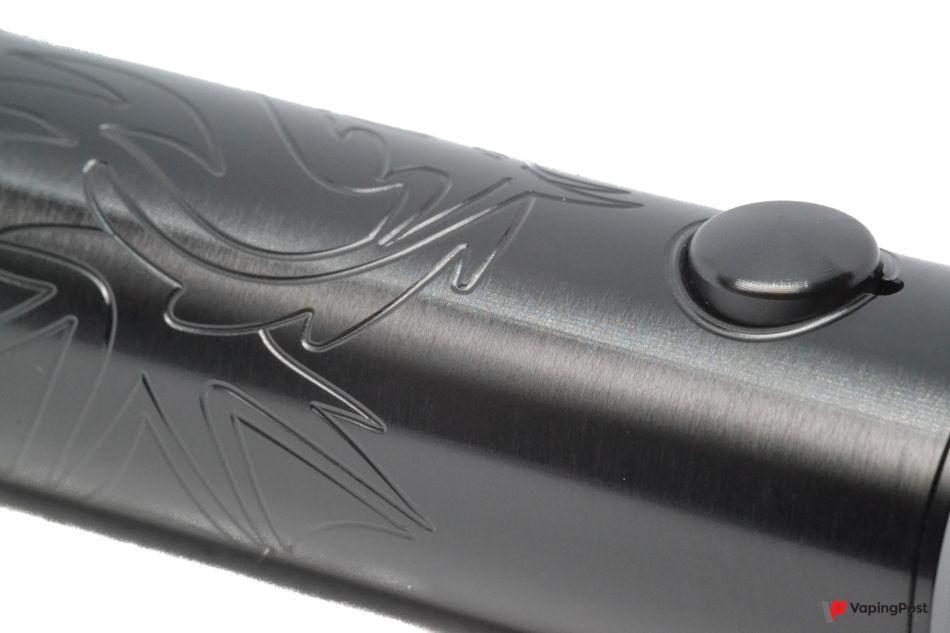 A dragon, which purists would say is closer to an amphiptere, or winged serpent, is depicted on most of the tube. The fire button protrudes by 2mm. Its height is ideal for firing with the thumb, given that in principle, the tube rests naturally on the ring finger when used. 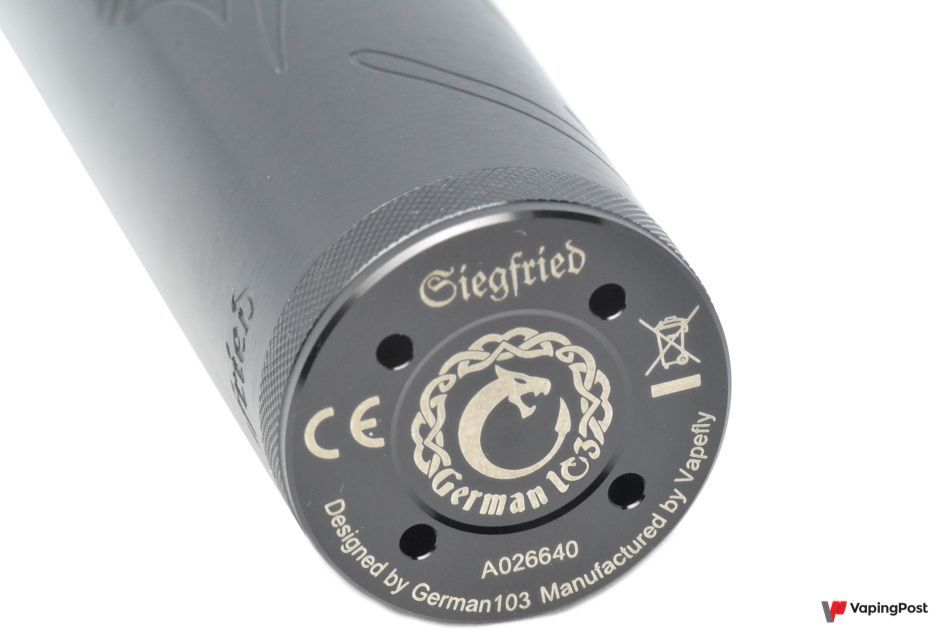 The cap on the battery compartment is knurled around the edge to facilitate its removal. The atomizer has the same knurling at the bottom. The battery cap has 4 venting holes and is marked with the mandatory information. Even if it is only a superfluous detail, the precision of the markings is surprising. 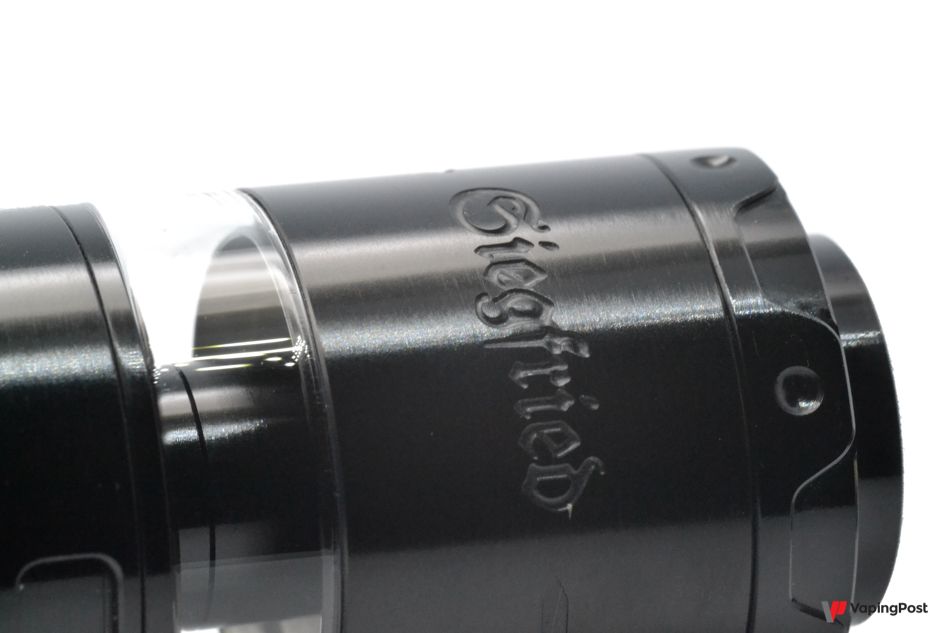 The atomizer is the same high quality and represents a tower with crenellations. The logo engravings framed by two Sigurd swords are fantastic. The top of the atomizer has knurling to help remove it for filling. The 810 drip tip can also be removed to change the ring if you don’t like it, which is rare.

The tank is mainly covered by a panel except for the bottom, where there is a Pyrex window like an arrow slit revealing the level of the liquid. Having this as the only part of the kit that is different to the rest heightens the uniform appearance of the kit, which is visually stunning. 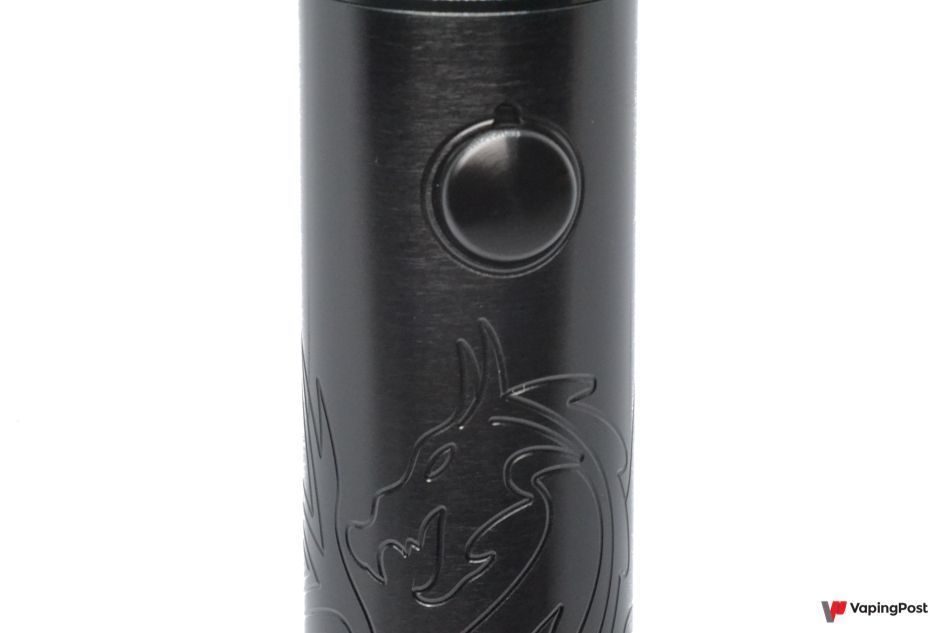 The kit is coated in very good quality paint, which seems to withstand the knocks and bumps of daily life. The kit is good quality, practically high-end in fact. Only the threads of the battery cap and the atomizer deck lack a little fluidity, but it’s not a big deal, we’re close to perfection here.

The Siegfried has a diameter of 25mm and doesn’t have a screen. Bypass is the only vaping mode available. Just to remind you, output in this mode depends on the battery charge, just like a mechanical mod, but with a minimum level of protection. The Siegfried includes an electronic part which is only used here for protection, and to adapt the power to the resistance coil.

Since it has a chipset, one wonders why no regulation has been built in. Having constant power throughout the battery discharge is a quality that is lacking here. No one likes having power variations. This is the only drawback of a mech mod, and it’s a pity not to have included it. It is all the more regrettable that the power is defined by the value of the resistance coil, a valuable feature. 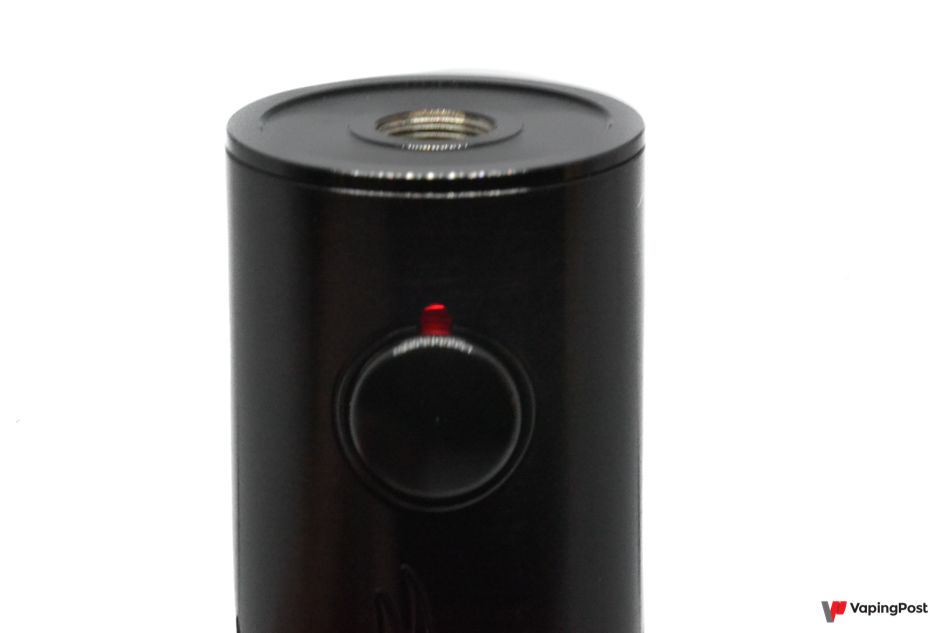 The fire button is ideally positioned and is as comfortable to use as it is silent. Its travel is short, smooth and very quiet, making it very nice to use. However, you need to remember to switch it off for transport, as it is sensitive. An LED positioned just above the fire button indicates the charge level, or any faults. It is discreet, and the good news is that it is one of the rare ones that is visible outdoors. 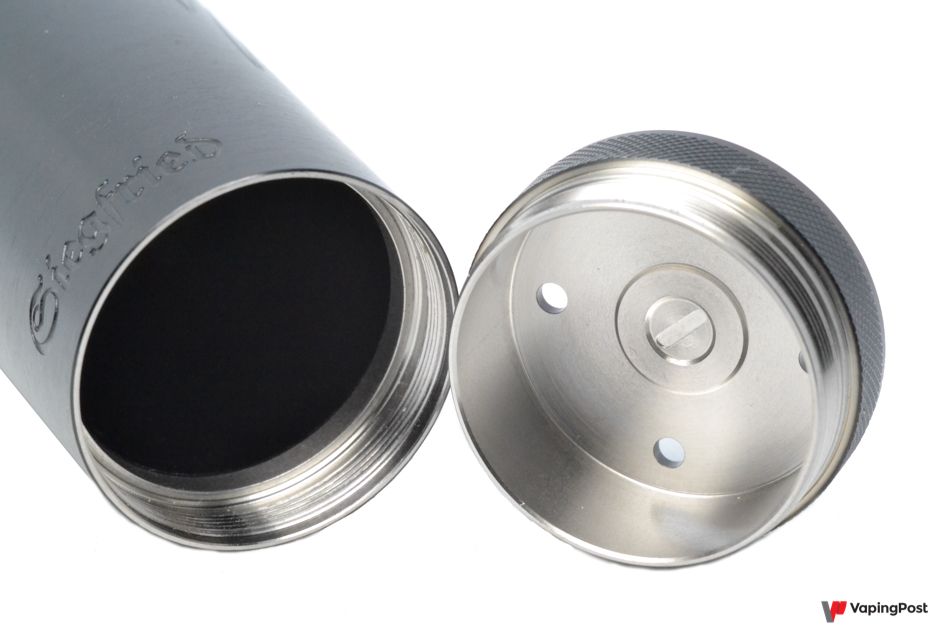 The Siegfried is not exclusive and the three main battery formats can be used: 18650, 20700 and 21700. An adapter is provided for the 18650 format. As stated above, the battery cap has a knurled ring providing an excellent grip to help unscrew it. Four vent holes allow gases to escape in the event of a problem. An engraving inside the cap shows the polarity. The thread could have been shorter, as it takes five turns to remove it, but this is a minor detail. 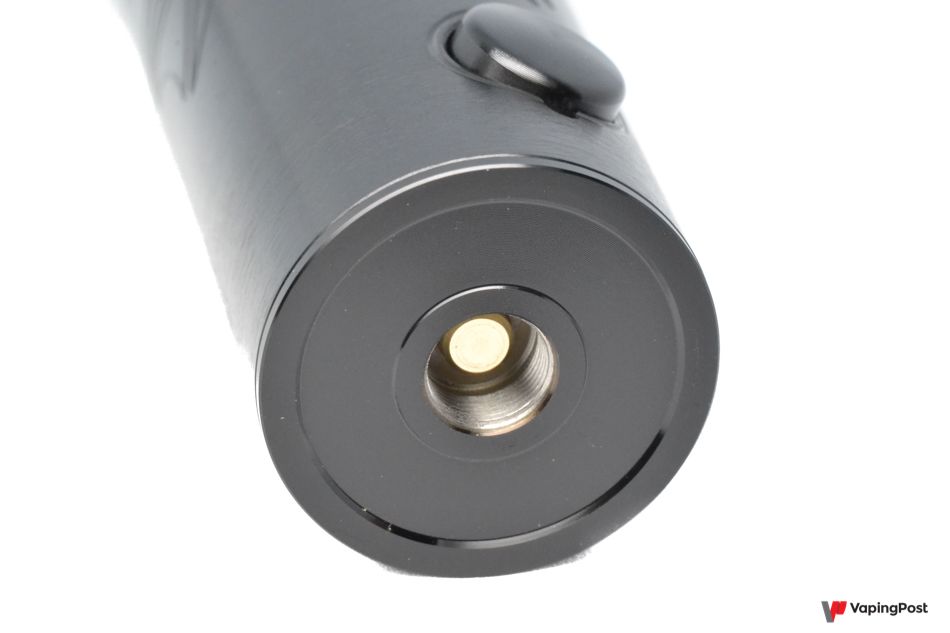 The connector is of the same calibre of course. On the positive spring-mounted pin, the thread is perfectly fluid. Attention to detail extends to the many accessories included in the box, with a sachet of ultra thin POM seals to be placed between the tube and the atomizer to avoid heat transfer, and also to avoid scratching the two parts during assembly. Vapefly really has thought of every last detail. 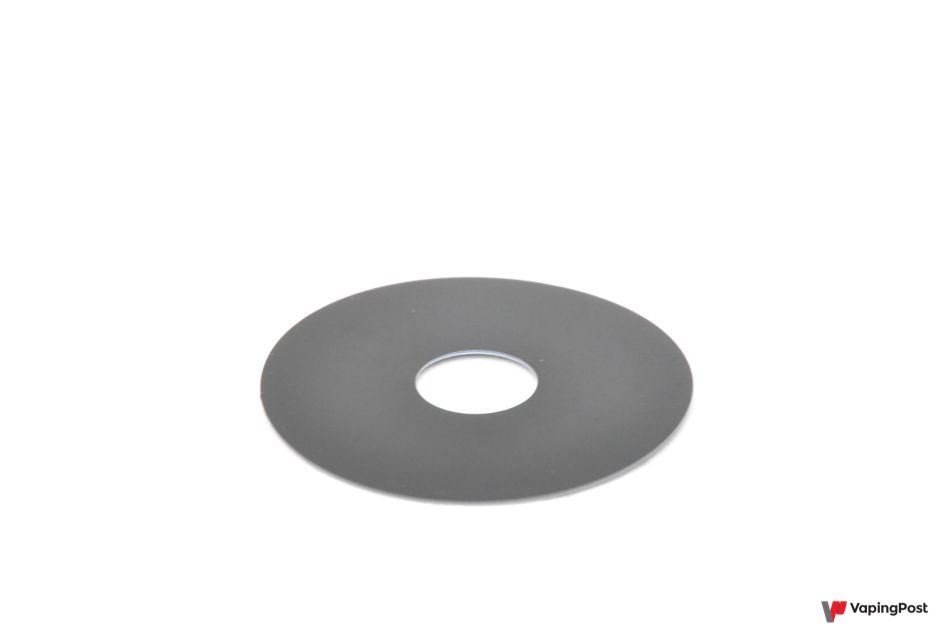 An atomizer that’s up to the job

Its characteristics demand respect: 25mm wide, of course, but also 63mm high with the drip, excluding the threaded connection, and a capacity of 7ml. That’s some baby! 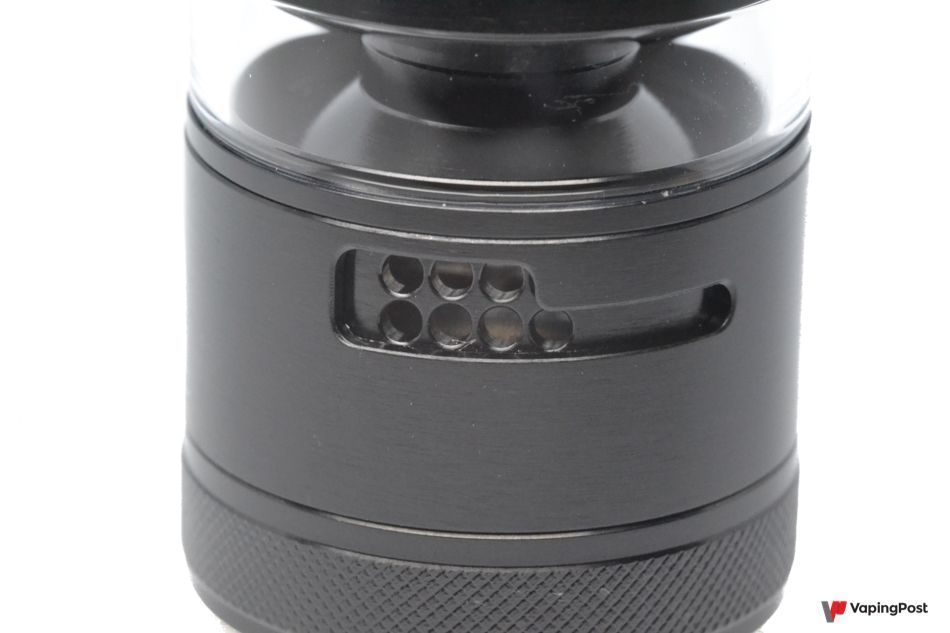 The airflow is adjusted at the bottom by means of a rotating ring with a stop. The ring is finely calibrated for smooth rotation without it being likely to get inadvertently knocked out of position. The cut-out in the ring is L-shaped and has eight holes 1.5mm in diameter. The inlet can be adjusted from two to eight holes. 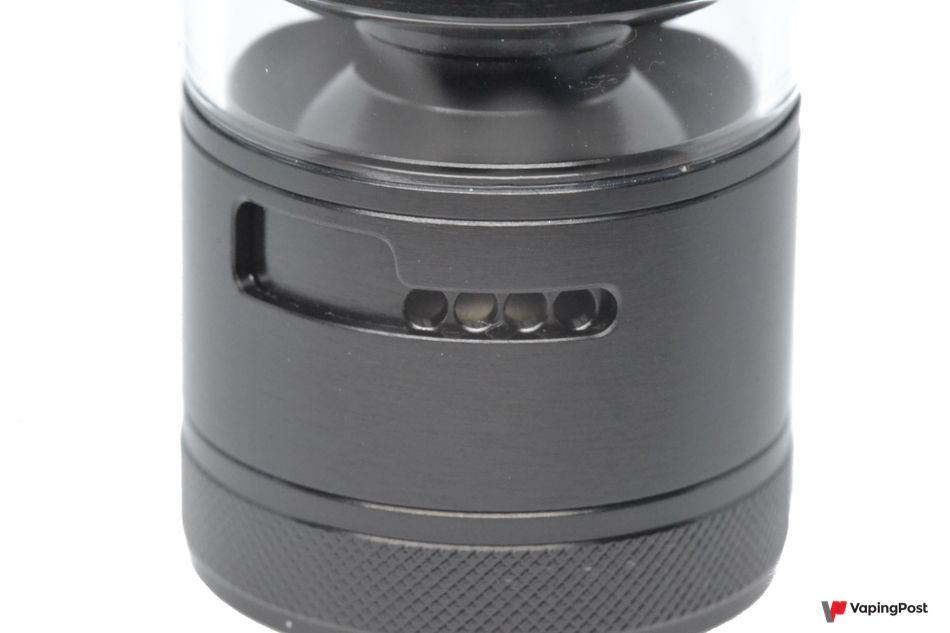 The airflow delivered is very precise and gives a vape that is airy and slightly restricted to very airy, without giving the impression of being completely free. 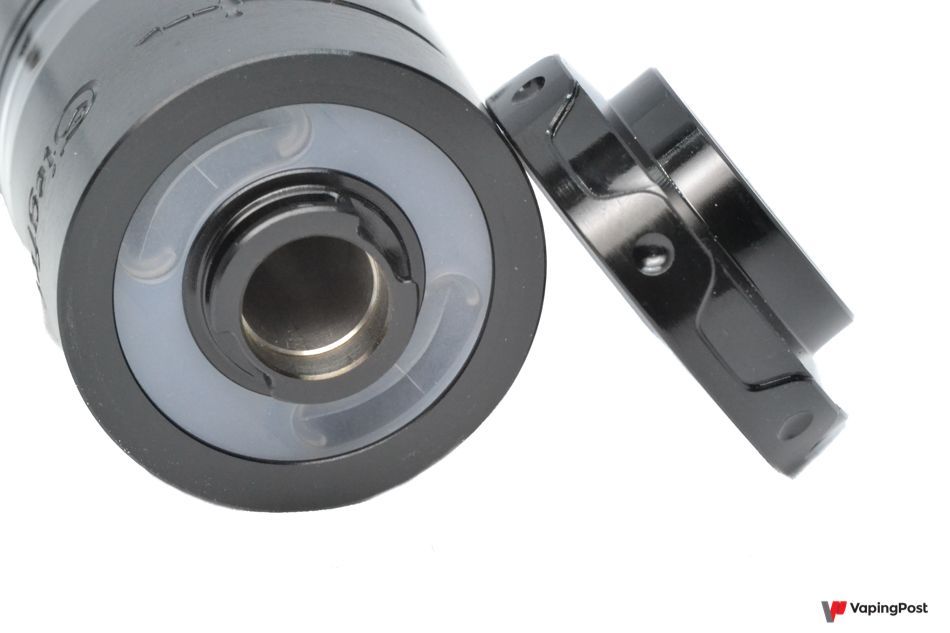 To fill, remove the top of the atomizer by unscrewing through a quarter turn. A flexible membrane covers the filling holes, avoiding the liquid spilling out and letting the air escape during filling. 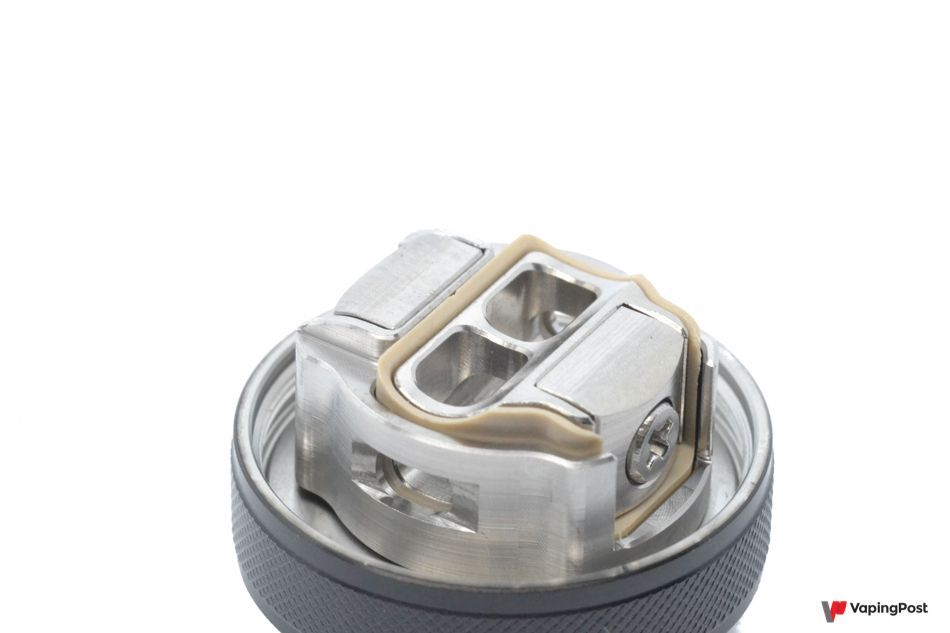 The deck is roomy and its simple design makes it easy to assemble. Mesh or traditional resistance coils can both be installed on it. It comes with four mesh resistances: 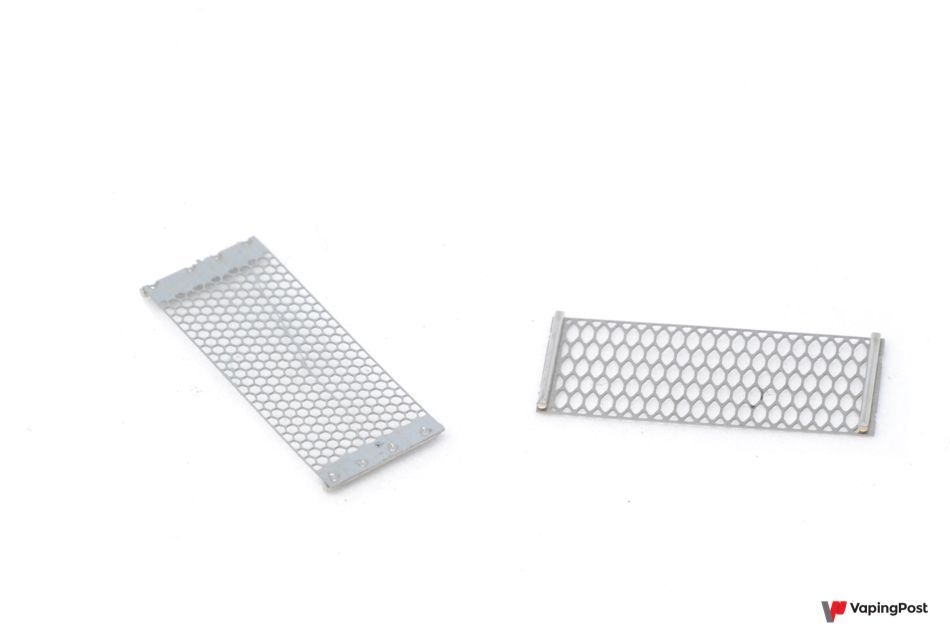 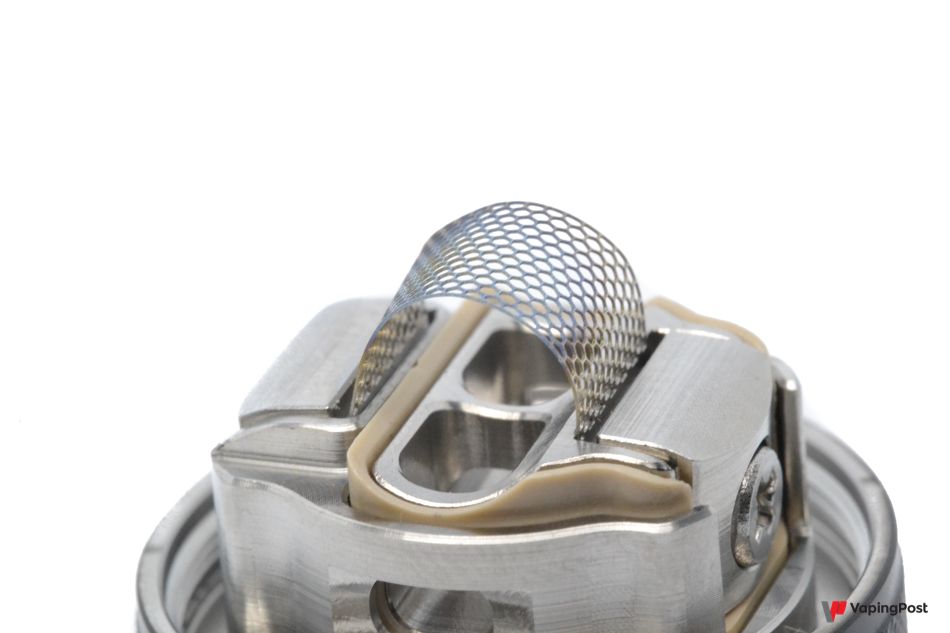 Mounting this type of resistance is very easy, especially as everything is provided. A stainless steel coil rod can be used to shape the resistance. Then simply unscrew the two clamps on each side of the deck to fit it and then tighten them up again. As the mesh needs to be fully in contact with the cotton to avoid hot spots, the amount of cotton and its density are important.

Vapefly provides two Firebolt M cotton laces and advises us on how to use them. The lace format allows the cotton to be threaded through much more easily. When you insert it, you realise that you need quite a lot. Also, standard cotton has difficulty absorbing the liquid as it is very compressed. The Firebolt has excellent wicking properties, even compressed, and does not have any stray taste. 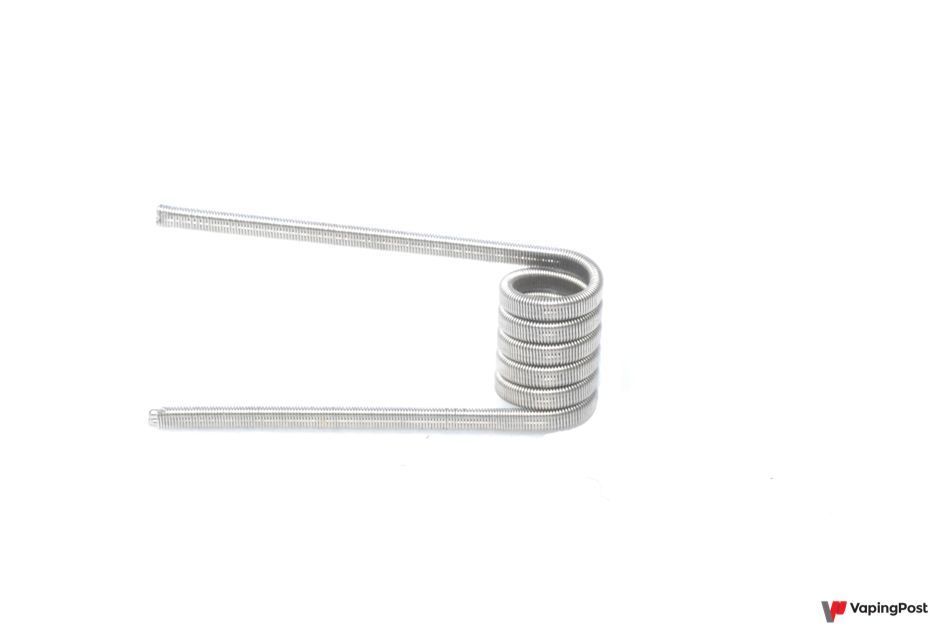 If mesh resistances are not your favourite, standard resistance coils can also be fitted. An Ni80 0.35ohm Clapton with an internal diameter of 3mm is also included in the box. For this type of assembly, the cotton must run through the two lateral channels, which are perfectly sized, without them compressing it. 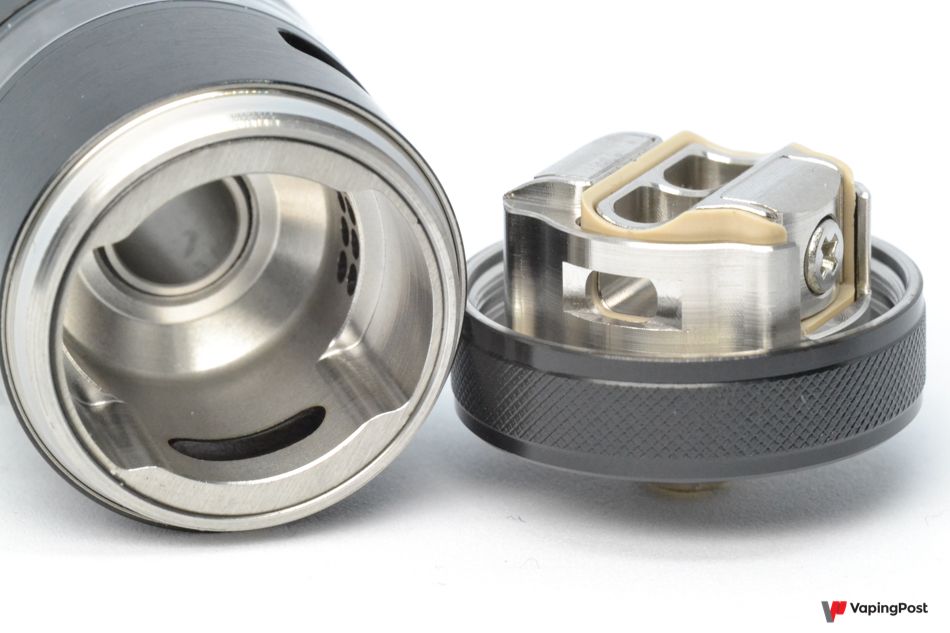 This deck can therefore be used for two types of assembly, both incredibly straightforward and not difficult at all. Hard to beat!

The mesh has the advantage of not being aggressive when you increase the power. With this type of resistance, vaping is gentle, pleasant and powerful with excellent feed to the cotton thanks to the short distance the liquid travels, and all without the slightest leak or condensation.

If a traditional coil is used, the experience is slightly more marked, but still just as pleasant. The hyper-reactive chipset is perfect and responds immediately.

In both cases, the flavours are excellent. The vapour depends on the resistance value of course, but the Siegfried is designed for power. It starts to express itself and give its best performance from around 60W out of the 150W it can achieve. In these conditions, the 7ml capacity of the tank is a real bonus.