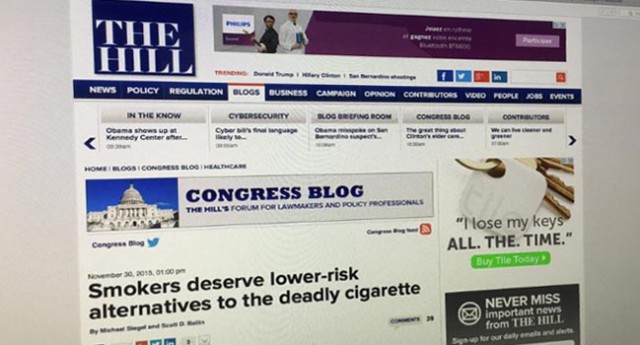 In the United States, publishing a story or an article in The Hill is one of the most effective ways to address the federal power. This is what Michael Siegel and Scott Ballin attempt by co-signing an article, last end November, under the title: “Smokers deserve lower-risk alternatives to the deadly cigarette”.

The two electronic cigarette in their political columns the “double standards” game of the federal government. The tobacco, responsible for the deaths of 400,000 Americans each year, is sold over the counter without any imposed administrative contingency.

Conversely, electronic cigarette manufacturers will most likely pay huge costs to endorse their products and to market them. These same products that currently present a risk profile much lower than the conventional cigarettes.

For the authors, the organizations fighting against tobacco are working anti clockwise and make the game of tobacco companies. Indeed, they are the only ones able to offer simultaneously vaping and tobacco cigarettes and the only ones to have the financial means necessary to approve their new products (disposable cigalike, tobacco heat …)

The question that is at the center of debate is the choice of the “grand father date” or “T0”, the date on which the notification procedure will be made compulsory. For tobacco, it was in 2007, and no brand on the market before 2007 had to follow this administrative process, none has been permitted since.

E-cigarette detractors try to match the “grand father time” for electronic cigarette with that of the tobacco and use the argument of aromas, that would be made attractive to seduce children, to scare the audience and influence political positions.

Michael Siegel and Scott Ballin are asking the federal government to adopt a more rational approach by regulating tobacco and nicotines products based on their proven and relative risks.