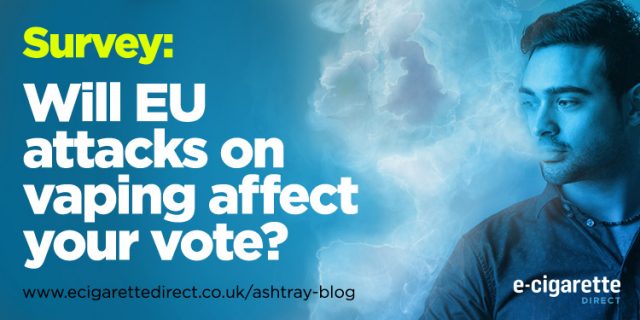 There are over two and a half million vapers in the UK.

Yet just weeks before the EU referendum, new EU regulations on e-cigs will come into force.

In fact, former chief of Action on Smoking and Health called the bill the ‘worst EU directive ever made.’

Meanwhile, some vapers are concerned that the author of the EU’s anti-vaping bill was accused of soliciting bribes from a tobacco company.

These new e-cig restrictions are just the first round of attacks on e-cigs.

EU Meps have been calling for taxes on e-cigs since 2013.

The EU plans to follow up this initial attack with punitive taxes starting from 2017.

Should we stay or should we go?

Yet not all vaping activists believe we should leave the EU.

And many vapers I have spoken to, while angry about the EU’s stance on e-cigs, remain undecided.

So how will the UK’s 2,500,000 + vapers vote in the EU Elections? Will your vote be affected by EU attacks on vaping?

To help us find out, I’d love it if you could fill in a short survey.

The survey takes just seconds to complete, and you’ll also be entered into a prize draw to win one of three Aspire Quest E-Cig kits.