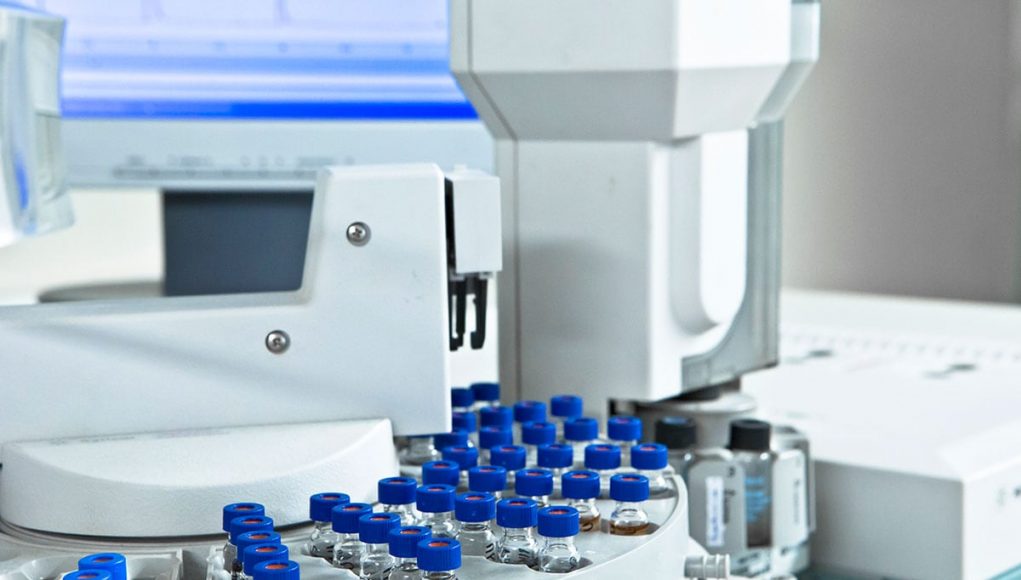 The federal Food and Drug Administration (FDA) recently announced that the agency is accepting public comments regarding additional constituent substances found in e-liquids, any other chemicals or chemical compounds and whether any should be added to the established Harmful and Potentially Harmful Constituents (HPHCs) list, as mandated under the Food, Drug, and Cosmetics Act.

In the Federal Register, the FDA elaborated on how it has identified up to 19 new chemicals that are present in vaping products and its intention to list any of these chemicals on the harmful and potentially harmful constituents listing. 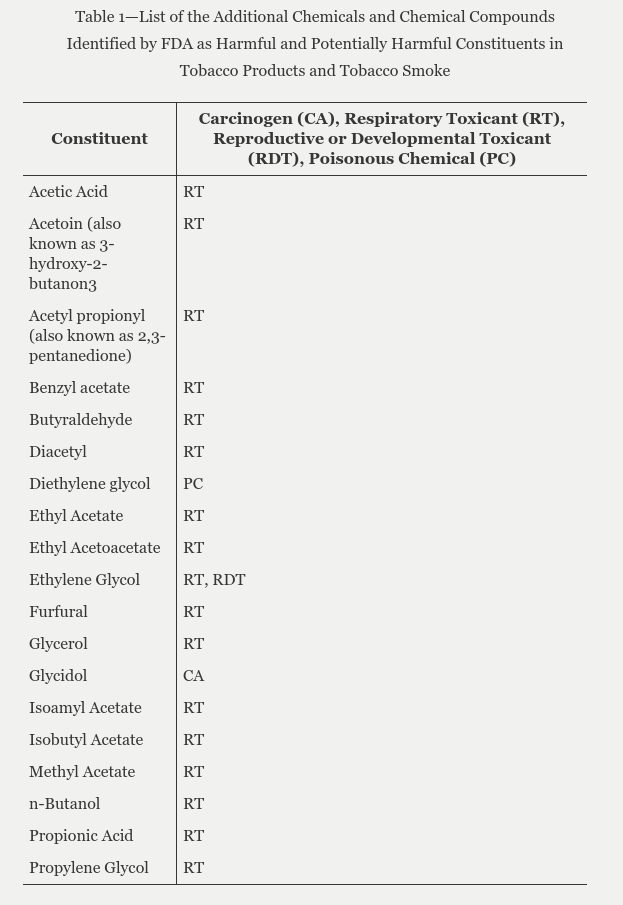 According to the notice for comment, some of these new 19 chemicals include glycidol, ethylene glycol through ingestion, diacetyl, and glycerol.

“As our oversight and scientific knowledge of tobacco products has evolved, so too should our requirements for manufacturers and importers to provide information about the chemicals or chemical compounds in their products that cause or could cause harm to users and nonusers,” acting FDA Commissioner Ned Sharpless said in a statement regarding the publication of the public request for comment. “We remain committed to meeting the important goal of ensuring the public can clearly understand the real and potential risks of tobacco product use as we work to protect kids and significantly reduce tobacco-related disease and death.”

This new request for public comment from the agency additionally coincides with the release of several new studies that question the toxicity of these constituent chemicals and whether ingredients that make e-liquids flavored are additionally toxic to humans over time.

While the push by the FDA could be welcomed from a caution perspective, the nature of the agency’s approach and the methodology of these mentioned studies inherently misses a key factor.

For the American Journal of Preventive Medicine, a team of researchers from Yale University’s Tobacco Center of Regulatory Science recently found that the liquids in select Juul pods contained potentially “contain throat-irritating” not listed on the product packaging. Through the use of a custom-built “vaping machine” that simulates puffs and draws, the researchers found that certain ingredients in the Juul pods could chemically react to create chemicals that can offer potential health risks.

This means that the ingredients liquid makers use could create acetals, or chemicals used in helping the creation of flavor characterizations. Acetals could irritate throats and even damage lungs over long term use. As noted, the team test Juul pods and only found acetals in creme brulee flavored pods and in pods that were at room temperature and no way vaporized in a capacity that simulates human consumption environments.

One of the key conclusions to this study found that regulatory approaches to e-cigarettes should consider means to curtail the existence of chemically reacted byproducts from vape aerosol. Head researcher for this study, Yale’s Hanno Erythropel, said that these findings are vital for not only regulations but manufacturers and consumers.

People often assume that these e-liquids are a final product once they are mixed, but the reactions create new molecules in the e-liquids … Researchers from Yale University's Tobacco Center of Regulatory Science, American Journal of Preventive Medicine

“People often assume that these e-liquids are a final product once they are mixed,” Erythropel argued. “But the reactions create new molecules in the e-liquids, and it doesn’t just happen in e-liquids from small vape shops, but also in those from the biggest manufacturers in the U.S.”

Erythropel certainly provides a valid point and offers another rigorous addition to the growing body of work, measuring the overall long-term harm and benefits to vaping. However, other researchers and Juul Labs noted that there several flaws to consider in this study, thus insinuating a state of misunderstanding and could predict some potential outcomes from FDA-led toxins regulation.

Juul Labs released a statement to several media outlets, including Vaping Post, that the researchers “failed to take into account real-world conditions, including realistic human exposure to vapor products like Juul.” The company spokesperson additionally noted that the machine that was used to mimic the vaping behavior wildly overestimates how much vapor a user would ingest after a puff or draw. As a result, this offers flawed depictions.

Michael Siegel, a friend of the Post and a professor of community health sciences at the Boston University School of Public Health, told me in an email that the flaws of any research like the Yale study and how they impact regulatory policy rest upon intentional or misunderstandings of the technical components of a vaping device.

“The reason why food-grade ingredients used in vapes could be problematic is that they have been approved as being generally safe when ingested,” he said. The study analyzed chemicals like propylene glycol and glycerol, which so happen to be on the list of the FDA’s request for more information regarding potential toxicity concerns. “In e-cigarettes, they are delivered via inhalation. The long-term effects of the inhalation of many of these chemicals has not been well studied. My main concern is not with the inhalation of propylene glycol or glycerin.”

He points out that it is the technical configuration of a device, the use of the device, and concerns related to overheating.

Vaping products that have careful temperature control, overcharge protection, etc., do not present a high risk of producing these unwanted chemicals.Michael Siegel, Professor of community health sciences at the Boston University School of Public Health

“My main concern is that when either propylene glycol or glycerin are heated to too high a temperature, they degrade into other chemicals that may be problematic, especially aldehydes such as formaldehyde and acrolein, which could be toxic if inhaled at high levels for many years,” he said. “Vaping products that have careful temperature control, overcharge protection, etc., do not present a high risk of producing these unwanted chemicals. However, products without these safety features could potentially be problematic.”

The FDA could potentially adopt regulations that mandate the creation and implementation of manufacturing standards that offer safety recommendations along with these parameters. One of the main reasons the FDA has taken a different regulatory approach is due to the nature of the premarket approval regulatory pathway. Also, know as PMTA, the regulatory approach established by the Tobacco Control Act of 2009 requires the FDA to review every aspect of a product, including marketing, content, impact on public health, and technological configurations including heat control protocol.

Since the FDA has ordered that all e-cigarette manufacturers must submit PMTA in less than a year due to a recent federal court decision, this could muddy things.

In other cases, the nature of the potentially toxic nature of e-liquid could be harbinger calls for policies that ban flavors. Greek researchers Konstantinos Farsalinos and George Lagoumintzis recently published in the Harm Reduction Journal a study concluding that flavoring compounds in e-liquids are commonly not as toxic as assumed by some toxicological analyses previously conducted.

“The vast majority of [flavoring compounds] in e-cigarette liquids as reported in a recent study were present at levels far lower than needed to classify them as toxic,” the researchers concluded. “Since exceptions exist, regulatory monitoring of liquid composition is warranted.”

Flavors, however, still pose no significant health risk when viewed in the perspective of helping vapers switch from tobacco to a vape. There is empirical evidence revealing that flavors help smokers stay onto vaping based on a public health intervention.

According to others, the apparent exceptions include the removal of diacetyl – the leading cause of so-called “popcorn lung.” While this substance is minimally present in many flavored liquids, Charles Gardner of the Foundation for a Smoke-Free World called the potential listing of diacetyl on the FDA’s toxins list a “no-brainer.”

“It is banned in the U.K. and (I believe) the rest of the E.U. even though cigarette smoke delivers 730 times more diacetyl to smokers,” Gardner said. “And none of them have ever been diagnosed with “popcorn lung.” No vaper has ever been diagnosed with “popcorn lung.” And, there are 42 million vapers worldwide. Further, my understanding is that most U.S. vape liquids no longer contain diacetyl.”

Based on what has been discussed throughout this piece, the case of misunderstanding that has been mentioned is based on examples of “preferred” science versus “dismissed” science. By no means is this an “alternative facts” argument; however, as demonstrated by these analyses, regulatory science related to e-cigarettes and liquids remains unsettled.

Granted, the FDA is merely conducting its due diligence as it relates to its statutory duty to conduct in-depth scientific analysis. However, the issues that could come from the above-mentioned request for public comment could be another biased crusade to further tighten the regulatory noose on the vaping industry. All science related to e-cigarettes is essential. Regulators and researchers need to remember that.