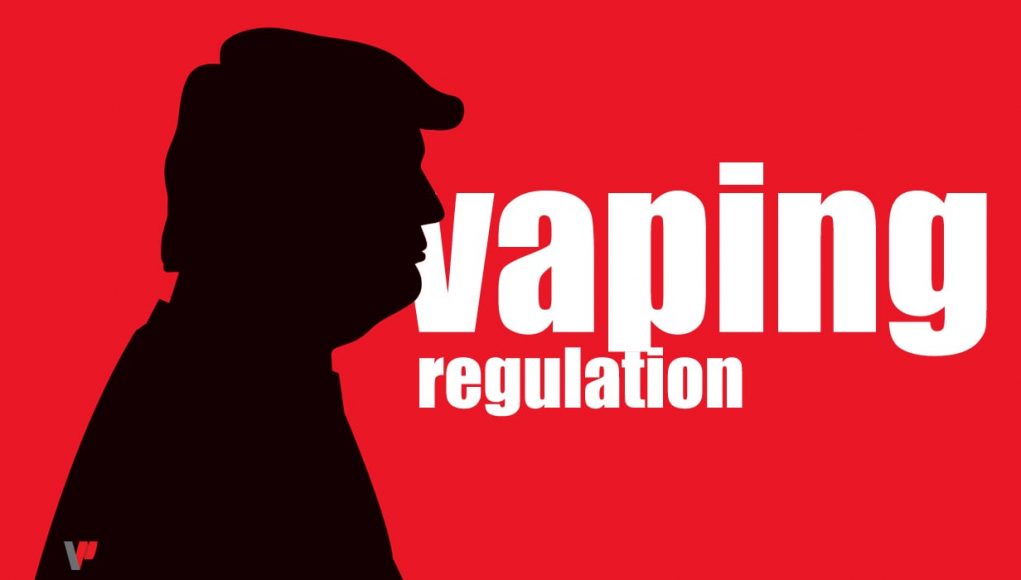 The following is a combination of editorial writing and reporting. The opinions expressed by the author do not  necessarily reflect the beliefs of those interviewed.

President Donald Trump blocked members of the vaping industry. The U.S. Vaping Association, in an interview with Vaping Post, accuses the administration of barring industry stakeholders from the regulatory process.

News outlets have reported that the president is potentially backing off any adverse policy that could negatively impact the health of the industry. The New York Times and The Washington Post both broke similar stories suggesting that key political advisers were able to convince him not to sign the official memo ordering the ban. This may appear to be a slight period of reprieve for the industry, but the concerns over prohibition loom. White House officials informed media that adverse action against vapor products could still come down the regulatory pipeline, ABC News reports.

Trump announced that he would ban flavored products ten weeks ago. Recent weeks saw the administration act unilaterally to approve final rules that violate a series of institutional standings.

In a brief phone interview with USVA president and executive director Travis Pinkerton and his colleague Brad Bennett, they recollected the process of how they engaged with the Office of Management and Budget to comment on the final rule. The OMB and its Office of Information and Regulatory Affairs (OIRA) are situated within an entity called the Executive Office of the President (EOP).

The EOP is a group of executive branch agencies that report directly to the president and the West Wing staff. Mick Mulvaney, the Chief of Staff to Trump, leads the EOP and holds a vast amount of power.

All of this pertains to the USVA’s experience for several reasons. First, OMB is instrumental in creating the administration’s annual budget proposal for congressional approval. Second, including the function of managing overall administration policies, the office also serves as a power center that places the appointed heads of the various executive branch agencies under a single entity that works directly for the president. Lastly, this is a function shared among other EOP agencies. OIRA, an agency within OMB, is tasked with overseeing the implementation of all draft regulations.

The Food and Drug Administration (FDA) filed its proposed final rules through an extensive collaborative process that requires the insight of all stakeholders. The so-called “nationwide flavor ban” is actually a proposal to finalize the PMTA compliance policy for all vapor products, as defined by the Tobacco Control Act of 2009.

That act gave the FDA strong powers to regulate various products as traditional tobacco. OIRA is tasked with fielding additional public and industry input on a rule like this “ban.” Pinkerton directed the USVA trade group to submit comments and request a meeting with OIRA officials to offer insight before a final draft rule is adopted.

The OMB canceled a previously scheduled meeting with the trade group.

According to a series of emails sent to us by the USVA, the OMB canceled a previously scheduled meeting with the trade group. Citing the completion of the public comment phase, an automatically generated OIRA email told USVA that their insight was no longer needed. After discussing with organizational counsel and his colleagues, Pinkerton told me that it became apparent that OIRA was stonewalling the USVA.

USVA found this contradictory to the administration’s “pro-business” tenant. Trump won in the 2016 election on a political platform that places an importance on small businesses and drawing back on certain regulations passed by the Obama White House. However, the events of the past few months prove that this is complete bull shit.

USVA reached out to the administration in an effort to engage in a civic process. Emails provided to us reveal contradicting narratives. Justin Gibson, a representative of the USVA, submitted a meeting request through an online portal managed by OIRA and OMB. The agency confirmed this meeting days later.

As mentioned, the agency then opted to move forward without the insight of the industry group. The implications of this action, despite the current state of affairs, is a slap in the face to a class of people that want to help smokers transition to vapor products.

Jerad Najvar, the principal and founder of the Najvar Law Firm, PLLC, in Houston, Tx., represents the USVA in a federal tort case that challenges the executive branch’s ability to unilaterally issue regulations without Congressional approval.

“Constitutionally, it isn’t Trump’s decision to make,” he said. “Trump is ultimately responsible for this. Trump is the head of the executive branch, and as the law is now, Congress imposes no restrictions on policy delegation.”

The TCA granted the FDA and the executive branch are unilateral power to make policy decisions that impact entire industries.

Vaping and tobacco harm reduction advocates must be informed and should stop wasting their time on Trump.

Trump ally Kellyanne Conway held a press conference earlier this month where she voiced the administration’s concern over the EVALI outbreak and youth uptake, for example. She provided the press with false information on how policy is implemented under HHS. What stuck in my craw with Conway’s remarks was that she told reporters that the FDA has no right regulating vape shops. I hate to admit this; but, she is entirely wrong. Vaping and tobacco harm reduction advocates must be informed and should stop wasting their time on Trump.

Trump is still a problem

Trump has appointed agency heads that have since compared e-cigarettes to heroin or have called for entire aspects of the vaping market to be outlawed. On top of that, the FDA and the Department of Health and Human Services are still mandated by a federal judge to formalize the PMTA regulatory policy.

I value the need for regulation, as the PMTA process could be a success if the process was reformed to be accessible for small businesses. Rather, Trump is to blame for much that has happened.

I briefly surveyed several experts and advocates. They all expressed skepticism that Trump is officially backing off on a formal policy regarding e-cigarettes.

Chelsea Boyd, a harm reduction research fellow at the center-right R Street Institute, says that there is no reason to trust Trump.

“I don’t know that Trump will be the frontman for anything that ends up happening, but I do think that we haven’t heard the end of this,” Boyd wrote in an email.

“I don’t think anyone should trust Trump,” Wade said. “His reluctance to sign a final order is telling.”

Konstantinos Farsalinos, the world-renowned Greek cardiologist who has endorsed vaping and tobacco harm reduction strategies as a viable public health strategy, wrote to me that he is unable to speak to these recent developments.

“I am quite pessimistic, and at the same time, we need to remember that the current US political establishment is a bit unpredictable (in many issues besides e-cigarettes),” he wrote.

“They will be announcing something, and we still have no idea what it will look like.”

“I agree with you that it’s difficult to trust anything the administration says,” Siegel wrote. “I do believe it is true that they have at least temporarily backed off the flavor ban, but they will be announcing something, and we still have no idea what it will look like. The only thing we know is that it is not imminent,” at this time.

Chris Howard, an attorney, and the chief regulatory officer for E-Alternative Solutions, recognizes a potential reprieve for the industry but does not write off the importance of continuing advocacy in its current capacity.

“The journey ahead is still riddled with obstacles,” Howard said pragmatically.