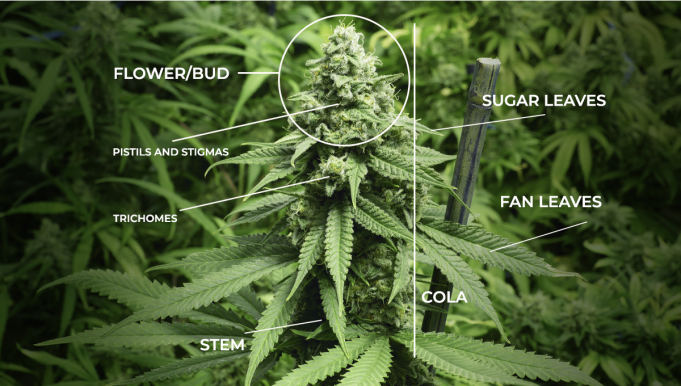 Now, how long does it take to grow marijuana? Anywhere between 4 and 8 months, depending on strain and growth factors. If you grow it indoors, where you can control as many factors as possible, it will flower faster than when done outdoors.

In this article, we look at the various parts of a pot plant. You can get more information on strains by googling “marijuana dispensary near me.”

They are produced by the female plant and are responsible for the next generation of your cannabis. They grow a taproot that holds it together during growth, providing all the nutrients it will need from the soil. Thanks to marijuana legality, you can now buy several seed varieties within the US.

When you see the cotyledon leaves shoot after gemination, you know you have successfully grown cannabis. Leaves are the first thing to grow from this plant. Fan leaves have little value, but sugar leaves have some trichomes and should be harvested.

They develop taproots from germination to get the necessary supply of water and oxygen for growth. These roots start from the central stalk to the ground, and a farmer can improve the health of their soils using some beneficial fungus.

The stem starts from the root system to support all the branches, so it is safe to say it offers the plant all the support it needs to grow. After five nodes, most farmers will cut off the top of the stem to force lateral growth that allows for more bud sites.

Node points represent the parts where branches grow off the stem. The male and female parts of the plant will appear on the nodes, letting you know the gender at pre-flowering. You know whether it will grow tall or short from the internodal spacing, which is the space between nodes.

A bract encloses the female reproductive system of a cannabis plant. They show up as tear-shaped “leaves” covered in resin glands that have the highest concentration of cannabinoids. The calyx, which forms a layer over the ovule, is not visible.

These have everything that matters in a pot plant: trichomes, cannabinoids, and terpenes, and a grower will be going for this when they finally start harvesting. It is also called ‘bud’ and is the smokable part. When harvesting, a grower has to handle them with care to leave the trichomes intact.

These have large amounts of resin, cannabinoids, and terpenes, and so they carry all the psychotic effects that you want from a cannabis plant. They cover the flower to protect it from the elements, tiny predators, and other detractors that may prevent you from getting the best harvest. Trichomes should cover a healthy plant to ensure it goes through all the stages of growth without being overwhelmed by the elements.

How to Tell the Gender of Marijuana Plants

You may have seen enough content on the feminization of cannabis seeds, and this is because only the females contain the cannabinoid and terpene-rich buds ideal for smoking. Growers want these when they buy seeds, so most will always ask for this. Seed developers are keen on feminization.

Only the female cannabis produces smokable buds. The male plants are primarily for pollination, but female parts pollinated by male plants use more energy to produce seeds than smokable buds. Solution: Scientists came up with Sinsemilla cannabis – or sensi, a seedless pot plant from unfertilized female cannabis. The male plants are removed from the garden to ensure a more potent and richer harvest/crop. Male plants do not flower, so they are easy to tell apart from their female counterparts.

Around four weeks after the growth process starts, you will start to see the subtle changes that let you know what your garden carries. The male marijuana plant will have tiny sacs that carry the pollen, while females develop two bracts that eventually develop into the stigma. If a grower is highly interested in seeds, they will allow the male and female plants to grow together so they can use the seeds for the next generation. Growers also allow pollination when crossbreeding strains.

Like hermaphrodite humans and animals, such seeds can self-pollinate since they have male and female organs. However, this is discouraged by growers as it leads to the passing on of these hermaphroditic genes. This genetic disorder in cannabis plants happens due to these reasons:

There are two types of hermaphrodites; true hermaphrodites and “bananas.” True ones have the male and female reproductive organs, so you will notice pollen sacs and female parts on the same plant during the preflower stage. When it’s time to flower, the pollen sacs rupture and displace the flower, effectively breeding itself into other plants with the same traits.

“Banana” hermaphrodites get their name from their resemblance to the fruit they are named for. They produce a stamen within the female flower that they use to self-pollinate. Plants become hermaphrodites from the stress factors we mentioned above that cause them to speed up their growth when they start to ‘panic’ that the male pollinator is taking too long. You can avoid this by ensuring a stable environment for the whole period that your plants are in the garden, whether grown indoors or outdoors.

You can tell these plants from the rest due to the presence of buds, pollen sacs, or anthers in the same plant. Once you establish that they are compromised, it would be best to remove them from your garden if you do not want the process to spread into the next seeds.

Are you as fascinated as we are by this plant? There is so much to learn about marijuana and the resulting products, and you can learn even more from talking to a budtender at a nearby marijuana dispensary or online. Now you may understand why growing this plant takes so much effort and time.