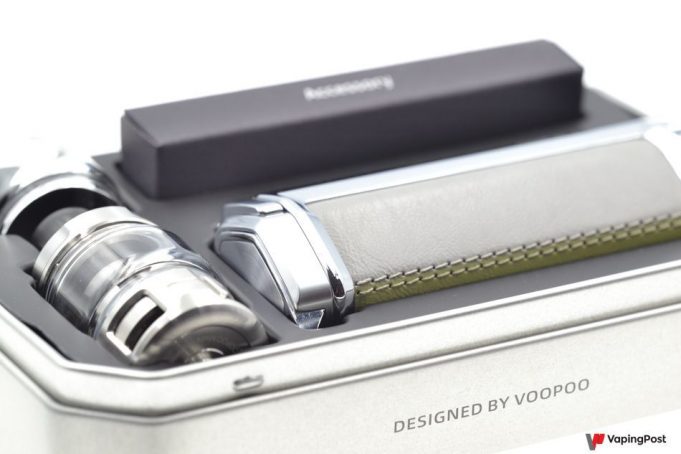 The Argus XT is water, dust and shock resistant. It also has a really well-designed locking system and delivers an enjoyable vape experience. Practically perfect, it’s a coherent piece of design and a well thought out piece of kit. 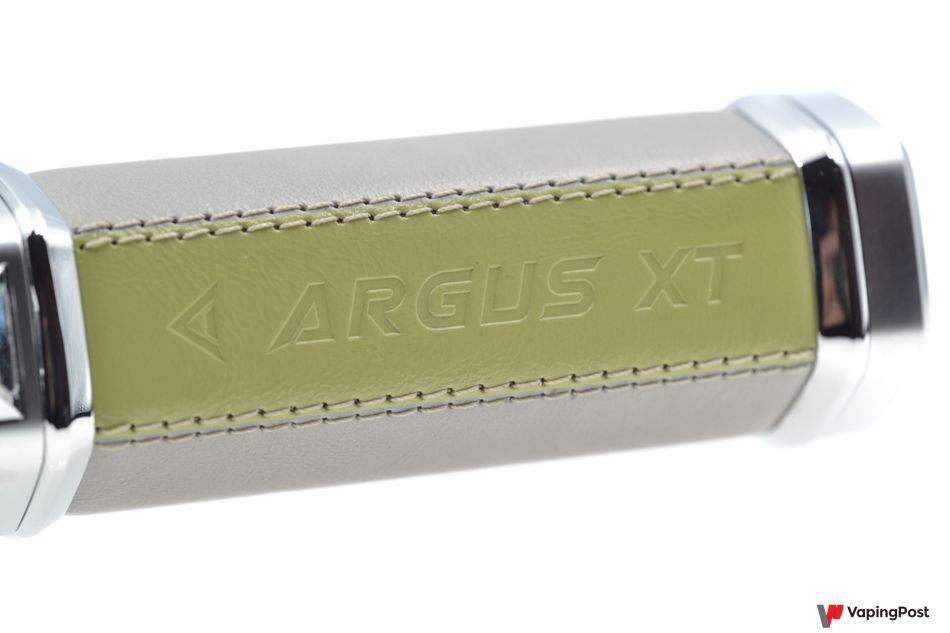 The Argus XT is comfortable to hold and ergonomic. The leather-look insert is quite thick and feels more organic to the touch. Overall, it’s finish is excellent. The only thing we didn’t like was the slight play of the trigger button in its housing, and the cover which looked plasticky which is a shame because the box is actually made of an alloy.

What’s potentially more annoying is the strong smell the box gives off. It smells a bit like machine oil, but we can’t see any trace of oil. That brings us neatly onto testing the box’s resistance. Being IP68 certified, it’s supposed to be water, dust and shock resistant. A rinse under the tap, a wash with a soapy sponge and a thorough rinse left the box smelling like clean dishes – and nothing more. Even after this treatment it worked perfectly and the battery compartment was still dry. 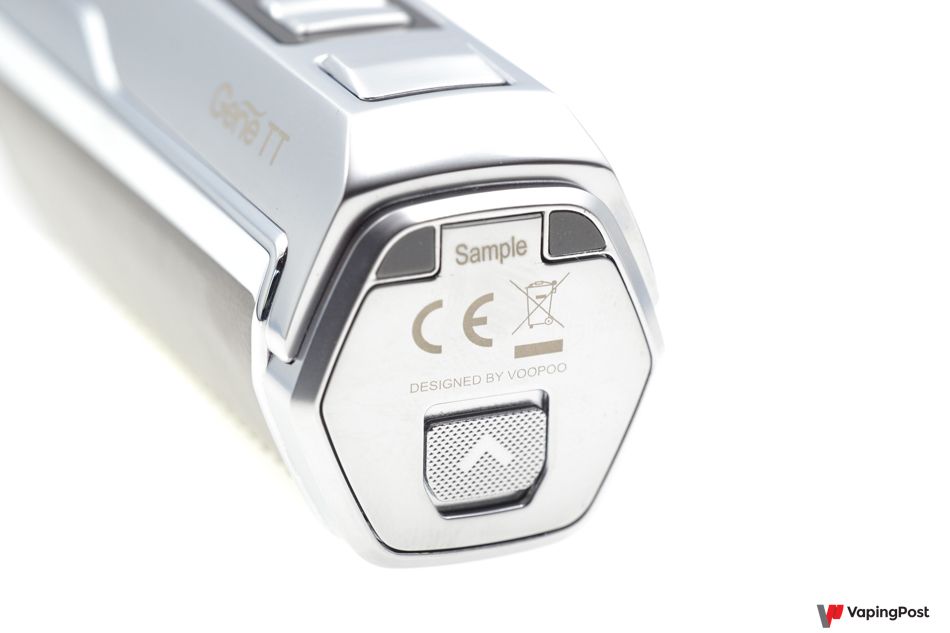 The battery compartment is easy to open – just slide the little tab on the door. This mechanism is easy-to-use and looks solid enough to last. Although using a 18650 battery means you have to use the adapter supplied, the box can actually recognise which battery you’re using. 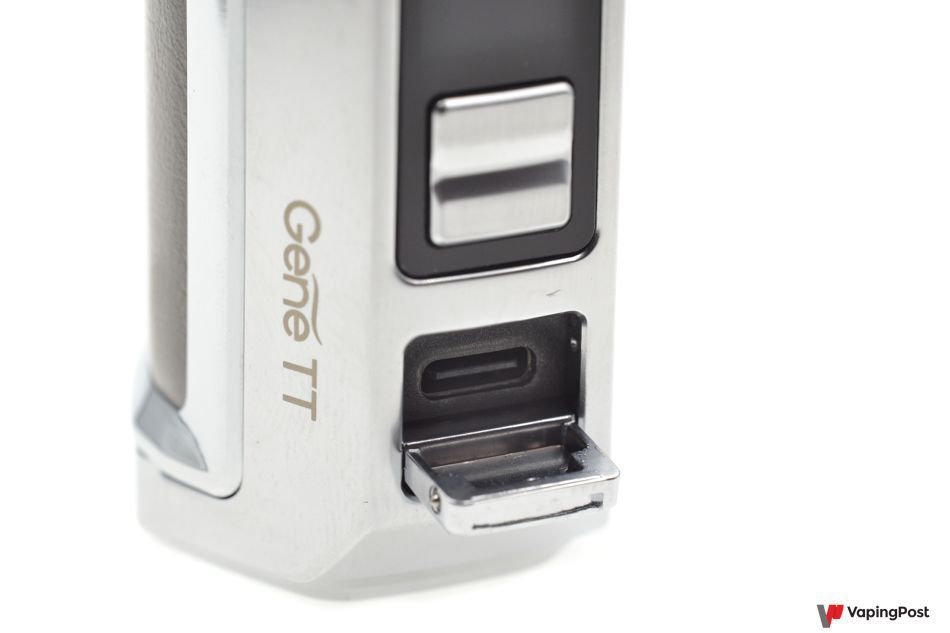 The built-in USB-C port means you can recharge your Argus XT fast. Voopoo has announced 3 A charging which would mean a full charge for most batteries in about an hour. That’s handy if you’re short on time, but slower charging with an external charger is better for battery life in the long term. 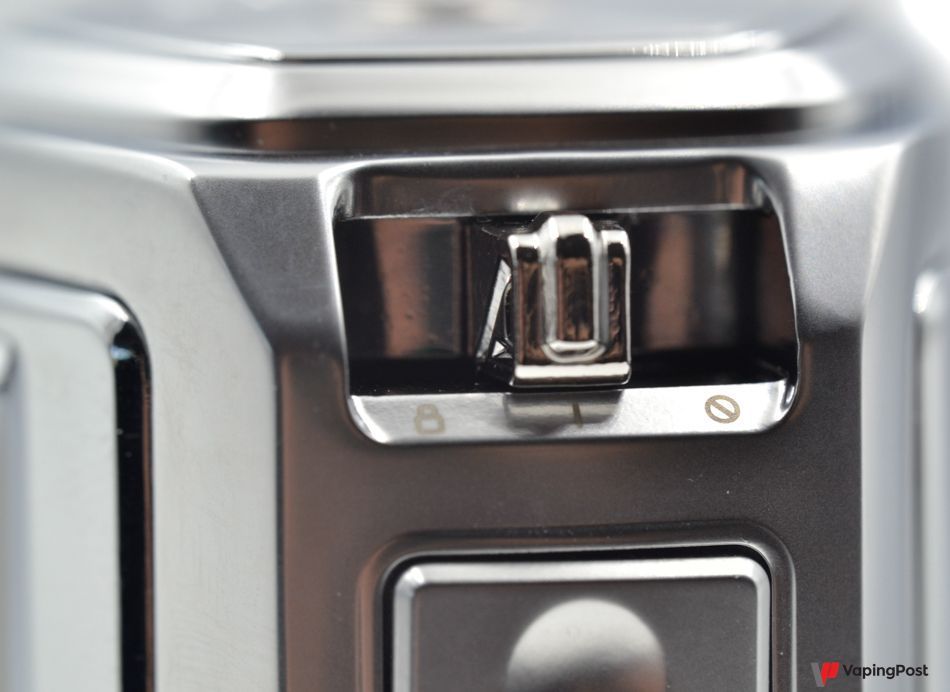 The highlight for us has to be the switch on the top of the box. It’s just under the atomizer and has three settings. It’s big enough to use easily, but flush enough to the surface that you won’t press it by accident, for example if it’s in your pocket.

Moving the switch to the left locks all of the controls. Moving it to the right locks the settings buttons but still allows you to vape. To adjust any settings, just move it into the centre. It’s easy, intuitive and remarkably functional: right to vape, left for in your pocket and centre to adjust the settings. 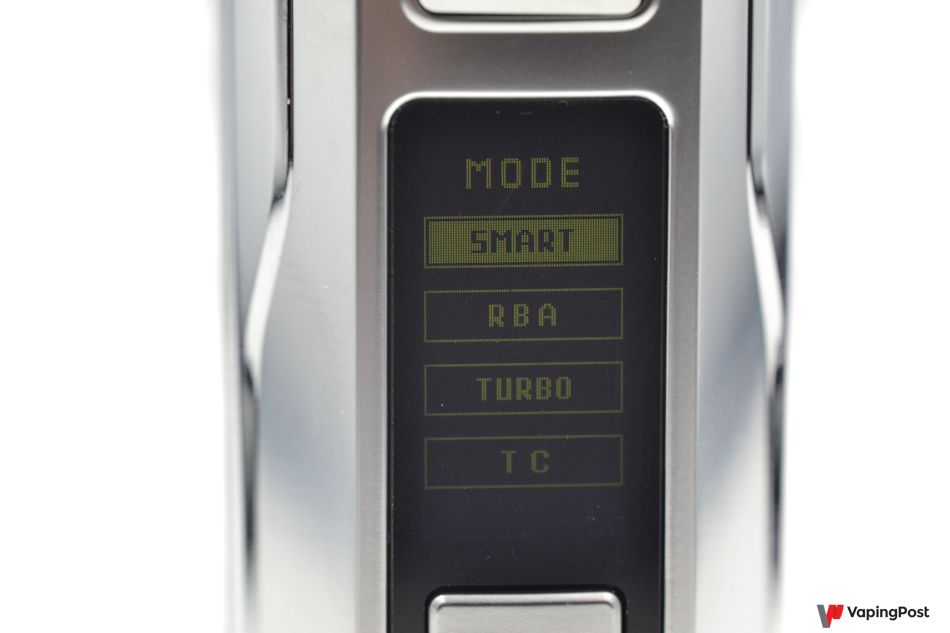 You access the menu by pressing both settings buttons at the same time, which is easy because they are laid as if they were only one button. The vape mode setting lets you choose between “Smart” mode, which limits your power range depending on the coil you’re using, “RBA” mode, which lets you adjust the power freely between 5W and 100W (80W with a 18650 battery), “Turbo” mode, which delivers 25% more power during the first second of a puff, and “TC” mode for temperature control when you’re using wires made of titanium, nickel or stainless steel.

Being able to choose the power level in “Smart” mode makes sense if you’re using the brand’s own coils, but not really if you’re using an atomiser by another brand. It is still useful though, as being able to limit the available power range adds a level of security that is always helpful.

The box also lets you set the display brightness and display time, and even has a puff counter. 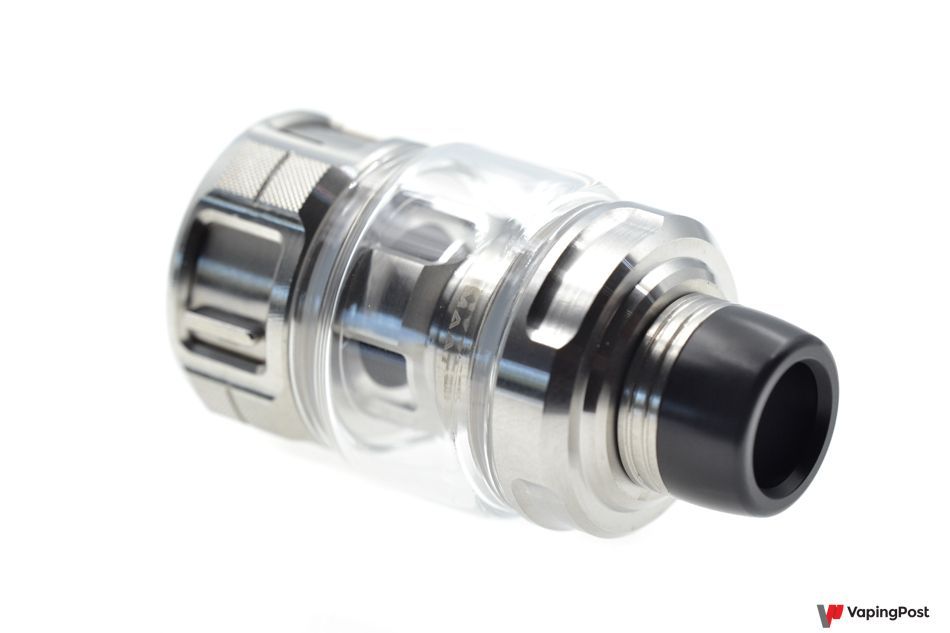 The “MAAT Tank New” is the latest version of … er… the Maat Tank. If you didn’t guess that one, not to worry. You’ve probably been busier looking out the window than listening in class.

The MAAT Tank New is huge, but that’s what allows its tank to hold a whopping 6.5ml of liquid. This capacity is really useful, because it’s obviously designed for making massive clouds. The coils it comes with are designed for just that. The 0.15 ohm TTP DM1 is recommended for 70W vaping, and the 0.2 ohm TTP DM2 is for 50W vaping.

Installing the coil in the atomizer is a breeze. You just unscrew the base, fit the coil into its housing and screw it all back together.

The drip tip has been specifically designed for this model and is a compromise between the 510 and the 810. It looks a lot like a standard 810, so it’s pretty nice and well adapted to this vaping style. 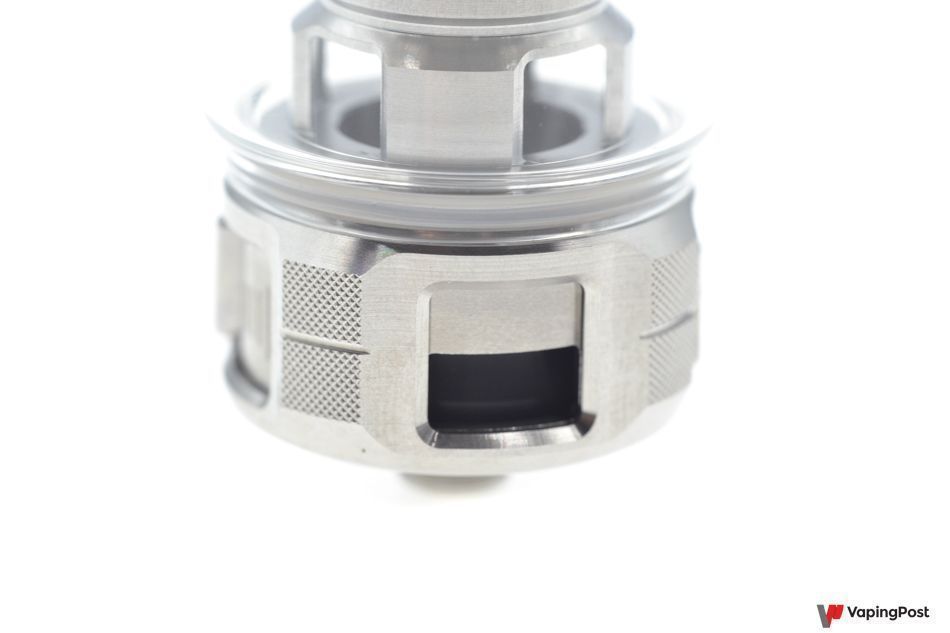 You adjust the air intake by sliding the lever at the base of the atomiser. It’s easy to use and accurate, but once it’s in place it won’t budge. It’s a great example of quality machining. 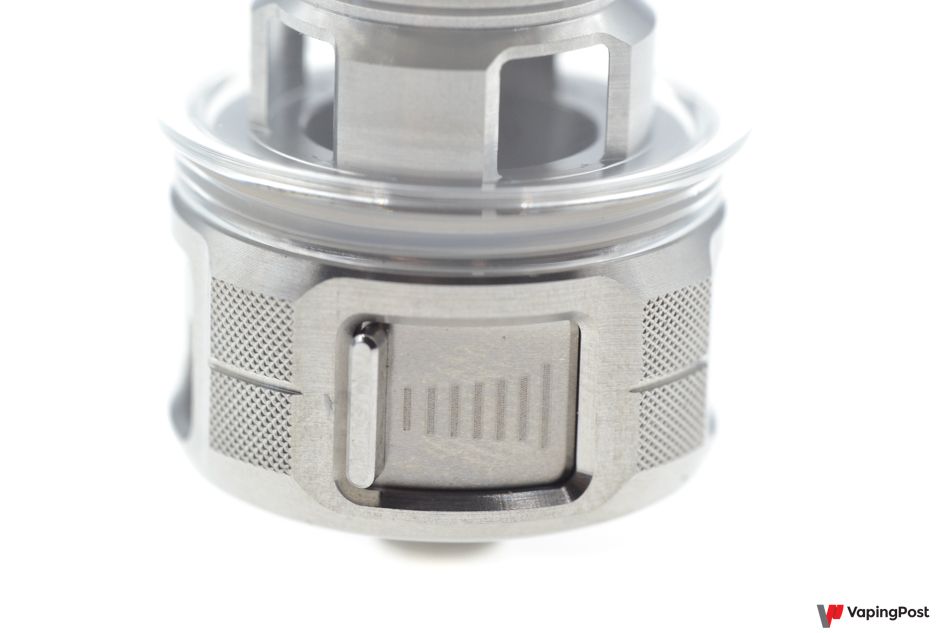 The air intake itself is pleasing and fairly quiet. Whichever way you look at it, it’s pretty airy which suits the very open direct draw for this vape. These new coils deliver a vape that’s not too hot and packs a flavour punch.

To fill it, unscrew the top a quarter turn to reveal the silicon seal covering the top of the clearomizer. The two small filling holes mean you have to use a bottle with a fine tip. But with a little care you can cut away the thin silicon membrane to access the larger opening of the tank itself. That means you can use any bottle with ease, without compromising the leak tightness of the atomiser. 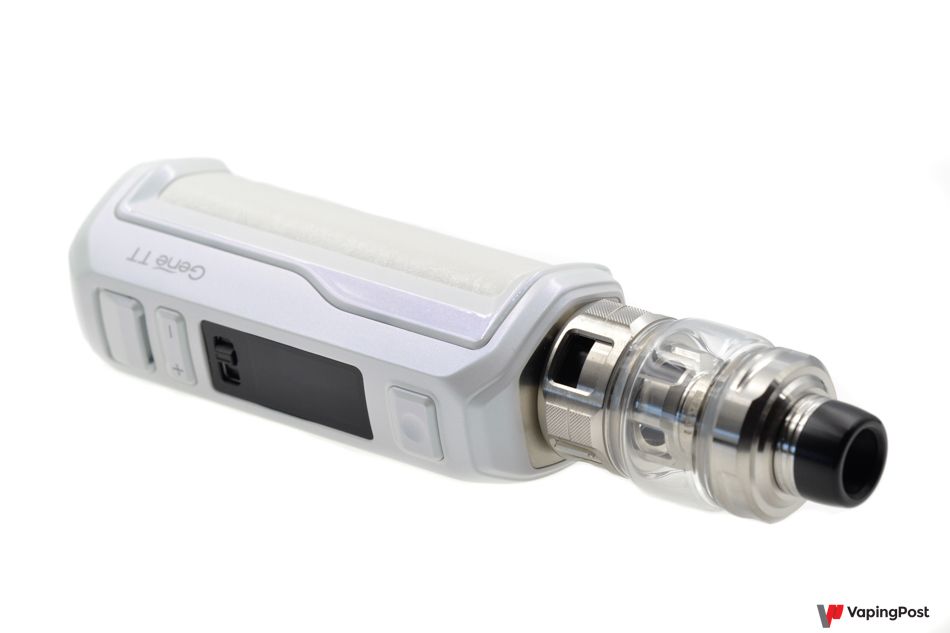 The MT kit is similar to the XT kit but has a built-in 3000 mAh battery.

Review 0
A compact kit with a long battery life which lacks flavour The Drag E60 is compact and perfectly made. Its built-in 2550 mAh battery offers...

Pod 0
Simply practical Under its minimalist design, the Xros 3 has all the essential features of a pod designed both for beginners and more experienced vapers....