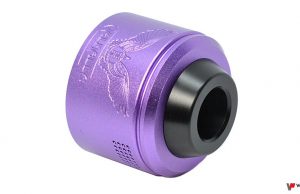 The Reload 26 RTA by Reload Vapor is the dual-coil version in their atomizer range.

It offers dense vapour, intense flavours and superbly quiet operation. If you use it for direct inhalation vaping, it controls the top air intake well and doesn’t leak at all, which we really like.

It’s easy to assemble too, as single- or dual-coil, although a single-coil set-up isn’t very interesting in this version. Direct inhalation: one breath or more?

Among other things, vaping is about fashion or more precisely, what’s popular at any one time. Indirect vaping was all the rage for a while, then moderate direct vaping arrived, followed by increasingly higher powers that have now brought us back to a more reasonable average. Vapers have a wealth of direct vaping devices to choose from as a result.

Atomizers for direct inhalation can be grouped into two main categories: single- and dual-coil, and some models can even do both. Single-coil vapes, i.e. those designed to hold a single-coil assembly, work better at vape powers from 20 to 100 W. They have the advantage of being easier to assemble. Atomizers designed for dual-coils can hold assemblies with two coils, which are usually mounted in parallel. They are normally used at 50 to 200 W. Assembly is a bit harder since both coils have to heat up in the same way and at the same rate. That’s not too complicated in itself, but making two coils that heat up equally is a little trickier. Some atomizers can take assemblies with three or four coils, but they are only suitable for the highest vape powers and are still fairly marginal.

Other assembly types have come onto the market for direct vaping atomizers, notably the mesh assembly. The mesh is a thin metal grid, usually made of stainless steel. The name comes from the sheets of metallic fabric used for wicks in genesis atomizers, which enthusiasts used to struggle to fit them onto a few years ago. Mesh coils are commonly used in clearomizers, where they give amazing performance. They haven’t been as successful with reconstructables, probably because they don’t offer the same flexibility or as wide a range of options as conventional coils. They also often tend to use huge quantities of liquid. All of these limitations have hampered their success in reconstructables.

What is the standard format?

The standard diameter a few years ago was 22mm, and almost all atomizers were that size. Now 24mm has become the most popular diameter. Now it’s mainly MTL atomizers that are 22 mm, as these come in both formats. For direct vaping, 24mm is used most often, followed by 25mm, which is also common. There are other formats too, and depending on the model can range from 26 to 40 mm. Make sure they can fit into your box to avoid turning your device into an unwieldy assembly with an oversized atomizer. Although it doesn’t matter so much when you’re using a box, it’s often criticised by tube enthusiasts.

Adapting the rest of your kit

You need to consider two key factors to make sure your atomizer is suitable for direct vaping. The first concerns the box, which must be able to deliver the power you want to use but still offer reasonable battery life. Single batteries can go up to 80W in 18650 and 100W in 21700 sizes. Beyond that, you’ll need to switch to a double battery. Having two batteries always doubles the battery life, which makes life easier but makes your device a lot bigger. The second factor is to do with liquids. Standard 10ml vials may still be fine with moderate use at reasonable power. But at higher powers or for intensive use, the larger bottles usually used with a booster mean you can keep the cost of your liquid within a reasonable range. You may want to think about DIY if you use a lot of liquid.

How much does a vapour atomizer cost on average?

The average price of a vapour atomizer is generally between 25 and 80 Euro.

Which vapour atomizer is the best?

After extensive testing, experts at The Vaping Post have named the Reload 26 RTA by brand Reload Vapor the best vapour atomizer.

Will I still be able to enjoy my e-liquid flavours with a vapour atomizer?

Yes, a vapour atomizer will allow you to enjoy your e-liquid flavours. Nowadays, although this type of atomizer isn’t quite as good at rendering flavour as an atomizer intended for that, it will still deliver a very satisfactory vape quality.

Are vapour atomizers an effective way to quit smoking?

What capacity should I choose for my vapour atomizer?

We’d recommended a vapour atomizer with a capacity of at least 4 ml. Otherwise its high consumption will have you refilling it all the time.

What power should I use with my vapour atomizer?

For assemblies made using low-resistance coils, you’ll have to vape at a high power, sometimes more than 50 W. But remember – the more the coil heats up, the more the e-liquid can degrade. In other words, the more you vape at high power, the more likely it is that the vapour you inhale may contain potentially harmful compounds, like aldehydes.

Do all batteries work with a vapour atomizer?

Yes, all boxes work with a vapour atomizer. But if you want to go for a dual-coil atomizer so you can vape at very high powers of 100 W or more, then you’ll need two or even three batteries.

Can I fit any type of coil in my vapour atomizer?

No. We’d advise using coils that are made to work with it. In a vapour atomizer, coils usually have to have low resistance so they heat up a lot and make lots of vapour. Some vapour atomizers can also work with two coils at the same time.

How do I adjust the air flow in my vapour atomizer?

You can adjust the air flow in your device as you like. That means you can use your vapour atomizer with the most restrictive air flow it has, which is usually very airy anyway, compared to an indirect inhalation atomizer for example.

Can I use any type of e-liquid with my vapour atomizer?

Yes. There’s no reason you can’t use any liquid you want with your vapour atomizer. However, if you want to get into cloud chasing for example, choose products with a high vegetable glycerine (VG) content, a compound that’s much less harsh than propylene glycol (PG) when used for high-power vaping.

Can I use my vapour atomizer for indirect inhalation?

There’s no reason not to use your vapour atomizer for indirect inhalation. Just remember that they’re designed to work with direct inhalation, so they’ll give you much lower vaping quality if you use them another way. But there’s nothing stopping you from trying it and making up your own mind!

Should I choose a vapour atomizer that works with one or two coils?

If you only want to vape with an airy inhalation device, any single-coil atomizer, i.e. one that works with just one coil, will work for you. Dual-coil atomizers are really the territory of a minority of vapers who want to make large vapour clouds.

When should I change the coil in my vapour atomizer?

We advise changing the coil in your atomizer as soon as you notice the slightest change in the taste of the e-liquid. As this kit uses large quantities of liquid, you’ll need to change the coil often.