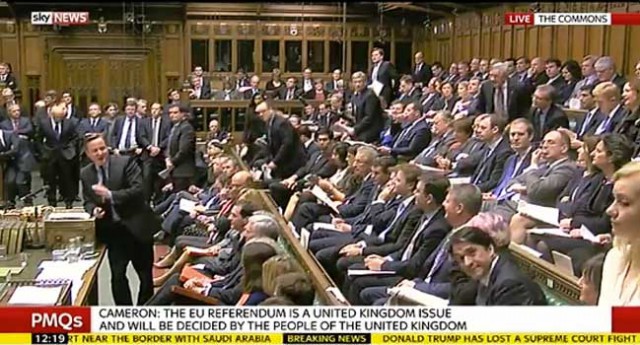 “So I think we should be making clear that this is a very legitimate path for many people to improve their health and the health of the nation.” -D. Cameron
At the session of Prime Minister’s questions on Wednesday December 15 at the House of Commons, Mark Pawsey, a member of the British parliament, deeply invested in smoking issues and advocate for harm reduction devices wished to hail David Cameron on this topic.

According to the parliamentarian, the Public Health England (PHE) recently mentioned that e-cigarettes are 95% less harmful than conventional cigarettes but half of the population is not aware of this information. He therefore asked the Prime Minister if he would be willing to join him “to highlight the role that e-cigarettes can play in helping people to quit smoking for good.”

David Cameron nodded again, and acknowledged having been “through this battle a number of times, eventually relatively successfully” he explained that many people find different ways to quit and “for some people e-cigarettes are successful”.

“it is promising the see that over all, one million people are estimated to have used e-cigarettes”

For British Prime Minister, following experts’ advices is important and, looking at the PHE report, he recognized it “promising” that nearly one million people have stopped smoking thanks to the electronic cigarette.