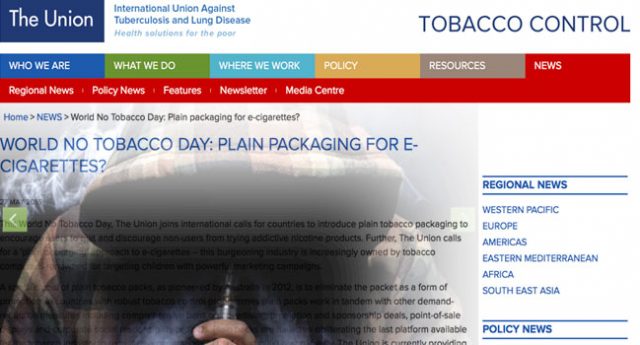 The Union’s Department of Tobacco Control in Edinburgh (UK), a global leader in the fight against tobacco use, seized up the World No Tobacco Day to follow in the footsteps of New Zealand and promote plain packaging for cigarettes but with a surprising bonus with regard to e-cigarettes:

“The Union calls for a ‘plain packaging’ approach to e-cigarettes – this burgeoning industry is increasingly owned by tobacco companies renowned for targeting children with powerful marketing campaigns.”

We welcome the EU TPD that “limits e-cigarette marketing”

At the head of the Department, Dr Ehsan Latif, declared with regard to marketing of e-cigarettes that “The tactics being used to promote e-cigarettes are eerily similar to those used to attract young people to smoke traditional tobacco products“. The former pediatrician also added, “Product design must also be standardised to reduce attractiveness and to prevent children consuming toxic liquids“.

The arguments put forward in the press release address the appeal of e-cigarettes for the youth. Fearing the gateway effect to smoking among youth is kind of a motto for anti-ecig advocates, a fear that was probably justified three to four years ago but that no longer stands with recent publications. The ASH recently demonstrated that e-cigarettes were not interesting non-smokers and, regarding the youth, researches on behaviourial patterns demonstrate that, even if they are using e-cigarettes, the young are rather interested in a way of socializing themselves than by the effect of nicotine.

To directly address Dr Latif’s concerns on a potential gateway to tobacco, a British study carried out by the University of Cambridge swept away the remaining fear that 11-16s may be catching the habit and switch to smoking.

“we must focus on countering the economic and legal tactics”

Dr Latif’s commitments at the head of the Department are “to continue with established work to limit demand for tobacco, but also develop new approaches to reduce the supply. And crucially, we must focus on countering the economic and legal tactics now being used by the tobacco industry to obstruct and delay life-saving public health policies.”

The latest report issued by the Royal College of Physicians encourages the use of e-cigarette in a tobacco harm-reduction perspective; in addition it qualifies “illogical” the big warning labels on vaping products that may deter smokers from using vaping devices. This places the ENDS and especially the personal vaporizer in a good place to limit the demand for tobacco and certainly not goes in promoting a “plain packaging” approach to the product.

Secondly, it seems highly controversial for an Agency that aims at counteracting economic and legal tactics in the domain of tobacco to so greedily welcome the EU TPD. Even the central actors of the directive recognize that “regulations [were] scripted in Brussels by pharmaceutical companies“, and judge the TPD “the product of big-company lobbying and back-room deals in Brussels.”

An finally, backing such a measure for the sake of Public Health is, if not irresponsible, at least a proof of misinformation. Let’s remind that NHS Greater Glasgow and Clyde lifted a ban on vaping on its grounds, as declared by Director of Public Health, Dr Emilia Crighton. A decision that has been closely followed by Nottingham University Hospitals NHS Trust.