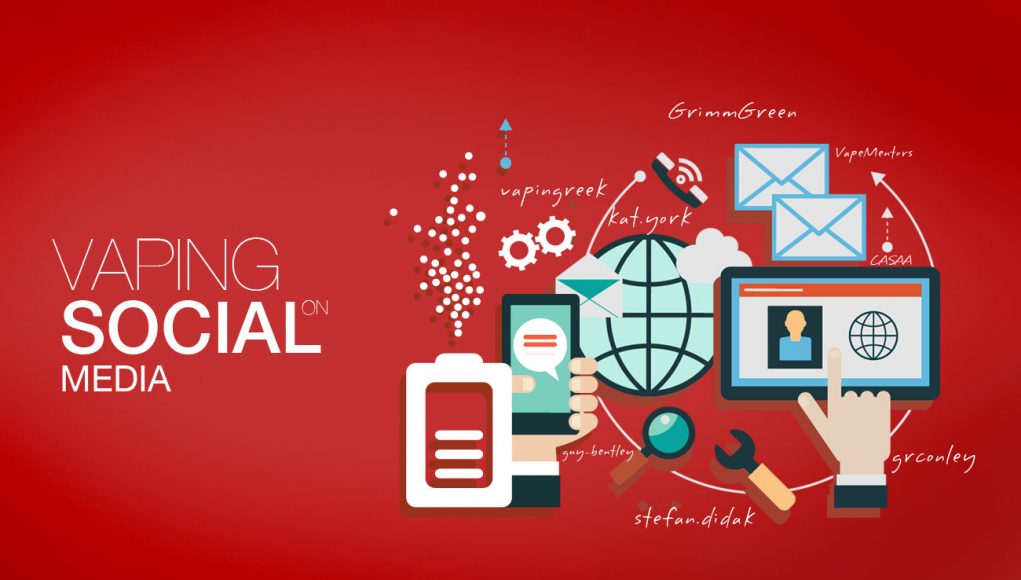 If there is one thing I’ve always said and it remains to be true to this day, that is, the Vaping Community is an Online Community. Whether Facebook, Twitter, Instagram, YouTube, etc. Social media is stronger than ever, especially for the vaping community to express themselves, communicate amongst one another, discover new products, get involved with advocacy, meet new people with similar beliefs and interests, join groups of like-minded people, debate the some of the unethical business practices, get up-to-date details on the deeming FDA regulations, watch new product reviews, read e-Liquid reviews, share your own thoughts and opinions or comment on others’ remarks – honestly, I could continue going on and and on, the options are nearly endless with what you can accomplish as a vaper on social media.

What I feel is the best option when being involved with social media or perhaps just surfing the web, is the fact that you can get very close to “insider info” – vapers love to be the first ones to break the news on the latest stories revolving around anything vape-related. As of current, the most significant topic constantly swirling around the vape-realm is the enthusiasm for advocacy. All those who are considered to have impactful voices within the vaping industry are all campaigning for the vape community to rally around the concept of vaping advocacy, and rightly so, given the severity of the FDA regulations that were recently announced on May 5th, 2016. Two dates that all vape advocates will remember is undoubtedly May 5th when the vaping regulations were announced and May 10th when those regulations were published.

Regardless, whether you’re new to vaping or already involved in Vaping Advocacy, there are a plethora of well-known names you should be following if you desire “Insider-Info.” First and foremost, one of the most reputable “Vape-famous” individuals you should be following on the web is the very knowledgeable, widely-known vaping advocate, none other than “GrimmGreen” aka Nick Green (note: I do not typically use nor do I recommend using the term “vape-famous” – however, it is necessary given the content we’re covering right now). GrimmGreen is anywhere and everywhere on social media, he has accounts on Facebook, Twitter, Instagram and of course YouTube (https://www.facebook.com/GrimmGreen). Not to mention his own personal website provides some of the most helpful information you could possibly need. Green truly understands that the vaping community is without a doubt an online community and has quite the impressive following of vapers from all over the globe. Nonetheless, GrimmGreen is by far one of the most trusted sources of vape-related-information.

Some other highly respected, reliable and well-acquainted vape-related voices who are connected with groups that are known specifically for advocating on behalf of the vaping industry, are the “VapinGreek” aka Dimitris Agrafiotis (https://www.facebook.com/vapingreek) and his good friend Phil Busardo . These 2 are all over the top Internet vaping sites which many tend to flock to. Personally, I first discovered these two gentlemen on YouTube. Along with GrimmGreen, these are probably the most well-known, widely-trusted sources for vaping information. They are indeed very resourceful and attract many vaping followers. It is highly recommended to follow their work across all social media outlets.

Furthermore, I must mention the relevant content that Stefan Didak, who is the founder of NOTBlowingSmoke.org, extends far and wide across multiple social media outlets. Didak  (https://www.facebook.com/stefan.didak) started the “NOTBlowingSmoke” campaign in response to the California Health Department’s “StillBlowingSmoke” campaign which is directly against the mere existence of e-cigarettes and vaping. Stefan tends to make a number of promotional/educational videos or short commercials which could be considered public service announcements where he first posts on his organization’s advocacy website. Stefan wastes no time at being as straightforward as possible about the most important messages which often need more attention, especially the concept of not falling for the deliberate spreading of misinformation, specifically in his home state of California.

The actions taken by the California Department of Health have been reckless and misleading, to say the least. So misleading, that the Royal College of Physicians and Public Health England have recently highlighted the CA Health Dept.’s irresponsible claims that vaping is just as dangerous as smoking. Stefan Didak shares important updates on his site and across all other social media channels via the world wide web and is a great help for staying informed. NOTBlowingSmoke.org has relevant articles posted under main menu sections of the website titled as Economy, Science, Reality and Facts.

Some other known sources considered to have a vapor-industry knowledge-base especially in legal matters are Greg Conley from the American Vaping Association as well as Kat York from Boosted Premium e-Liquids. Greg Conley (https://www.facebook.com/grconley) is an attorney for the vaping industry and President of the AVA. He is quite possibly one of the most recognizable names in vaping advocacy and is a supporter of all states participating in advocating.

Kat York (https://www.facebook.com/kat.york) is a lawyer who represents Boosted e-Liquids, as her husband is the creator of the successful juice-line. They are both largely reliable, respected, highly sought-after in all things related-to-vape. Once again, Conley and York are both attorneys, so they have been intricately crucial factors to assisting vaping business owners with understanding their options since the harsh FDA regulations have been released.

Additionally, Corey Luckner, who is the owner of Aspen Valley Vapes, an online Vape-Shop, is a great reference to follow on Social Media (https://www.facebook.com/AspenValleyVapes). Also, I strongly suggest taking advantage of the option to sign up for the Aspen Valley Vapes Newsletter on their website. They routinely send out detailed updates not only about their online vape-shop specials, but they also tend to release content in direct correlation to the latest current events throughout the vape industry.

A couple of other great sources to follow are Norm Bour, the founder & owner of VapeMentors (https://www.facebook.com/VapeMentors) who I’ve interviewed in the past and let me tell you, Norm knows business, specifically the vape business. He is highly-respected by many who are at the top tier of the industry and those who represent advocacy organizations since he has spoken in D.C. a number of times, standing up for the vape industry and he has been instrumental in predicting what would happen to the industry before the FDA regulations were even released. The other person, whom I would strongly suggest following is Guy Bentley, a Reporter for The Daily Caller News Organization. Guy is not necessarily a vaping advocate, but he covers the vape industry in much of his published work.

Several months ago, I was lucky enough to interview Guy Bentley and he definitely thinks all of the anti-vaping propaganda is counterproductive for public health and he covers some of the most up-to-date, newsworthy topics which are vape-related. I would suggest searching for Bentley’s published articles for The Daily Caller rather than following him on social media as I don’t believe he updates his social media pages very often, primarily because he is focused on working at creating honest and factual Journalism (http://dailycaller.com/author/guy-bentley/).

Taking all that has been discussed thus far, it is also extremely helpful to join some united vapers that have formed Facebook Groups. There are countless groups vapers have started, whether they are secret groups you must be invited to join, such as “H.E.M.O. (High-End-Mods-Only) ran by Ali Saeed or LXV (League of Extraordinary Vapers) run by Bryson Young or VE (Vape Exclusive) run by Jared Olson. There are still many groups that are already OPEN to join or you can request to join other vaping groups, like the “DVN Family Vape Hangout” with 2K+ members, “Half Vaped” with 3K+ members, “I am a Vaper Project” with 2K+ members.

However, some of the larger, more well-known groups are “We Are CASAA” with 23K+ members and “VapeNation” with 16K+ members. Either way, each group has different standards for accepting requests to join from individual Facebook users. Regardless, you still have a number of options to choose from if you want to join and all the members share some of the finest insider-info the Internet has to offer. Simply search for each group in the search box on Facebook.

In my opinion, if you want to become a tad bit more “hardcore” into discovering new avenues to explore when it come to the best Insider-Info within the Vape community, then I highly recommend that you consider subscribing to the YouTube Channel for “The Vaping Legion.” Simply go to YouTube and type in “The Vaping Legion” then click the red “Subscribe” option. The reason I use the word “hardcore” is because this is another advocacy group who also considers themselves the “Self-policing,” public health and safety group for the vaping industry. Often times, many may consider them to be controversial or dramatic, yet they have exposed a number of irresponsible individuals and businesses within the industry who are guilty of unsanitary manufacturing conditions, child-appealing branding, intellectual property theft, and other types of unethical marketing tactics.

The Vaping Legion is truly attempting to protect and serve the industry as much as possible and they do a great deal of research before making any such claims. Recently, I had the pleasure of interviewing them for an article, in which I quickly learned that they were extremely passionate, determined, and unified. They stay true to their mission statement and follow through – their word is their bond.

Other Important Information on Vaping Advocacy

All in all, you could also follow all the vaping advocacy organizations out there today such as CASAA, SFATA, AVA, R2BSmokeFree, EVCA, AEMSA, etc. There are countless resources out there for anyone looking to get more involved or to simply just gather more detail and data about vaping. Not to mention, it is worth doing a Google search on SEVIA-USA as they are one of the groups that are extremely instrumental in funding the fight against the FDA Regulations. For example, there is a current lawsuit where 11 of the major advocacy groups have come together to sue the FDA for violating a number of Constitutional Rights.

If you do truly have an interest in learning more, follow every vape personality, vaping advocacy group and vape industry news site, which can all be easily found on the Internet, especially social media. Keep on fighting for the facts, don’t give up, stay steady vaped and spread the truth.

Suggestions made by our readers : 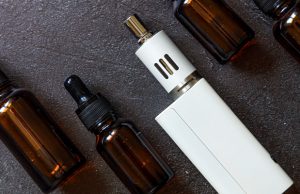 Michael McGrady - October 15, 2021 0
Denver may ban flavored tobacco and vaping products within the city limits. DENVER, Colo. — The largest city in Colorado, Denver, could be one of...

Philip Morris’s CEO About Phasing Out Cigarettes in Japan Within a...

Laguna Beach Considering Banning The Sale of All Tobacco and Vapes