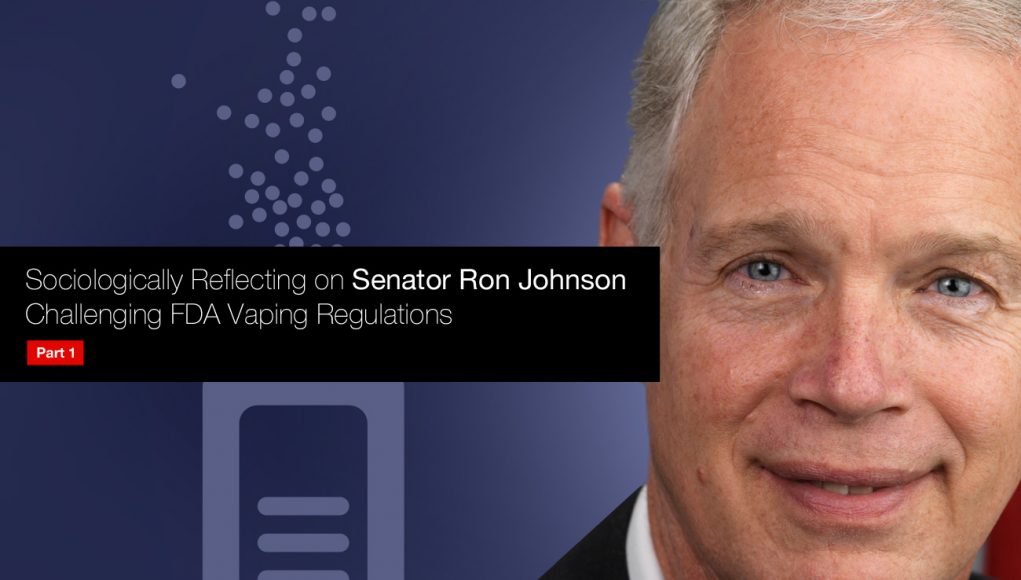 To understand this story in it’s entirety, it is essential for us to first dive deeper into discovering who exactly Ron Johnson is as a politician, who he may have been before his political career and what his political future holds.

We will also dissect what was included in the letters he wrote to the FDA, as his voice seemed instrumental in sparking some type of hopeful attitudes amongst vaping advocates.

However, due to the fact that this is an election year, Senator Johnson seemingly has a lot on his table and a lot to lose in the upcoming election. Not to mention, the many distractions and countless social issues across the nation, for instance the unfortunate distractions consist of scenarios involving Mass Shootings around the U.S., the Clinton Email Scandal, Donald Trump mixing-up public opinion, Recorded Videos of Continual Situations Involving Police Brutality as well as an apparent War against Law Enforcement in retaliation for  the brutality, etc. Senator Johnson’s tone has switched pace, understandably. However, can’t the Senator focus on a number of issues all at once? First and foremost, let’s discuss who Ron Johnson is.

For any of those who are unfamiliar with Ron Johnson, which I would assume might be quite a few who know nothing about this man, unless your hobbies include studying individual backgrounds of specific politicians – a category in which I, myself, clearly now do fall under – he is a Republican Senator in the state of Wisconsin. What is most influential about this politician and what sets him apart from many others, is that Johnson is also the Chairman of the Homeland Security and Governmental Affairs Committee.

On the website for the Homeland Security and Governmental Affairs Committee, it states:

“Ron came to Washington because the federal government is bankrupting America. He thinks it is important for citizen legislators to ally with those who are seriously facing that reality. Ron’s manufacturing background has taught him to attack the root cause of a problem, not mere symptoms. He believes huge deficits, slow economic activity, high unemployment and woefully inadequate job creation are severe symptoms of the problem – but not the root cause. The ever expanding size, scope and cost of government is. Ron serves on the committees on the Budget, Commerce, Science and Transportation, Foreign Relations, Homeland Security and Governmental Affairs and Small Business and Entrepreneurship” (https://www.hsgac.senate.gov/about/majority-bio). Johnson’s homepage site lists the same exact biographical information http://www.ronjohnson.senate.gov/.

Sen. Johnson’s Biography must Include More Info. What is it Not saying?

As a matter of fact, regarding Johnson’s biography, I was going to include what it lists on his official website and the site for the committee in which he chairs, that he started a small business with his wife and brother-in-law until my research turned up this article title: Senate Historian Removes Ron Johnson’s Big Lie from Official Bio.

What Are Some Other Sources Revealing about the Senator from Wisconsin (R)?

The article written by Jud Lounsbury uncovers the fact that Johnson was merely a struggling class ring salesman up until he married into a wealthy family who were the original founders of a successful plastics company called Pacur, which was founded in the 1970’s. Lounsbury writes, “The image of Ron Johnson as a self-made-man who started his plastics company ‘from the ground up’ is a big lie that has plagued Wisconsin politics since 2010. And it had oozed its way into the official Biographical Directory of the United States Congress!”

After reading about these embellished details of Johnson’s past, I began to wonder just what kind of a man Ron Johnson really was and currently is? Writer Jud Lounsbury is a resident of Wisconsin and also wrote in his article, “Unfortunately, Ron Johnson is still spinning the fairy tail that he started the company Pacur. He likes to brag that he’s hit a homerun in life, but to this day has never once publicly acknowledged that his father in law carried him to third base.” Truthful or fictional information aside, politics is a nasty game of lies and deceit – this is a clear case of misrepresenting the truth. What other series of lies and deceit could a politician get away with, without ever being questioned?

There are many other questions surrounding the legitimacy of whose claims are more deceitful since, Jud Lounsbury the writer of this article previously worked as a press secretary for Ron Johnson’s opponent in the upcoming election, Russ Feingold. At this juncture, due to the fact that Jud Lounsbury was able to get this information about Johnson’s biography info in the Biographical Directory of the United States Congress ultimately changed for the record, then I have to believe Jud is not shoveling out a dud to the public. It takes a certain type of person to lie about their background, especially if you’re a public figure who will surely be targeted for inaccuracies in any portion of their former and current life.

In another article it discusses how Johnson is currently the weaker candidate in the election this year. This article was titled “The Key Detail Ron Johnson Hopes Wisconsin Won’t Remember” begins by stating, “Sen. Ron Johnson (R), running for re-election in Wisconsin, is one of Congress’ more vulnerable Republican incumbents, and polls show him trailing the Democrat he defeated in 2010, former Sen. Russ Feingold (D).” (http://www.msnbc.com/rachel-maddow-show/the-key-detail-ron-johnson-hopes-wisconsin-wont-remember).

While our research is accurate and concise, anyone could easily locate these articles simply by typing “Senator Ron Johnson” into the Google search bar. What’s concerning though is the search results are not necessarily going to produce too many positive outcomes for Sen.  Johnson. Most of the information I was able to find on Johnson was without a doubt primarily negative and continually referred to him as “vulnerable” and one who often “lies.” Then again, the Internet is flooded with opinion pieces as opposed to 110% truth. So, you can’t rely on the Internet every waking moment for every serious situation.

Which is a tiny sliver yet a major issue of the large problem our modern society faces – instead of having people attend a library to conduct research, we simply carry devices in our pockets with Internet access that always has the most up-to-date news and other information – yet how much of that info is based on researched facts? This is exactly why all of my college professors only allowed one website to be used as a reference to consult during the process of writing research papers.

However, every word I write is indeed factual and I would summarize any of my articles or other written works as well-researched, entirely reliable validity. Although I do suffer from a minor case of pleonasm, I’m often much too honest – disregard my complacency, I was briefly feeling rather politician-like.

Regardless, now that we have dove deeper into finding out just a tad bit more about who this man is or might be – a man who is representing the Homeland Security and Governmental Affairs Committee as the Chairman, it is now absolutely necessary that we dissect the effect he recently had on the vaping movement and it’s proponents of advocacy.

Next, in this series of sociologically researched articles on Senator Johnson’s relentless, yet often distant demands we are going to jump right into discussing the details of what exactly was written in his letters that were sent to the FDA. We will focus on analyzing how Johnson was voicing his concerns about the authoritarian regulatory overreach by the FDA.

Know everything about Senator Ron Johnson challenging FDA vaping regulations by reading our next chapters :