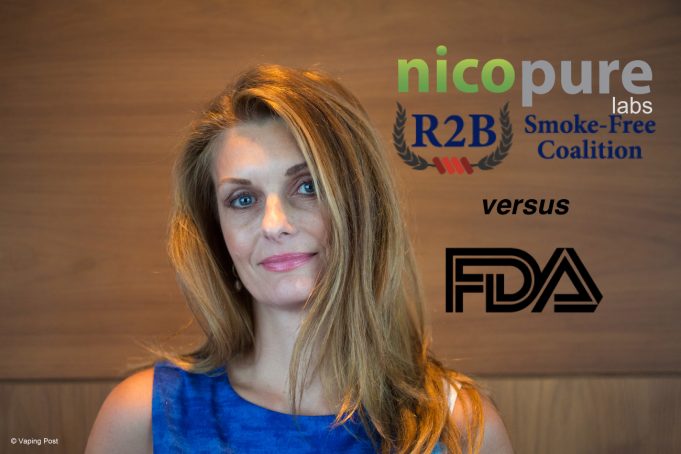 Yesterday was the Motions Hearing at the DC Court.

All went as reasonable as possible. Difficult to predict outcomes, but challenging questions from the judge for all parties, which is good!

Alumnus of Columbia Law School, Patricia’s appointments with major vaping companies (Lorillard, Imperial Tobacco Group, Philip Morris International) brought her specific knowledge in the US regulatory process of tobacco and vaping products. She joined the leading manufacturer of American made e-liquids, Nicopure Labs, as General Counsel and Chief Compliance Officer in August 2015. Since then, Patricia has always been keen for providing insights and for attending vaping shows. She debates in English or French on various subjects like TPD, US FDA deeming regulation.

Patricia, can you remind us what role Nicopure Labs plays in the lawsuit?

P.K.: As you all know, Nicopure Labs out of Florida was the very first e-liquid manufacturer to challenge the Food and Drug Administration (FDA)’s deeming rule on vaping products and other newly regulated tobacco products as soon as the rule was published on May 10, 2016 (the case is Nicopure el al. vs FDA et al. filed in the United States District Court for the District of Columbia in the U.S. Capital).

What is the latest action made by Nicopure and The Right2Be Smoke-Free Coalition in this case?

P.K.: Nicopure Labs moved on an expedited schedule because of the importance and time-sensitivity of this litigation to the entire vaping industry in the U.S.A.. The latest brief in this litigation was filed on August 26, 2016; thus, Nicopure Labs filed its Joint Memorandum in opposition to FDA’s Cross-Motion for Summary Judgment and reply in support of plaintiff’s motion for Summary Judgment.

Can you explain us in what consists this Joint Memorandum?

P.K.: FDA’s Cross-Motion had been filed on August 8, and was in excess of 100 pages, which is much more than what Nicopure et al. were granted by the Court for their final reply brief – only 45 substantive pages. Procedurally, this latest brief had to address one by one FDA’s allegations in FDA’s August 8, 2016 Cross-Motion for Summary Judgment, which the plaintiffs have done, with due care to the page number limit.

No new arguments have been put forward in your reply to the FDA’s Cross-Motion. Does it mean that Nicopure Labs is running out of arguments?

P.K.: No new arguments are appropriate in such replies, and the plaintiffs took great care to rebut every single substantive argument that FDA had made in its Cross-Motion for Summary Judgment.” For the layperson it may be surprising that no new arguments are raised in this brief – new arguments would not be procedurally appropriate at this stage. Besides, all plaintiff’s arguments had to be laid out in the Motion for Summary Judgment, as they indeed were, for the FDA to have an opportunity to address them.

From a technical point of view, everything is very important. However, for non-expert witnesses, what substantial message did you convey to the Court with this reply made on August 29?

P.K.: Nicopure, jointly with the other plaintiff (Right to be Smoke Free Coalition) asserted that FDA lacks authority to regulate products not made or derived from tobacco, that the deeming rule fails APA review, it is invalid because it is premised on an arbitrary and capricious cost-benefit analysis, and it violates in several ways the First Amendment to the U.S. Constitution.

Do we have to expect other submissions from the FDA or from yourselves? What are the forthcoming steps?

P.K.: This is the last brief that Nicopure may file in this litigation. FDA has one more round of answers due by September 8, and then the oral arguments – which are not an actual trial – will take place on October 19. The oral arguments will be an opportunity for the parties to summarize what was said in the briefs, rather than try to raise new arguments, and more importantly, to answer any questions from the judge.

Is there anything more that can be made by individuals or consumers association to support the vaping industry in this case?

P.K.: When outside parties wish to support one or another of the parties in litigation, a procedurally acceptable tool is for such parties seek permission from the court to file an amicus curiae brief which, even when filed, the judge is not obliged to take into consideration in deciding the case. Fifteen prominent anti-tobacco advocates who support e-cigarettes as tobacco harm reduction, led by Clive Bates, filed an amicus curiae brief in support of the plaintiffs, as did SFATA, TechFreedom and the National Center for Public Policy Research, CASAA and Vape-a-Vet. In support of FDA, Campaign for Tobacco Free Kids rallied a few not for profit associations. No more amicus curiae briefs can be filed at this time.

“The judge will likely take several months to decide the case. No more motions are expected during that time. We will keep you posted”

Clic here to get access to the documents related to this case.

Government needs to BACK OFF ! Leave people alone !