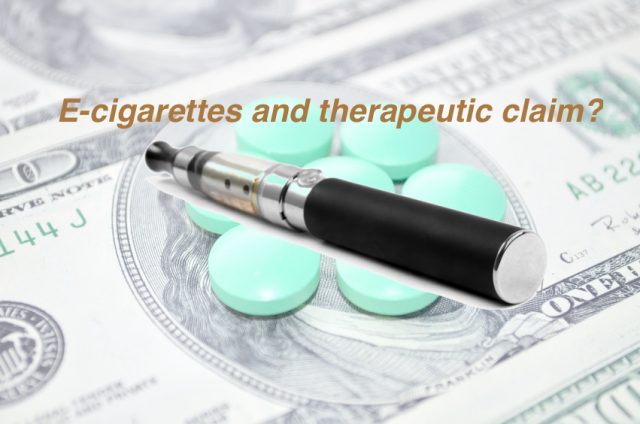 Over 6 months (January – June 2015) advertising by 23 leading e-cigarette brands through social media channels and blogs as well as user-generated content (testimonials) appearing within brand-sponsored Web sites were analyzed by Stanford researchers. They isolated an explicit claim of cessation efficacy with unambiguous statements in favor of smoking cessation success. They also point out implicit claims that use euphemisms such as “It works”.

E-cigarettes are currently regulated in the USA by the FDA as recreational products after the Congress gave the FDA jurisdiction over those products, enacting The Tobacco Control Act on June 22, 2009. For therapeutic purposes, as smoking cessation products for example, e-cigarette should rather be regulated by the FDA through the Center for Drug Evaluation and Research (CDER), a different entity.

As recalled by Patricia Kovacevic, General Counsel and Chief Compliance Officer for Nicopure Labs Nicopure Labs LLC, “FDA tried to regulate these products as drugs in 2009 but that attempt was challenged in court and FDA lost. That case was decided in 2010 (Sottera)“.

Hence, if officially considered as a drug, vaping products could escape from the definition of a tobacco product and be regulated as drugs rather than as a tobacco product. The FDA initiated a rulemaking to provide clarity regarding the interpretation of the drug and device definitions in the FD&C Act with respect to products made or derived from tobacco.

In determining a product’s intended use, the Agency may look to ‘‘any… relevant source’’, including but not limited to the product’s labelling, promotional claims, and advertising. The rulemaking reads “FDA may take into account any claim or statement made by or on behalf of a manufacturer that explicitly or implicitly promotes a product for a particular use“, it also adds “FDA is not bound by the manufacturer or distributor’s subjective claims of intent, but rather can consider objective evidence, which may include a variety of direct and circumstantial evidence“.

multi-million, multi-year (or multi-hundred million and many years) premarket approval application – known as a new drug application or NDA – under the FDA drug approval pathwayPatricia Kovacevic

Hence, marketed or distributed for an intended use that falls within the drug/device definitions, e-cigarettes would be regulated as medical products. Nicopure’s legal expert warns that “if an e-cigarette product today made a specific smoking cessation claim in its packaging or advertising or any other therapeutical claim (such as: vape this particular brand and you will lose weight/cure cancer/quit smoking etc), FDA can and will promptly go after such product for making a drug claim without FDA approval.“

“Any e-cigarette company may of course embark in the multi-million, multi-year (or multi-hundred million and many years) premarket approval application – known as a new drug application or NDA – under the FDA drug approval pathway ( which has nothing to do with the deeming rule) but why would anyone? when many smokers who start to vape, quickly realize that vaping just and about any vape product will help them give up the smoking habit – without any implicit cessation claim“.

This publication should be a warning for manufacturers who advertise their products on the edge between modified risk tobacco and therapeutical products. Examples of such claims, even if sometimes debatable, are documented on the Stanford School of Medicine website. The snowball effect is important in the domain of e-cigarette and many countries where vaping is not welcome are waiting for the smallest impulsion of the USA to toughen their current legislation to the detriment of Public Health.

As recalled by Nicopure’s legal expert, there is no need for a company to take this risk since an increasing number of scientific publications naturally tend to consider the e-cigarette in a smoking cessation context. The last illustrations are the 2016 Cochrane review and the RCP report.

A 2016 Cochrane Review on Ecigs released