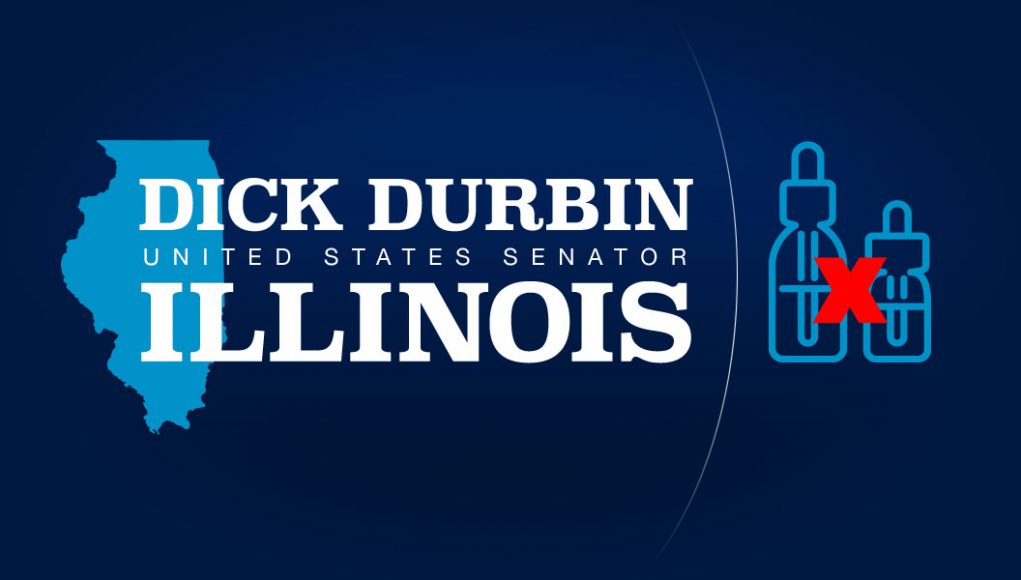 Specifically, listed on Durbin’s website are these factors of how the SAFE Kids Act would:

“Place Strong Restrictions on E-Cigarette Flavorings: The bill would generally restrict flavored e-cigarette products, but allow manufacturers one year to prove to the Food and Drug Administration (FDA) that their e-cigarette flavorings meet three criteria.

(2)   Do not increase youth initiation of nicotine or tobacco products; and

(3)   Do not increase the risk of harm to the person using the flavor.”

Supposedly, Senator Durbin’s Proposal would be that “If companies can prove that their e-cigarette flavors meet these three criteria, they can remain on the market.”

In addition, the SAFE Kids Act would seek to “Ban Cigar Flavorings Altogether.” His website states, “Given that there is no public health benefit to smoking cigars, the bill would ban the use of all flavors in cigars within one year (the 2009 Tobacco Control Act banned the use of flavors in cigarettes, except for menthol).

Durbin has been quoting anecdotes on his website, such as: “While e-cigarette companies claim their products are solely made to help adults quit traditional cigarettes, only 3 percent of adults are using e-cigarettes whereas 12 percent of kids are using them.

Never heard that statistic before, not too sure about it’s reliability or validity. Statistics need to be both valid and reliable to be taken into serious consideration. It’s not a particularly clever form of governance to promote legislation based on untrue anecdotes — it insults the intelligence of constituents and lowers the standards in American Politics. Without using valid and reliable research results, this approach is both irresponsible and dangerous.

In addition, on Durbin’s website, it directly states, “In fact, a recent study out of Dartmouth found that e-cigarette use leads to 81 times more new smokers than quitters.”

Excuse me? So, this is claiming that the most effective form of tobacco harm reduction in existence creates 81 times more new smokers than quitters? Really? Now, this is simply nonsensical and those within the vape community understand that it is purely nonsense and nothing more than fictional remarks.

What about all of the officially sworn testimony collected by the VTA & CASAA in their recent campaign? A collection of vapers telling their life stories about vapor products being the only solutions that allowed them to quit smoking. That is powerful content that will certainly be used to refute any such claims.

The Main Issue with the Politicization of Flavor

However, the issue is that many citizens outside the vape community have no idea what to believe, so they believe in whatever they hear the most. Whatever type of information is most frequently visible to them or information they are able to hear — however this info is presented to them, it will likely become the most erroneous preconceived notion among the general public.

Lastly, the name of this news update or blog post on his website, is literally titled, “Durbin To E-Cigarette Industry: Gummy Bear-Flavored Liquid Nicotine Helps Adults Quit Smoking? Prove It.”

Prove it? Herein lies the biggest issue in flavor bans. This blog title post is in fact highly insulting and borderline harassment. Why are vape industry professionals allowed to be harassed and shamed? It’s getting out of hand and frankly, entirely uncalled for. However, the title is basically attempting to bait vapers and Industry professionals into “proving it.”

Whenever anyone doubts the effectiveness of vapor products, as a vaper, it is very easy to fall victim to being baited into an argument, proving exactly how much safer and healthier vapor products are than traditional cigarettes. Therefore, it is extremely significant to remain mindful that immediately proving just how much safer these products are for consumers is exactly how the opposition wants to the community respond.

Taking this into consideration, remember that this may indeed just be a distraction and a waste of time. This is a political trick that vapers and advocates must look past. As tempting as it is to instantly prove how the obvious safety enhancements vapor products provide are indeed advantageous to public health, it might also be equivalent to falling prey to the trap being set by the anti-vape establishment.

For instance, consider the insight of the highly respected and professional advocate Stefan Didak, from Not Blowing Smoke  — Didak shares some extremely helpful information, he states: “When specifically taking on a flavor ban fight it’s not about the science of vaping, it’s not about it being safer, etc. It’s all about identity politics.”

Furthermore, in one sense the opposition to the vapor industry is indeed attempting to use our own positions and our own main talking points against us, inviting us to prove just how save these products are. However, they know themselves just how much safer vapor products are — which is without a doubt, a major threat to their livelihoods and economic standing. So, while we engage in their game of show and tell, by participating in providing facts in relation to the science and safety of vaping, simultaneously they are swiftly setting up the next obstacle.

As it states on the Not Blowing Smoke website, “Vaping is not a health hazard. Vaping is only a hazard to public health funding.”

This is by far some of the best advice vapers and advocates could hope for. This is politics, not logic. It’s an unfair game, not based on facts, stats or talent. It is determined by money and influence. As you could imagine, this is one area that the vape industry must continue to try harder to gain more of.

All the information about the SAFE Kids Act can be found directly from on the Senator’s .gov website and surprisingly seems highly contradicting with the information it’s listing. There will likely be more material to read that covers this issue, especially any updates regarding flavor bans.