Vaping Post
Home Press Surgeon General doubles down on anti-THR, as assault on US vapers continues 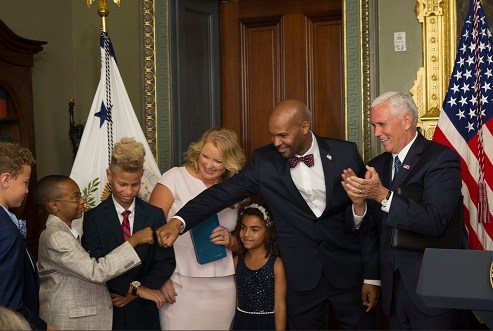 US Surgeon General says teen vaping is an “epidemic”

The United States Surgeon General, Jerome Adams, ratcheted the country’s war against harm reduction up another notch on Tuesday. In an alarmist news conference he claimed the use of reduced-risk products had become an “epidemic” among teens, and worked hard to stoke up fears about the alleged health risks of vaping.

Adams’s diatribe against vaping ranged far and wide, but the central theme was a huge claimed increase in the number of teenagers who vape. According to Adams, e-cigarette use among high school students has almost doubled over the last year, a claim he ascribes to the popularity of devices like JUUL.

Building on the anti-harm reduction rhetoric of his predecessor Vivek Murthy, Adams officially declared youth vaping to be an epidemic. The problem is that this dramatic claim is, yet again, based on flimsy and misinterpreted evidence. The USA continues to define people as current vapers if they’ve used an e-cigarette at least once in the last month. Most “teen vapers” in the USA fall into this category – they’ve had one or two puffs on an e-cig in the last 30 days, but are presented as regular vapers.

Adams also made several other misleading claims; for example he stated that a single JUUL pod contains as much nicotine as a pack of cigarettes. This is true, but as usual Adams didn’t mention that a single JUUL pod also lasts about as long as a pack of cigarettes; users aren’t taking in more nicotine than smokers. It’s disturbing that the people who set the USA’s policies on tobacco harm reduction are still this ignorant – or this dishonest.

Wisconsin city cracks down on vaping

It’s about to get a lot harder to quit smoking in Appleton, Wisconsin, after the city council voted to add e-cigarettes to the city’s existing anti-smoking laws. A new resolution put forward by a city alderwoman was approved by the mayor on Wednesday and passed on to the Board of Health.

The resolution was written by Alderwoman Cathy Spears, a medical technologist at the University of Wisconsin, and it’s simple enough – it just amends the current laws on smoking so that vapour products are also included. Unfortunately, the implications of that are fairly horrific.

Assuming the Board of Health signs off on the proposal, which is very likely, it will become illegal to vape in any indoor public place except a tobacco shop or a designated smoking room in a hotel. Vaping will also be banned in city parts and within 20 feet of the door of any city-owned building.

Appleton’s local politicians – especially the Board of Health – have a poor track record on harm reduction. Earlier this year they fed local media stories claiming that vaping harms brain development – a very dubious hypothesis based on a handful of rodent studies – or irritates lungs. Predictably, the Board of Health welcomed last week’s move.

JAC Vapour, an e-cigarette manufacturer based in Leith, has set out on an ambitious expansion scheme since winning a contract to supply vapour products to Scotland’s prisons. The company has been around since 2010, but hasn’t been a major player globally. That might be changing, since the Scottish parliament brought in a prison smoking ban that takes effect this month. In a rare display of common sense from the ruling SNP, the ban doesn’t include vaping, and JAC Vapour have won the contract to supply prison-safe e-cigarettes to inmates. Now they’ve used the cash windfall to launch in France and Germany, and last week they started selling in the USA. It’s a rare example of government action actually helping harm reduction instead of interfering with it.

The Truth Initiative, a US pressure group funded by tobacco company payments under the Master Settlement Agreement, has criticised Altria’s decision to purchase a 35% stake in e-cig maker JUUL Labs. According to the group, the deal means JUUL has lost all credibility as a harm reduction business because long-dead Altria executives lied about nicotine in the 1960s.