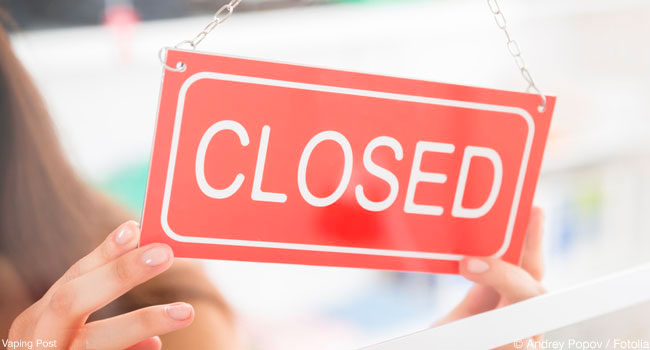 Facebook
Twitter
Pinterest
WhatsApp
When the high complex, costly and compulsory PMTA process began, following a tough period due to COVID-19, Murray decided to let her licence expire.
Skip Murray, a passionate vape advocate and former smoker who managed to quit smoking thanks to e-cigarettes, alongside her son, has been forced to close down her small vape shop, Lakes Vape and Rec Supply in Brainerd, Minnesota.

Filter revealed that Murray has updated a Twitter thread every time a vape shop closed down. Sadly, on December 31st, she added her own. Given the smoking cessation success her son and herself experienced via vaping, Murrey tried to remain optimistic. “Realistically, I knew this was going to happen,” she said as quoted by Filter. “But I kept hoping that something—something—would change. I was holding out hope that the world would come to its senses.”

The downward spiral started when EVALI hit said Murray, when fed by the constant misinformation and propaganda against vaping, her business experienced about a 30% drop in sales. Subsequently, when Minnesota went in lockdown, vape shops were not deemed essential, so Lakes Vape and Rec Supply remained closed throughout. When the high complex, costly and compulsory PMTA process began, Murray decided to let her licence expire. “It was really hard to close,” she said. And it looks like this process is imactuing even larger businesses.

The US industry has been hit hard

In fact, Avail Vapor a massive vape company founded in the 2013, has been dismantling its business to avoid disaster. AVAIL Vapor LLC’s specialized brick-and-mortar shops and website, were started by James Xu  in 2013 and grew to over 100 retail stores in 12 states, 400 employees and a manufacturing facility in Chesterfield County. However, given the current hostile regulatory environment, Xu saw that the brand was entering 2022 with essentially “zero” business, hence decided to dismantle everything. “Right now, we are unwinding everything,” said Xu as quoted by The News and Advance.

The founder explained that like other vape businesses, the brand is finding it impossible to meet the FDA’s unrealistic regulatory requirements. “Under this environment, we cannot operate a legitimate business,” Xu said. “Our biggest problem was we tried to believe in the FDA – that one day it would regulate this market with common sense.”

To the horror of many, while the FDA has rejected PMTAs for small to medium-sized businesses by the thousands, new documents reveal that PMTA reviewers have created a method to get through a backlog of millions of PMTAs, enabling them to quickly dismiss many of them without reviewing their submitted documents.

The uncovered memos reveal how the FDA planned to deal and quickly dismiss the heavy volume of applications. “Office of Science has been tasked with developing a new plan to effectively manage the remaining non-tobacco flavored ENDS PMTAs not in Phase III, substantive scientific review,” reads a memorandum signed on July 9 by Matthew Holman, the director of CTP’s Office of Science.