Following the article on the key characteristics of 18650 and other batteries, below you will find their less well-known characteristics, which are also important if you want to optimise your choice. The internal resistance, voltage sag, rated voltage, chemistry, and discharge rate will no longer hold any secrets for you.

This article is not essential when choosing your batteries, that was the purpose of our previous article. This article is aimed at geeks who want to find out about certain mechanisms, those looking to optimise their vaping with mech mods, and the curious among you who aren’t averse to some maths. It is fortunately possible to have an extremely pleasant vaping experience without having any idea what is coming next! However, you will come across some terminology that crops up in groups or forums, which is often muddled up or interpreted incorrectly. Reading this article won’t give you any electrochemical engineering qualifications, but it will clear up a few myths, allowing you to really optimise the choice and use of your batteries. 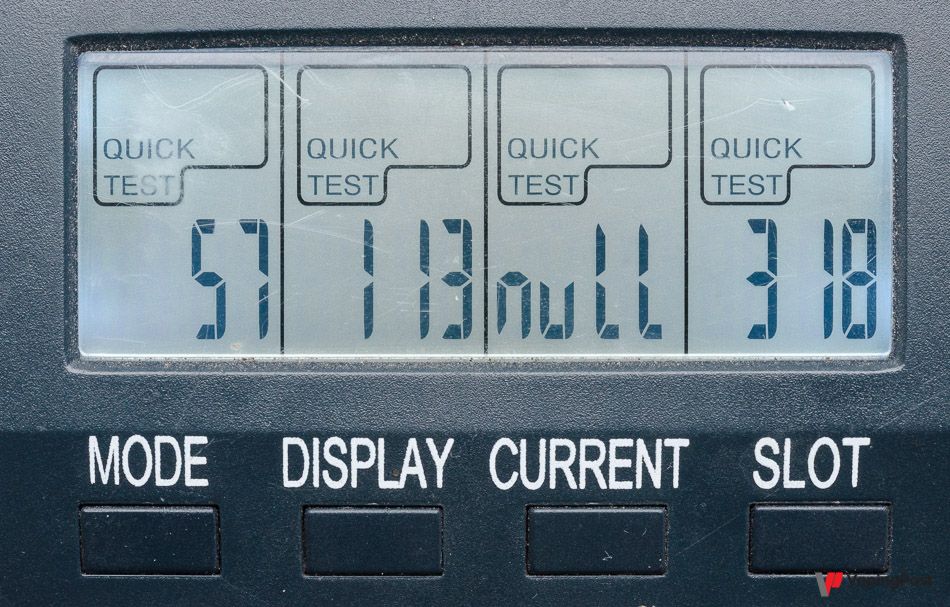 The internal resistance of a battery is… precisely that. It seems counterintuitive, since a battery generates electricity, it appears to be nonsensical to talk about its resistance: if it generates electricity, how can it be resistant to current flow? Looking at it externally, it indeed generates a voltage, but internally, it actually has a resistance. Ions circulate inside and its resistivity is linked with that of the materials used and its internal contacts. Electricity flows in the battery via conductors which, like all metals, have a resistivity. It also has, for the purists, an ionic resistance.

This internal resistance is very low as it is measured in milliohms, or thousandths of ohms, and yet it has a considerable impact on battery operation. It is firstly responsible for the rise in temperature of the battery when it is used. A battery in which the components had a perfect conductivity, with no resistance, would not heat up! And as seen in our article on key battery characteristics, it is precisely the operating temperature that determines the MDC of a battery. The lower the internal resistance, the less it will heat up, and the better it is.

The internal resistance is also responsible for a phenomenon known as “voltage sag”.

The voltage sag is the difference between the no-load voltage and the on-load voltage of a battery. If a battery has a voltage of 4.2 V when idle, this voltage will drop once is it on load (once it is supplying something with power), and this drop in the output voltage is all the more pronounced as the requested current increases. Therefore, the voltage sag is a value expressed in volts, measuring this drop in voltage once the battery is in operation.

The voltage sag calculation is very simple with the following formula, which is none other than Ohm’s Law:

And this formula teaches us a lot!

You can also find out the internal resistance of a battery if you know its voltage sag at a given current: Internal resistance = (voltage sag) / (current). However, you need to be able to measure these two values sufficiently accurately, which can still be tricky.

Finally, the voltage is another reason discrediting the pulse MDC values that rewrappers hold so dear. When you read that a 3000 mAh battery is designed for an MDC of 40 A, remember the voltage sag. With a battery with an internal resistance of 25 milliohms such as the Samsung 25R from the previous example, the voltage sag is 1 V! So, as soon as you start vaping, the voltage of your battery will drop straight to 3.2 V. With mech models, you will not get half the power expected, and an electronic box will display “low battery” immediately, because it won’t be able to ask you if you are joking. Another reason to add to those mentioned in the previous article and exposing just how ridiculous this sales argument is. 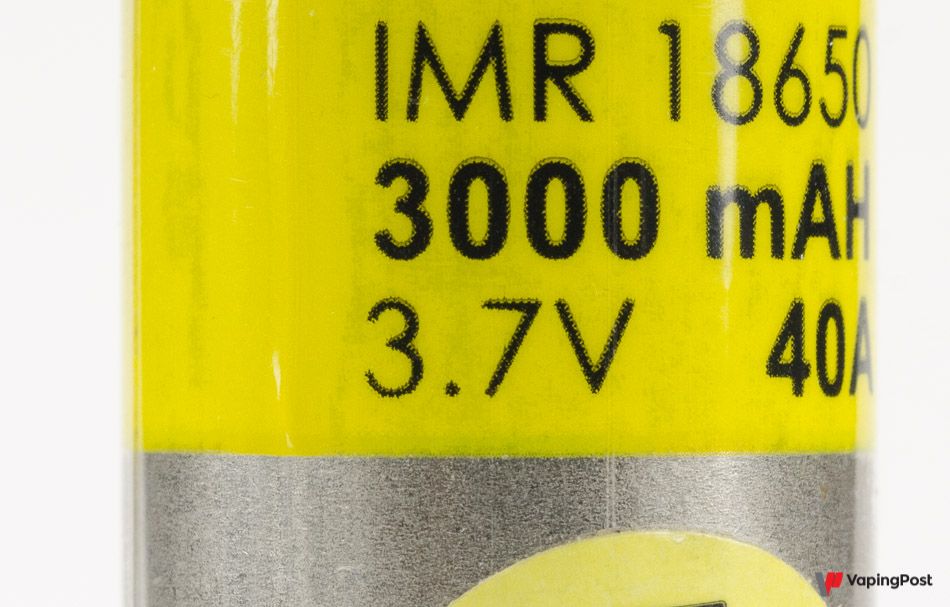 The term may not be familiar to you, and yet you are very likely to know its value: the “3.7 V” clearly marked on batteries used for vaping. A number that seems to have come out of nowhere, that is apparently never used, but can be seen everywhere.

In use, this value is not of major importance to us. If you want to store your battery optimally for a long time when not in use, charge it to its rated voltage for optimum preservation. This value is also the ideal operating voltage of the battery. If you charge your batteries to 3.9 V and charge them again once their voltage has reached 3.5 V, you will extend their service life considerably. Also, if you discharge your battery at a very low current, its discharge curve will form a plateau around this value. For this reason, as I have said, this value is of no real practical use in day-to-day vaping, but you now know all there is to know about this piece of trivia. Now you can show off your new-found knowledge at your next vape club event! 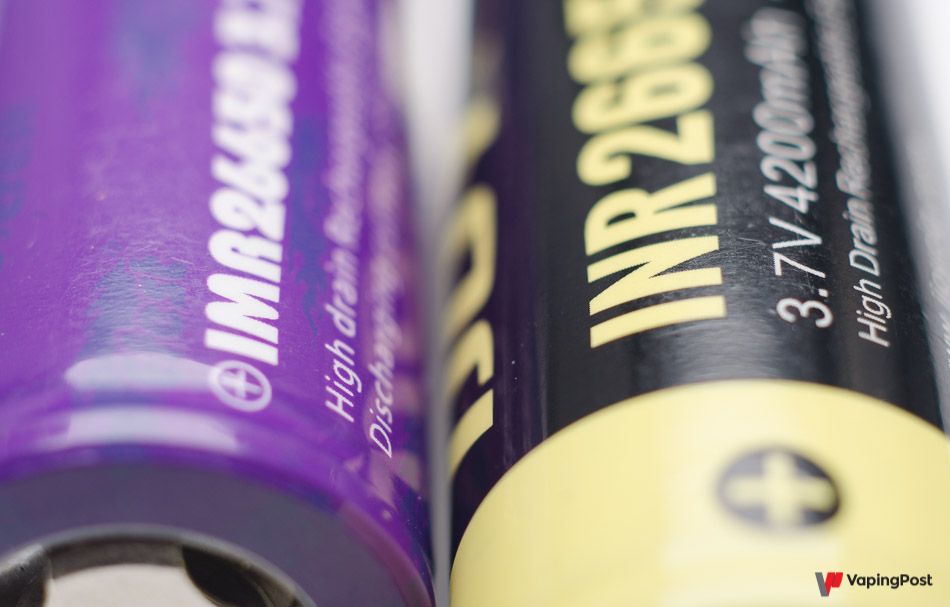 While the topic of rated voltage is somewhat straightforward, that of chemistry is… decidedly less so, with terms that are often used any old way, including by certain brands. Pretty much everywhere, you may read that “IMR” batteries are the safest, and that you should steer clear of “ICR” batteries as they are similar to Li-Po batteries, which are prone to catching fire at the slightest glitch. That is true, and not so true, and we aim to try to clear up all this confusion.

The battery chemistry references that you will come across are IFR, IMR, INR and ICR. “I” means lithium, which may be not be obvious. All our batteries are made with lithium, so far, so good. The “R” at the end means “round”, so refers to a round battery, which has nothing to do with the chemistry. These acronyms are therefore not established chemistry standards, and their format is completely unrelated. Finally, the letters in the middle represent “ferrous phosphate” in the case of “F”, manganese in the case of “M”, nickel in the case of “N”, and cobalt in the case of “C”. Now let’s look at what that means and what the implications are for battery safety.

Schematically, all chemistries are a compromise between safety and performance. As for the capacity and MDC, you will get more of one and less of the other. In other words, the higher the performance of a particular chemistry, the lower its safety, and vice versa. Performance refers in this case to the best MDC for an equal size. And “safe” indicates that it will explode or catch fire at a higher temperature, and less dramatically when such an event occurs. No chemistry is completely “safe” per se, but they can nonetheless be ranked based on this criteria:

LFP (lithium-ion-phosphate or lithium-ferrous-phosphate) batteries are the safest. They are very stable, but their rated voltage is merely 3.2 or 3.3 V, you won’t find any for vaping, which is too bad. These are followed by LMO (lithium-manganese-oxide) batteries, whose performances are not enough for vaping either. Once again, too bad.

The batteries with the lowest level of safety are LCO (lithium-cobalt-oxide) batteries, better known as Li-Po (Lithium-Polymer). These batteries catch fire at the lowest temperature, they are also highly sensitive to impacts and warping, and their reaction is the most dramatic when it occurs, but they also offer the best performances. They must always be used with a safety circuit, and you will not find them in boxes and mods with a built-in battery.

Ranked in between, in the following order, you will find NMC (nickel-manganese-cobalt) and NCA (nickel-cobalt-aluminium) batteries. NMCs are therefore LMOs to which the cobalt in Li-Po batteries has been added for performance. For this reason, they are known as “hybrids”, and are a mix of two chemistries, LMO and LCO. The same principle applies for NCA batteries, in which manganese is replaced by aluminium, but which are quite similar and often considered as “hybrids” for this reason.

Getting back to our IMR, INR and other batteries, IFR batteries are the same as LFPs. So far, so good, but these batteries don’t offer enough performance for vaping, and as such are of no interest. IMRs are characterised by manganese, and thus include LMOs (hence the reputation of IMRs for safety), and also hybrid NMCs. INRs contain nickel, and so include NMC and NCA hybrids. Finally, ICRs contain cobalt, once again including NMC and NCA hybrids, as well as LCOs, the much talked-about LiPo batteries which give ICRs their bad reputation.

That is why you will often read that you should use IMR batteries, particularly in a mech model, and steer clear of ICRs. As often happens, there is some truth in this statement, but it is nonetheless incorrect. IMRs have a good reputation because they include LMOs which are not used in vaping, and ICRs have a bad reputation as they include LiPo batteries which concern only built-in batteries, but never 18650s and other removable batteries.

In addition, many brands mark their batteries as commercial IMRs, simply to offer reassurance, and you will have seen that the information given by IMR, ICR and other batteries is irrelevant in our case. Moreover, in the case of the classic 18650 IMR, you are reminded twice that the battery is round: by the “R” in IMR, and O at the end… just in case you hadn’t noticed that it is not cubic yourself.

In practice, LiPo batteries are used for built-in batteries, and hybrids for removable batteries such as 18650s. Choose your batteries based on their characteristics, you can leave the stories about IMRs and other batteries out of your selection criteria.

The discharge rate, annotated as “C” on batteries and technical data sheets, is a number resulting from the calculation: C = MDC / Capacity. The units must be the same, so the capacity must be in Ah (Amperes per hour) as the MDC is in amperes.

The higher the MDC of a battery, the lower its capacity, so the higher its discharge rate. This value can also be used to compare the performance of two batteries with the same capacity: that with the highest discharge rate will also have the best MDC. That being said, it is obviously quicker to compare MDC values directly.

Which battery brand should you choose?