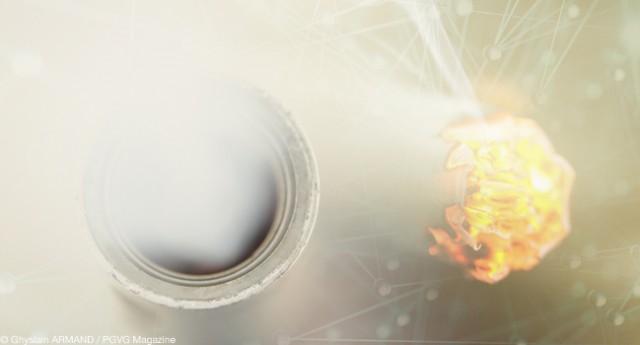 Vaping without nicotine for 5 minutes

At the time of their study, the scientific literature on the effects of vaping without nicotine was scarce. They decided to carry out a study aiming at evaluating the implications of nicotine-free aerosols on the lung function after a short direct exposure. They looked at the lung fonction and the fractions of nitric oxyde (FeNO) and carbon monoxyde (FeCO) exhaled by smokers and non-smokers after vaping on a nicotine-free e-cigarette or a tobacco one.

This study, published in October 2015, was used to compare the effects of the continued use of an e-cigarette without nicotine with those of a traditional tabacco cigarette for 5 minutes within ten adult smokers and ten healthy non-smokers.

In contrast, vaping on a nicotine-free e-cigarette did not have any detectable effect on the exhaled air content with respect to CO or NO, and the only detectable (i.e. statistically significant) effects on pulmonary fonctions were noticed during forced expiration (FEV1 and FEF25), maybe in response to irritant effects of the aerosol (glycol).

The Italian team however refers to a study published in 2012 by a Greek team who assessed no detectable clinical effect althought statistically significant reduction of pulmonary fonctions and an oxydative stress after a short-term vaping on nicotine e-cigarettes (Vardavas [2]). In his blog, Michael Siegel has been very critical towards the latter, since the Greek study did not address the essential comparison: vapers versus smokers.

Even if the protocol shows some limitations, the major being the small sample size (20 subjects), the findings of this study suggest that vaping on nicotine-free e-liquids is a safer habit than vaping on nicotine e-liquids when considering short-term physiological impacts, and an even more safer habit compared to smoking if one considers the wide spectrum of clinical impacts.

Ferrari and colleagues however remind readers that the long-term effects of using nicotine-free or nicotine e-cigarettes remain unknown and that further study is required in this domain.