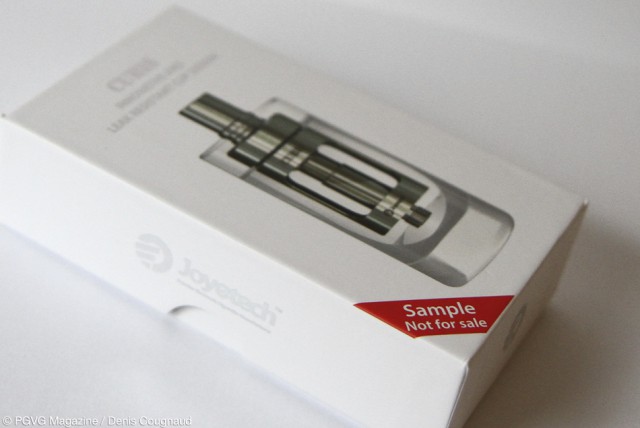 An innovative Clearomizer, leak-free and easy to fill

On year ago, I was trying the Delta II by Joyetech, that left me doubtful because of the very high price of its huge coils.

Here, I am testing the Cubis from the same brand, that comes back in power with its last, convincing, releases.

During the previous tests, and especially during that of the eGo One by Joyetech, with a remarkable power and of a perfect usability, I was noticing that the brand was missing a Clearomizer for more experienced vapers, or those aiming at trying a new type of vape in a tight budget. The gap is definitely filled with the Cubis.

With this new Clearomizer, Joyetech innovates and makes the filling of the tank very easy – until now, it was a weakness for almost all the atomizers of the brand. The new generation of coils, that are more demanding than those of our old Stardust Visions, make the filling more frequent and whatever may facilitate the operation is appreciated.

The Cubis is innovative in terms of design. Now, forget the leaks and the approximative filling of the tanks. The new coils in stainless steel allow the user switch between the modes of power or of temperature control and Joyetech has included three of them in the package, the first one in 0.5 Ohm, the other one in 1 Ohm and the last one, a Clapton-type, of 1.5 Ohm. What is perfectible, here, is the capacity of the tank that could be increased.

The Cubis that I could test on the long-term, logically fits to the Cuboid or the VTC Mini but also to any other classic Mod in 22 mm.

At first sight, nothing special: a tank, a central chimney, a base and a top cap. The system tends to be universal but the innovation is inside the tube. The coil is not on the base but inside the central tube of the chimney that is also combined to the top cap. The top cap also hides an airflow under the top ring that must be removed to open the tank.

With such a system, you won’t keep the setting of the airflow from one re-fill to another because you have to unscrew it each time you remove the chimney. Nevertheless, it is not a problem because its course is short and moving it is smooth and easy.

Such a solution is innovative because there is no screw, no airflow at the bottom of the Clearomizer and, in consequence, no chance to see any leakage after a bad manipulation of the set. The battery is perfectly protected and the tank can be filled very easily, like filling a glass of liquor.

A false airflow, too dependent on the openings for each type of coil

Joyetech’s coils have long been the brand’s weakness but I recognize that it is an old story with the progress made along with the eGo One. The new coils, labeled BF, are thin and short to fit flush into the tube of the central chimney.

The package offers 3 different types of coils to allow you choosing between a tight or an open vape, depending on what you prefer.

The coil possesses some vents, the size of which depending on the resistance since the lower one requires more airflow to prevent burning and to keep it as cool as possible. Hence, the 0.5 Ohm coil is very aerial while the two others in 1 and 1.5 Ohm are tighter, a little bit too much for my taste.

What about the airflow, then? In fact, the airflow won’t correct the type of vape that is given by the coil itself. But Joyetech has been clever enough to offer you the 3 types in its starter kit, so that you can choose and adapt it to your style. Which is fair from the brand.

For the rest, and more precisely for the finis, it is pure Joyetech with always a perfect manufacturing quality. Nothing to say because it is also remarkable if one considers the value for the money.

The assembly of the 7 parts is easy. You just have to pay attention to the O-ring between the coil and the chimney that often slips away.

Be also very careful with the thread of the chimney because I noticed that it is very tiny and may be damaged very easily.

You will also notice that the drip-tip is located on the same plate that also makes up the chimney, where the coil/airflow is screwed. Remember to unscrew this part to clean it from time to time because it gets dirty after a few re-fills.

The tank fills up like a glass of water. Leaving the tank in place on its box when re-filling is very easy and you don’t have to worry about the chimney.

In turn, when unscrewing the top, you will notice that the coil often keeps some drops of e-liquid and you will probably be tempted top leave it, as I did, on the drip-tip to avoid any drops on your desktop. Then, you will also notice that some liquid runs along the chimney to the thread and, when screwing, it will become greasy and dirty with time.

Nothing is perfect. I recommend leaving the top cap in place and allowing some space between the top cap and the tank to re-fill with the vial so that you don’t have to remove it completely.

The Cubis will adapt to very different vaping styles, from a very tight vape with the Clapton coil of 1.5 Ohm and a very low power, to a more aerial vape using the temperature control mode and the coil of 0.5 Ohm.

Of course, it requires that your setup allows such modes and especially to calibrate the stainless steel coils that do have a heating coefficient slightly different. Such coefficients are often built in the pre-settings of the most recent boxes, like the last Pipeline Pro Nine or Eight, the VTC Mini and the Cuboid.

As I already mentioned, the type of airflow is very variable from one coil to another and I did prefer the stainless steel 0.5 Ohm. But there is some kind of agglutination at the beginning and it persists over 2 or 3 puffs before disappearing. It happens each time you re-fill. It is not a problem but it deserves to be mentioned as an issue to be fixed in the future.

This issue is more pronounced with the 0.5 Ohm than with the others. My solution was to blow some air through the drip-tip in order to push away the excess by the airflow and to use a tissue to prevent spitting out drops of greasy liquid.

The Cubis atomizer in images