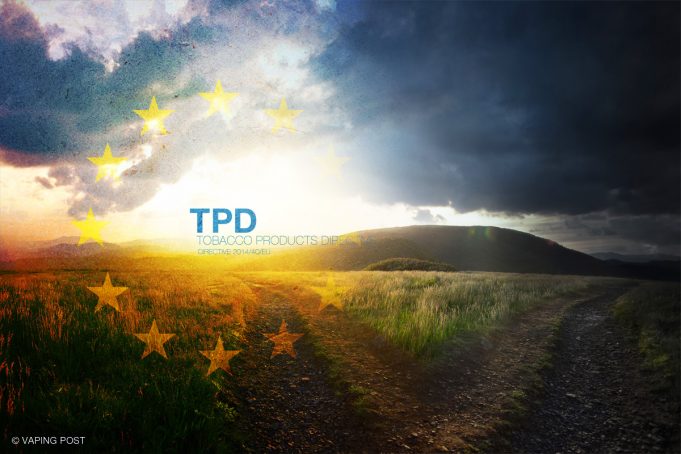 Vaping in Europe stands at the edge of an undiscovered country this week, with the EU’s revised Tobacco Products Directive coming into force today.

While restrictions on liquid strengths and tank sizes won’t take full effect for another six months – a year in the case of the UK – a raft of other regulations apply right away. For example, it’s now illegal for online vendors to make cross-border sales.

Reaction to the TPD has been mixed. Anti-smoking group ASH, in a controversial press release on Monday morning, claimed that “most vapers will be unaffected” by the new restrictions. Their opinion is that around 91% of e-cigarette users already vape liquids below the new 20mg/ml limit and the rest can reduce strength with little difficulty.

The New Nicotine Alliance have challenged this, pointing out that those who use higher strengths are typically former heavy smokers who have recently switched; a lower limit is likely to make vaping less satisfactory, and so less attractive, to the very people who’re most at risk of relapse to smoking.

Meanwhile Tory peer Lord Callanan, who as an MEP led opposition to the TPD in the European Parliament, has introduced a bill in the House of Lords aimed at exempting the UK from the law. Callanan argues that the TPD was written using outdated evidence, and the negative impact it would have wasn’t properly understood. For the TPD to become British law it must be enacted by a statutory instrument.

If the Lords vote to support Callanan’s bill this instrument will be rejected – and because Callanan has used what’s known as a Fatal Motion, it can’t be sent back to the House of Commons for a second attempt. Technically the EU could then punish Britain for failing to comply, but with the Lords vote due less than two weeks before the Brexit referendum they’re unlikely to want to stir up even more resentment. The Food and Drug Administration revealed its proposed rules on electronic cigarettes last week, sparking a storm of opposition from both industry and consumer spokespeople. The FDA have made it clear that they are unlikely to approve any applications for second or third generation vaporisers, so unless Congress changes the law US vapers will be forced onto either cigalikes or the black market two years from now.

So far efforts have focused on changing the grandfather date. As it stands, only products similar to those available before February 2007 will be exempt from the new approval process, which is estimated to cost up to $1 million per product. A bill introduced by a Republican congressman, HR 2058, aims to move that date forward to the day the FDA rules actually become law. That would still make it almost impossible to innovate, but there would be a wide range of open system products still on the market.

Now the influential chairman of the Senate Homeland Security and Governmental Affairs committee has joined in. Senator Ron Johnson, an Oklahoma Republican, has written to the FDA to urge a rethink. One of the committee’s responsibilities is the effect of regulation on small businesses, and Johnson argues that as the law stands it will wipe out an entire sector with the loss of thousands of jobs. Although vaping in enclosed public places is legal in the UK, many organisations have been imposing restrictions on their own properties. Hotel chains, rail operators and even some bars have said no to electronic cigarettes, and the health service has been a leader of the trend.

Now the Nottinghamshire University Hospital Trust has decided to swim against the tide. They initially banned vaping in their hospitals in 2014, but following last year’s Public Health England review the trust has reconsidered. From now on patients will be able to vape on hospital grounds, although it will still be forbidden indoors. Medical director Dr Stephen Fowlie says the trust “can’t ignore the potential benefits of electronic cigarettes as a nicotine replacement therapy.”

On Wednesday the US Transportation Department announced that it will now be illegal to put electronic cigarettes in checked baggage. This follows on from a temporary ban imposed in November, after two cases where bags caught fire and were later found to contain vaping gear.

Transportation Secretary Anthony Foxx says that because of the unique dangers of fire in flight, “Banning e-cigarettes from checked bags is a prudent and important safety measure.” The new regulation also makes it illegal to charge an e-cigarette in flight.