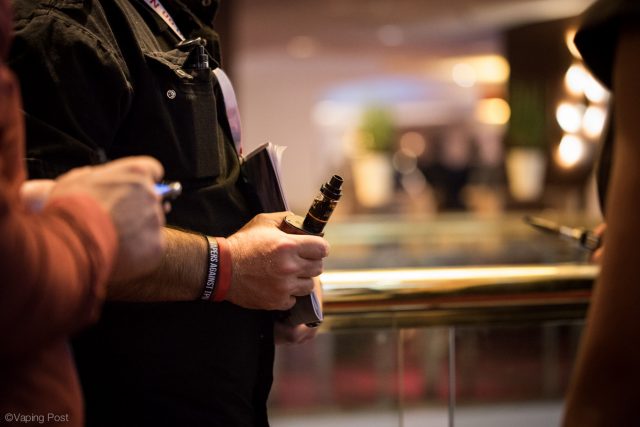 It is demonstrated that smoking plays a central role in the consolidation of ethnic and group identities. Cigarettes are also objects enjoyable to consume and uniquely embedded in everyday situations and relationships. Is the e-cigarette in the wake of tobacco smoking?

The author argue that “e-cigarettes have become a valued form of substitution precisely because they provide occasions for social bonding, gustatory pleasure, and the non-medicalized management of health with endless possibilities for individualized tailoring.” This is what Imogen Bevan, a researcher in medical anthropology from the University of Edinburgh, UK, get interested in when, travelling to France. A deep dive into the everyday’s life of smokers and vapers.

The population targeted by this study is the 18-26 who socialize in bars, restaurants, vape shops… Opposite to traditional surveys where a random population is asked to answer a questionnaire, Imogen interviewed the people she met: “Research advanced by snowball sampling, meeting, and interviewing participants’ acquaintances“.

The participants were questioned on their smoking and vaping history and their relationship with the device on a day-to-day live. Fifteen interviews of 1 or 2 hours were conducted in the first semester of 2014, recorded and re-transcripted by the researcher. The original approach was to tell participants to explain their experience with e-cigarettes and to describe it as if the interviewer was completely novice in the domain. From a methodological approach, it brought interesting results that are delivered by the author in her publication.

At the time the survey was conducted, the Public Health Authorities did not yet admit that healthier alternatives to smoking could be envisioned. The Haute Authorité de la Santé was reluctant to vaping in 2014 but the practice has now become accepted as a healthier alternative by the National Academy of Medicine. In contrast, the enforcement of the EU TPD in May 2016 brought a lot of conflicting discourses to the Media and weakened the harm reduction message.

The fact that harm reduction was also used by Big Tobacco to promote their own e-cigarettes increased the confusion, because of their long history of misconduct with combusted tobacco facts.

The researcher illustrates the constraints some people impose to themselves in order to keep the pleasure of smoking. Examples with stories of smoker Leo (23 y.o.) for whom the carbon monoxide is the main contaminent to get rid of after smoking, Fanny (24 y.o.) who witnesses the gradual deterioration of her skin, the “transformations as damage in progress” and “fights to counter or repair them“.

Discussion comes to how to get a healthier life without loosing the pleasure of smoking?

Based on examples, the author illustrates changes in consumers’ choices with the raise of consciousness about the harm smoking is doing to themselves, and reports people turning to RYO tobacco use to cut down with use of traditional cigarettes, “opting for 100% tobacco without additives, flavor agents or coloring, purchasing organic hemp paper, or even switching to smoking (presumably less addictive) marijuana.”

A change towards greater constraints (time to roll cigarettes, bad taste of tobacco) that the individual feels as expiation.

Hammered by the marketing, the image of “purity” of “return to nature” is hard to erase when the use of an electronic cigarette filled with artificial flavors and excipients is given as safer than smoking ground tobacco leaves or dried flowers. As a non-medical product, e-liquids are sold in vape shops. There, the counselling of the salesperson is important. Especially in the case of nicotine that becomes THE entity that the user can choose to add or not and even to adapt to his vaping habits.

There again, the researcher discusses some points where salespersons in their counselling, sometimes act as pharmacists, calculating the nicotine dose based on the smoking history of their clients (patients?), keeping track of their choices and advising them for adjusting the strength of their e-liquid with time. A role, behind the counter, that makes authority on beginner’s choices.

In the example that illustrates her point, the author shows the burden of responsibility that weighs on retailers’ shoulders when advising customers and the distorted message that they convey compared to what tobacco experts are counselling. While the latter gained knowledge by attending hundreds of hours on university classes (biology, chemistry, biochemistry, physiology, anatomy, statistics) the former “create and test their newfound knowledge on harm reduction on the Internet, in health and science magazines, and empirically by observing and chatting with customers.”

If there is one unavoidable characteristic of e-cigarette, it surely is the flavor, or rather the flavors since more than 7,000 different are available worldwide. “The most passionate users in the field compared their hobby to wine tasting“.

For the author, the socializing aspect that is brought by discussions around gustatory pleasure is probably what makes the e-cigarette so popular and different from the traditional tobacco cigarette, qualified “nerdy“, “has been” by the French pulmonologist, Prof B. Dautzenberg.

The social aspects of smoking and vaping When smokers quit smoking, they need to mourn the loss of its socializing effect, when co-workers, for example, come and meet outside for 5-7 minutes, the time of a cigarette.

But with the e-cigarette, this aspect is kept and evolves to something different. Relationships are no longer made on the pavement, in the backyard of a working place or bar, but on forums where geeks exchange tricks, advices and share information; they now have “something stronger in common than smoking cessation“.

The author writes about vapers that “they come together to celebrate a new practice and novel possibilities“.

To end with this ethnological painting, “the newfound popularity of e-cigarettes resides in the possibilities of refined tasting, new forms of social bonding, and the extensive tinkering these provide.” Vaping is considered as a challenge for several reasons. Firstly, a challenge to cut down with smoking that is in itself and to adopt a healthier habit. Secondly, a challenge to climb the “learning curve” from the status of ‘beginner’, candide user of an e-cigarette, to that of ‘expert’, granting the privilege of advising less experimented ones.

The e-cigarette is then at the interplay of Public Health Authorities who call for caution and try to regulate its use, of the Industry that advertise them as healthier, glamorous, and permanent alternatives to smoking, and of the public who has embraced it with the strong support of internet media.

Science Diane Caruana - January 20, 2021 0
Titled, “Neighbourhood greenspace and smoking prevalence: Results from a nationally representative survey in England,” the study looked into the smoking-related behaviour of over 8,000...