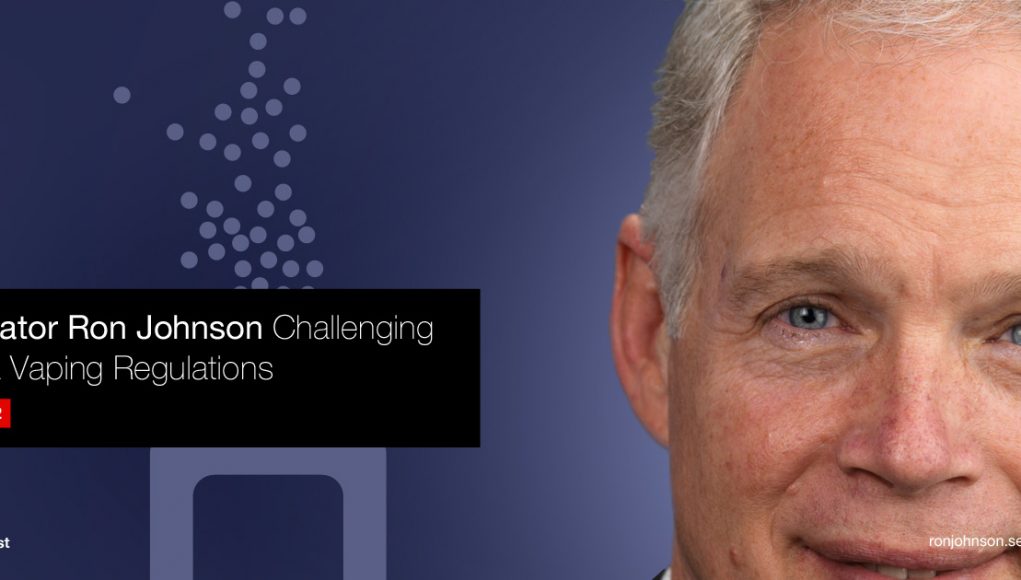 Initially, what Happened when Sen. Johnson sent the 1st letter to the FDA?

More importantly, Senator Ron Johnson of Wisconsin became an instant sensation throughout the vaping industry on May 17, 2016 after writing a letter to the FDA about his concern for the severity of the vaping industry regulations, in which the FDA had published on May 10th, five days after they announced these rules that are particularly reminiscent of the Prohibition Era. This one letter gave the vaping industry something they were lacking at that juncture.

The letter that Chairman Johnson sent to the FDA ultimately revealed to vapers and vape-related businesses that there was a U.S. leader with power and influence standing up for their rights, it gave the vape community a feeling of security knowing that a politician in a position of authority was actually working for the American public, it provided a tad bit more hope for so many vape-related small business owners, the light began to shine a bit brighter somehow allowing for the FDA overreach to not seem so dismal and bleak, and perhaps the letter gave vapers some peace of mind. Either way, it certainly sparked a great deal of chatter throughout the vaping community all over social media, which is largely significant – after all, the vape community is an online community.

The fact of the matter is that even individual vape advocates and vaping advocacy organizations became strongly drawn to the concept of a Senator demanding the same answers that all “advocating-vapers” were also demanding. Therefore, when the vaping-sphere first caught wind of this one letter Senator Ron Johnson sent out to the FDA, questioning their harsh regulating overreach, the vaping advocates, business-owners and consumers all seemed absolutely certain that the FDA would be forced to respond all due to the fact that first-time Senator Ron Johnson demanded an explanation.

What exactly did Chairman Sen. Ron Johnson voice in his 1st letter to the FDA?

Taking this into account, Johnson officially announced in his first letter that “The Senate Committee on Homeland Security and Governmental Affairs is continuing to examine the U.S. Food and Drug Administration’s (FDA) recent regulation that expands its authority over e-cigarettes.”  Furthermore, on May 17, 2016, Chairman Sen. Ron Johnson wrote to request assistance from the FDA in understanding the consequences that the new regulations may have on small businesses and public health. Johnson urged the FDA to explain their overall justification for installing such harsh regulations and if they have fully considered all the potential consequences that these regulations may have on society as a whole.

Additionally, Senator Johnson requested that the FDA provide data on the number of e-cigarette businesses that will be affected by their new rules. Johnson asked the FDA whether it would issue a revised rule if sufficient data were to demonstrate that e-cigarettes are a safer alternative to traditional cigarettes? Therefore, Chairman Sen. Johnson questioned the FDA about some potential unintended consequences of their rules that could result in decreased access to e-cigarettes and increased consumption of traditional cigarettes.

Altogether, this letter was certainly a logical attempt at inquiring about largely significant information. Subsequently, these reasonable questions all properly organized in a professionally written letter-form was a fair chance to allow the FDA to explain itself to the Homeland Security and Governmental Affairs Committee in a rational manner – in reality, a rational explanation from the FDA may be nearly impossible to ever acquire, due in large part to the idea that, in hindsight, there is no rationality surrounding their decisions.

In any event, what was most important, was that this letter was a huge bright shining beam of positive light, reflecting hope for vapers across the U.S. At first, vaping business owners and vapers nationwide saw this letter as a symbol of what the United States was truly supposed to represent. When vaping advocates learned of Senator Johnson’s efforts to gather all the facts and quite frankly, call the FDA out on their nonsensical evaluation of the vape industry, there was a sliver of excitement spreading throughout the vaping movement.

The Effect of the 1st Letter

In all honesty, there were many reasons for this creating some hopeful attitudes. Personally, I believe it was because of one particular portion of what Senator Johnson wrote in this first letter, which definitely had provided some real insight for the vaping community when he stated:

“The Committee on Homeland Security and Governmental Affairs is authorized by Rule XXV of the Standing Rules of the Senate to investigate “the efficiency and economy of operations of all branches of the Government.”  Additionally, S. Res. 73 (114th Congress) authorize the Committee to examine “the efficiency and economy of all branches and functions of Government with particular references to the operations and management of Federal regulatory policies and programs.”

This particular portion of the letter certainly provided evidence for the validity behind the letter he wrote. Making it seem as if it were the duty of the FDA to respond to this request by Johnson. Unfortunately, in reality, that’s just bureaucratic jargon he recited because the FDA answers to no one but the President.

In fact, that first letter was a very prolific event, because it allowed the vaping community to not feel so powerless, helpless and voiceless. Finally, the vaping industry and community had actually witnessed someone with a substantial amount of power and influence asking the same questions that they were also asking. It was such a powerful statement on behalf of Chairman Johnson and the Committee that the vaping community felt as if their government was not entirely abandoning them. At that point in time, vapers and small business owners within the vape-realm felt collectively abandoned and attacked by their own government.

It is safe to say that this one action was indeed a silver-lining for the vaping industry across the U.S., it truly reached the heart of the vape community. The Smoke-Free Alternatives Trade Association (SFATA) shared a brief recorded interview between Senator Johnson and SFATA President Cynthia Cabrera, broadcasting the interview she had with Senator Johnson across the Internet, asking him why he felt the need to write a letter to the FDA as well as what he thinks vapers or vape-related business owners should do?

In fact, I remember when I listened to that interview quite vividly. That day was vivid because the interview was a long way away from anything vivid. Most of the Senator’s answers were far from helpful. He basically just told vapers to advocate and create awareness. Yet, how do you make millions of Americans among the general public care about the vaping regulations when mass shootings, police brutality, mobilized demonstrations in the streets and political unrest fueled by a dramatized emptiness are what currently continue to spread across the nation? The answer is simple: “It ain’t easy!” Yet, if advocating for vaping were easy, it wouldn’t be worth it.

To see the letter in full, it is readable here: https://www.hsgac.senate.gov/media/majority-media/johnson-seeks-answers-from-fda-on-burdensome-e-cigarette-regulations

In the third installment in this series of research articles covering Senator Ron Johnson and the actions he’s taken, demanding he be given further details about the FDA Regulations, specifically dissecting the second letter he sent to the Food & Drug Administration.

Know everything about Senator Ron Johnson challenging FDA vaping regulations by reading our next chapters :