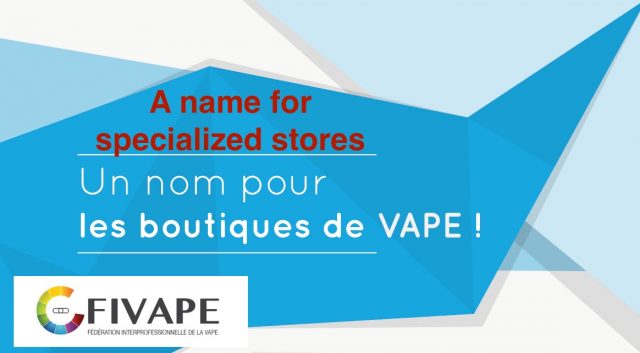 A name and a logo “The carrot” is the name of the red logo that are sporting all tobacconists in France. It has become a legal obligation since 1906 for tobacconists to show this logo on the facade of their store as an indication that they sell tobacco products. The red rapidly prevailed as well as an obligation to be illuminated. It may just be an anecdote, but this form was believed to contribute to a better preservation of tobacco leaves at a time when tobacco was sold as dry leaves. Furthermore, to be able to smoke this tobacco, the customer was obliged to mince the leaves, like carrots.

With the “Blue V” initiative, the federation of vaping professionals calls designers to work on a graphic logo design that would be the visual reference, the “carrot”, of French vape shops.

“The Blue V initiative is a way for specialized stores to display their standards of quality, security and counsel to customers”.

Another project supported by the federation aims at finding an original common name to those specialized stores like the term “vapoteries” used by the francophone Canadians in Québec.

The FIVAPE also announced they would make “militant operations“: FIVAPE’s adherents will distribute flyers to customers and will stress the importance of an identity when distributing vaping products in France.

In a press release, the federation declares that “more than 2,000 specialized stores and internet stores are actually keeping alive this sector in the country while 1 million people have stopped smoking with the e-cigarette“. For the professional sector, such initiatives “strengthen their tights with customers for reducing the harm of smoking in France.”