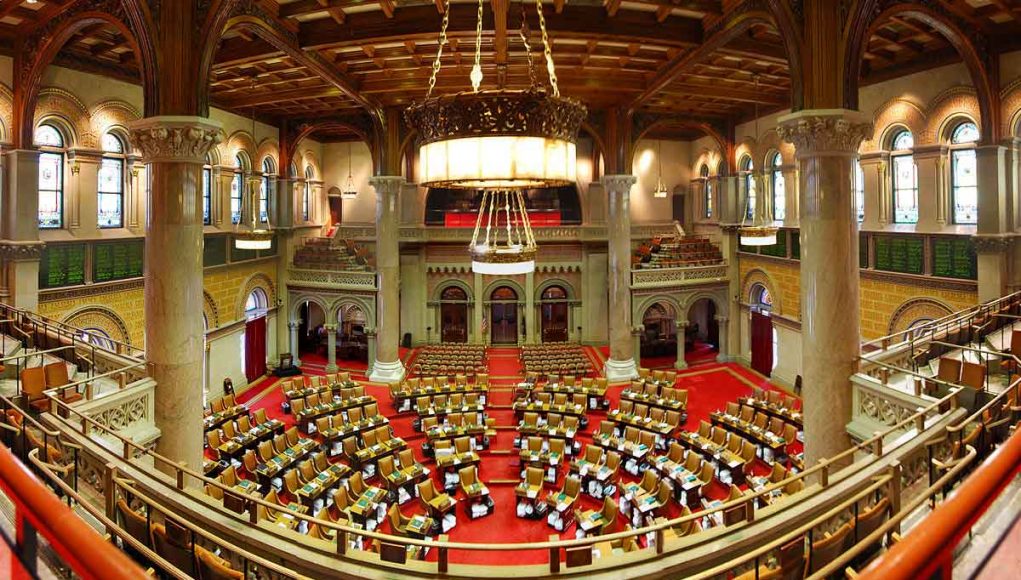 This Vape Industry Professional of NY kindly, openly and directly provided Vaping Post with this statement:

“After watching Linda Rosenthal get her ass kicked at the May 17th hearing, it lessens the blow. However, the Assembly just passed a bill, lumping vaping into the clean indoor air act. But, with a provision to allow business who derive 25% or more of their income from vaping to still vape indoors. So, vape shops are still protected.”

Although, The bill passed, these comments were slightly comical, especially if you watch the NY State Assembly Hearing – due to the fact that Republicans bombarded the Sponsor of the proposed bill with factual scientific data. The Sponsor was a Democrat, which was no surprise. Regardless, she failed to make a compelling argument. All her statistics about Vaping were “broken-record” assumptions and fairytale claims.

Basically, to reiterate what this particular NY Industry Professional was saying is that the legislative bill proposed by Democrat Linda Rosenthal was passed. It consisted of attaching the use of electronic cigarettes to the Clean Indoor Air Act, which means, if this legislative bill now can pass the NY State Senate, it could soon be illegal to use a vapor device in public areas indoors in the state of NY.

Furthermore, this bill has passed the NY House, but must also be passed by the NY State Senate and then signed into law by the Governor in order for ir to be official. Historically, we. Have seen most of the anti-vape legislation always die in the Senate. So, is it likely this will become law? We’ll see, I’m certain vapers would all prefer less restriction. If it follows the NY State Senate’s track record – then the bill will be killed, never to reach Governor Cuomo’s desk.

However, a silver lining remains no matter what the outcome. The small businesses who operate the vape shops will still be allowed to provide their customers with the ability to vaporize in their establishments sense they fit the profile of earning 25% or more in revenue from selling Vapor Products. Of course another state legislature takes it upon themselves to regulate the use of Vapor Products, yet as Vapers we must be grateful for the fact that they still allow vape shops to essentially operate business as usual.

Therefore, at first, I didn’t understand when this passionate NY Industry Professional, had described Linda Rosenthal as getting her ass kicked at the May 17th hearing. Then again, after watching the recording on the state government website, it is easy to see exactly what this Industry Professional is referring to since a number of Republican Assembly Members stepped up to the microphone and recited some of the most impressive and refreshing facts I’ve ever heard a politician speak probably in my entire life.

Not to mention, he was also referring to the redundant legislative actions repeatedly sought after by NY Democrat Linda Rosenthal. Who is this woman? Well, if you would like to find out more, continue to read and you will absolutely understand exactly who this person is.

Linda Rosenthal literally repeats the same anti-vapor rhetoric that we are all still hearing and seeing from the opposition “That vaping renormalizes smoking” in which there is absolutely no evidence for this claim.

Also, Rosenthal repeatedly highlights how “electronic cigarette usage has increased among teens” referring to this issue by stating how it has “skyrocketed” – and nicotine has been considered to be potentially harmful to developing brains.

Interesting claims, since over 50% of Mothers in the U.S provide their children with antidepressant medication that have warnings on the prescription bottles, describing side effects that could be defined as “suicidal thoughts” – basically, hallucinations are heavily and conveniently available for developing brains.

Sadly, I’m pretty sure that is without a doubt, harmful to developing brains as well as developed brains. Why is this not being considered by Democrats? Which Industry most likely supports them and vice versa? Think real hard about this. Hmmm…

So, please allow me to rephrase who Ms. Rosenthal truly is. She is exactly the person you’d expect. Reading all the “knowledge” she had on these products directly off of sheets of paper, as her aides were most likely handing her all those (supposedly) relevant study results. She is a phony crony, an anti-vape establishment puppet, a talking head, a rerun, a cliche who spits out the same old “song & dance” that every anti-vape affiliate adheres to. It’s painful to watch such horrible lies, if she provided more believable information, maybe I’d give her some credit for the creative effort, but there is nothing creative about this person.

Keep in mind, the debate was on whether or not “this bill will, add electronic-cigarettes to the Clean Indoor Public Health Act” – this was the very first statement made by Ms. Rosenthal when challenged by the Republican opposition who requested an explanation.

This very brief and poorly thought-out attempt for a chance to provide a respectable answer additionally seemed to carry with it, some inefficiency along with a counter-challenge thoroughly communicated with an emphasis of a slightly condescending tone, or perhaps it was a tone of unamusing purposeful sarcasm.

Either way, given that Ms. Rosenthal has dedicated her hypothetical “List of Linda’s Political Achievements” to attempt imprinting a misrepresentation of vapor products by reciting fictional statements to her constituents, it’s obvious there is an agenda in place that this one NY State government servant has been ordered to carry out. This can’t all be her own idea – her lack of passion, consistency of telling lies, contradicting fictional claims and lack of confidence tells the real story far too well. It’s very disappointing.

Regardless, there is much more to discuss on this one NY State Assembly hearing, since the Republican opposition figuratively brings the house down with some of the most accurate information ever presented, on any topic, by any political official. It’s quite impressive – and don’t get it twisted, I’m no Republican. Not to mention, I’m certainly not a Democrat either. I’m an American and simply tired of being lied to.

Lastly, there will be a couple follow-up articles on this topic highlighting the significance of the comments made by Republicans defending Vapor Products. It’s far too groundbreaking not to showcase. Promise.

You be the judge. Watch the recording here: http://nystateassembly.granicus.com/MediaPlayer.php?view_id=7&clip_id=4259&meta_id=20064

I live in NY and have called and emailed her office numerous times. Never once recievie a call back. She has tried to ban the sale e-liquid for I think the last 4 years. Says it is more dangerous than cigarettes.