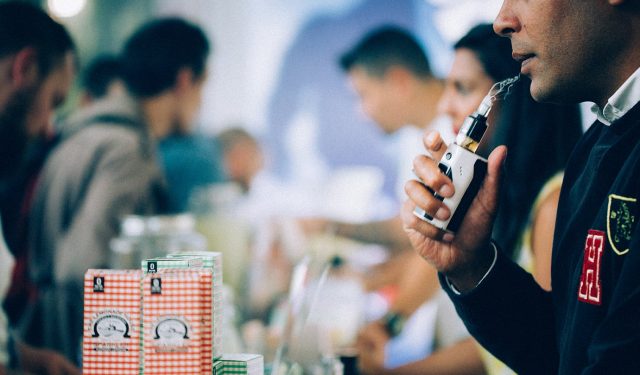 Thanks for tuning in! My name is Michael McGrady, your host, and the public policy columnist for the English edition of VapingPost.com. This is Vaping Weekly Update and here is the news that vapers, shop owners, and activists need to know for this week, published on Wednesday, Dec. 18, 2019.

To begin, let’s return to Capitol Hill in Washington D.C. The U.S. Senate confirmed Stephen Hahn as the next commissioner of the Food and Drug Administration. Hahn replaces interim FDA chief Norman Sharpless and resumes control of the federal government’s national response to the EVALI lung injury epidemic. Hahn enjoyed bipartisan support, with a vote, 72-18.

The state of Massachusetts has also lifted its ban on vapor products under a series of new rules. After the administration of Republican state Gov. Charlie Baker temporarily banned vapor products as a response to the EVALI lung injury epidemic and underaged uptake, the now also accompanies a new law that places a 75% excise tax on nicotine vaping products and requires the state’s health insurers to cover tobacco cessation counseling.

There are several new developments coming from the medical and public health spaces, too. A study published in the American Journal of Preventive Medicine, published by the University of California, San Francisco, found that while e-cigarettes might be safer than cigarettes, there are still risks associated with chronic lung diseases.

Stanton Glantz, the controversial tobacco control activist and academic, led the study, concluding that out of 32,000 people, 30 percent were more likely to develop an injury like asthma or emphysema through vaping. People who vape are 1.3 times likely to face diagnosis than non-vapers.

However, it should be noted that the study that smokers were worse off than people who vaped.

“Although switching from combustible tobacco, including cigarettes, to e-cigarettes theoretically could reduce the risk of developing respiratory disease, current evidence indicates a high prevalence of dual-use, which is associated with increased risk beyond combustible tobacco use. In addition, for most smokers, using an e-cigarette is associated with lower odds of successfully quitting smoking,” reads the study. Glantz told the news media that while his findings show reduced risk, e-cigarettes should not be recommended for smoking cessation.

One of the flaws of this study also highlights a measurement of dated products. The timeframe of the study took place during 2013 and 2016. That means new product innovations were not accounted for.

David Abrams, the world-renowned South African behavioral scientist at NYU’s College of Global Public Health, was apart of this authorship.

“The most harmful products on the nicotine-harm continuum, combustible products, should be much more aggressively and stringently regulated than less harmful noncombusted nicotine products,” Abrams et al said. “Policies that fail to differentiate will fail public health.”

In international news, Thailand was hit with its first case of the EVALI lung injury earlier this month. Public health authorities are responding accordingly, including a medical investigation that emulates the one led by the Centers for Disease Control and Prevention in the U.S.

Also, South Korean military officials also banned the use of vaping products on military installations. Vaping Post reported that the ban comes after the series of vaping-linked lung injuries diagnosed in the United States.

Ontario’s health ministry will also move to ban the promotion and advertisement of vaping products in gas stations, bodegas, and convenience stores. According to data from the Canadian Fuels Association, there are 11,929 retail gasoline stations in Canada or 3.2 per 10,000 people. As you can see, this would have a massive impact.

Let’s take a short break. We will resume with our special report on consumer innovations after these messages.

It’s the season of giving. Since Vaping Weekly is a user-supported show, we invite you all to donate to help us keep this show going. Please visit the link in the description to learn more. Meanwhile, let’s get back to the show. Happy Holidays, and have a happy New Year from our family to yours.

Now back to the news.

That was Wayne Walker, the CEO of Walker Vapor Group and the host of DIY or DIE, the popular YouTube channel and a podcast of a similar name. Walker spoke to me about the innovations of consumers in the verticals of vaping and snus.

As governments around the world continue to regulate e-cigarettes, there seems to be a systemic misunderstanding about vaper culture and how influential consumer input is to develop the technology platforms in mods and other open system vaporizers.

Juul Labs revolutionized the vaping segment in the United States with its release of the simplistic, Juul device. However, this delivery system is designed as a very restrictive and niche-focused product.

DIY, at least, opens up a world of new and bright ideas. Wayne and I discussed more the introduction of consumer innovations for nicotine delivery should be a welcomed development. Many of our listeners likely are involved with craft vapor or DIY products in some capacity — as a consumer or as a manufacturer. So, it’s important to remember that innovation can occur in ways that you wouldn’t even expect.

Wayne also said that he is prepared for the future. DIY should be respected and involved now more than ever.

An MBA candidate at Harvard’s Technology and Operations Management program took this concept to heart. While I am unaware of the author’s name, the perspective focuses on opening up the Juul device as an open-sourced platform. If you consider how systems have developed since the days of internet forums and home-made coils, an open platform for any vaporizer device should at least an interesting concept for manufacturers that can allow consumers to participate in their own DIY to modify their own preferred nicotine delivery system.

This Harvard paper also expands on a topic known as open innovation. Open innovation is a theory of distributed innovation processes based on purposively managed knowledge flows across organizational boundaries, using pecuniary and non-pecuniary mechanisms in line with the organization’s business model. In English, this simply means that products should be open.

When it involves consumer immersion, this theory touches on the consumer involvement at the end of a product’s development cycle. But, the inclusion of consumer input overall allows the product and its manufacturer to develop designs that respond to the needs of users.

For example, an open Juul platform could foster this. However, in the meantime, DIY mixing and home-designed systems, luckily, exist to further revolutionize the product category.

Snus is also another vertical where consumer immersion and open innovation can take place. For example, in an effort to reduce the stinging sensation and reduce the challenge of use for nicotine-sensitive individuals, sting-free portions were developed by Bengt Wiberg of B-O Wiberg Solutions AB in Sweden.

For matters of transparency, Bengt and I are good friends. The patent enforcing the sting-free innovation indicates that innovation is merely a protective fence that reduces the stinging sensation and irritation to the snus users’ gum and oral mucous membranes.

Though Bengt will be included in a future episode of Vaping Weekly, I was majorly interested in another product innovation called Surge. Known as the Surge Can Accessory, this product was developed to protect the freshness of snus portions in specifically designed cans.

The founders state that the can came as a change to the generic plastic products that often come with other brands of snus, nicopods, snuff, and skruff. These cans also address concerns for water-resistance and keeping a user’s portions fresh.

Cherrelle Slater, one of the founders of Surge, spoke with me about the design and its function.

As is demonstrated here, it should be no surprise that snus and vapes share common ground when it comes to consumer immersion and consumer development. Truly, both verticals are driven by consumers, and that is critical for the future development of risk-reduced, tobacco harm reduction products.

And, that’s the news. Stayed tuned for our next Vaping Weekly Update and our upcoming Unfiltered interview with Marewa Glover, the director of the Centre of Research Excellence: Indigenous Sovereignty & Smoking, located in Auckland, New Zealand.

You can listen to Vaping Weekly on Spotify, Apple Podcasts, Google Podcasts, PocketCasts, or where ever you get your podcasts. Just click search, type in “vaping weekly,” and click subscribe.

Vaping Weekly is created and hosted by Michael McGrady