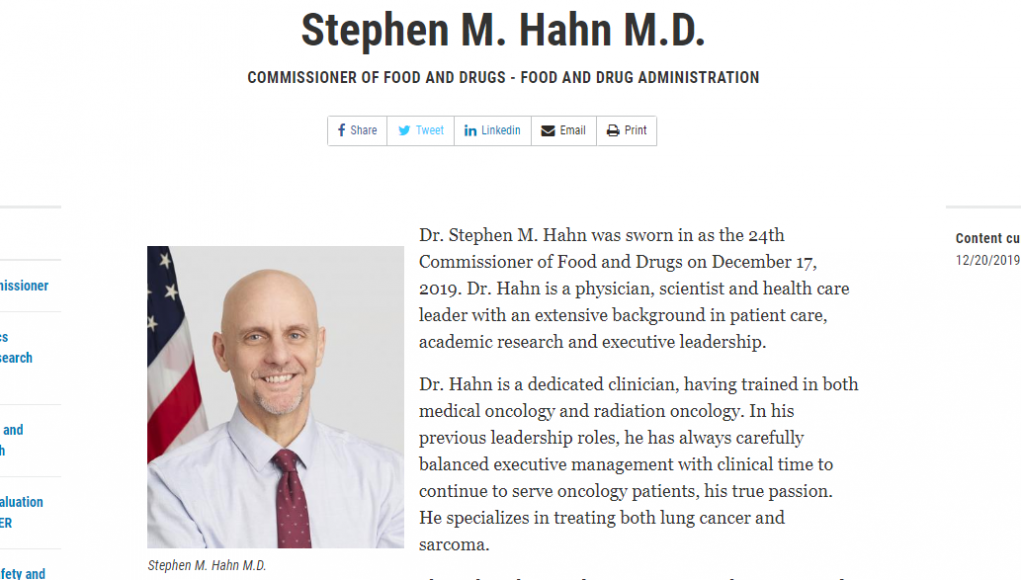 Hahn, a cancer specialist and hospital executive, won the vote for the role of FDA commissioner at 72-18. The move comes at a crucial time with regards to decisions pertaining to vaping regulations, as President Donald Trump and his top health officials are in the process of implementing new measures.

Former FDA Commissioner Dr. Scott Gottlieb had announced his resignation in a letter to the agency’s staff last March. Gottlieb had been instrumental in recognizing the potential of vaping products as smoking cessation tools, and has been criticized by many institutions for delaying the infamous PMTA process. On the other hand he had also been at the forefront of the battle against the alleged rise teen vaping, which numerous public experts call nonsensical.

Following his resignation, Gottlieb was quick to point out that the FDA would continue on the path of combating teen vaping, which he referred to as an “epidemic”. “I’m very confident of that, and I’m very confident that we’re going to continue with this policy over the next month, including the policy that we’ve been formulating,” he said at the time.

“Dr. Hahn said to me he doesn’t want to be known in history as the head of the FDA who saw this epidemic grow dramatically.”Dick Durbin, Illinois Democrat

Interim FDA Chief Ned Sharpless, who stepped in instead of Gottlieb, was known for being supportive of the former commissioner’s efforts. “Scott has done a lot for cancer patients and all Americans. Bold leadership on tobacco control, generic drugs, novel biologics and so much more. I will miss working with you,” tweeted Sharpless when he was appointed, giving an indication that he would continue on Gottlieb’s footsteps.

What do we know about his stance on vaping?

Meanwhile, in his confirmation hearing last month which took place before the flavour ban was announced, Hahn repeatedly sidestepped questions about the direction he intends to take with regards to vaping regulations. He said that he will be following “science and evidence.”

On the other hand, he seems to have won the approval of anti-vaping entities. “Dr. Hahn said to me he doesn’t want to be known in history as the head of the FDA who saw this epidemic grow dramatically,” said Illinois Democrat Dick Durbin.