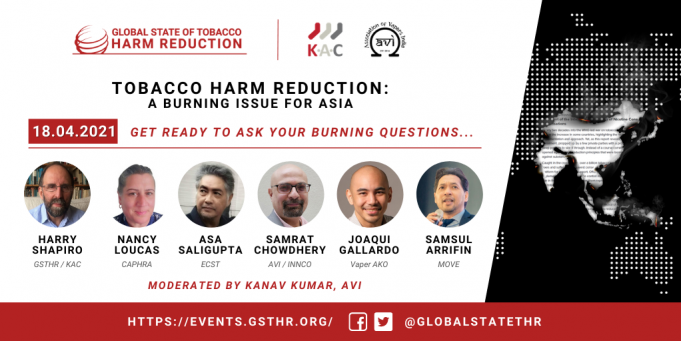 Launched by the Global State of Tobacco Harm Reduction (GSTHR), the Tobacco Harm Reduction: A Burning Issue for Asia report, the paper revealed the terrible toll of the tobacco crisis in Asia. Approximately 6 in 10 of the world’s smokers, and 9 in 10 users of dangerous oral smokeless tobacco (SLT) are believed to live in the region, and the report illustrates evidence of the continued failure of current tobacco control measures and the need for new, pragmatic solutions.

The event which took place yesterday, on Sunday 18th April from 10am UK/14:30 India/16:00 Thailand/17:00 Hong Kong, may be accessed at https://gsthr.events.org. Harry Shapiro, the report author, said everyone has been invited to join the discussion. “Tobacco harm reduction is truly a burning issue for Asia. Many of Asia’s millions of smoking-related deaths are preventable – if only consumers had access to safer nicotine products. Unfortunately, the failing WHO FCTC and a barrage of misinformation and anti-THR propaganda is getting in the way of public health progress in the region. Join me and our panel for the event on Sunday 18 April, and take part in the discussion.”