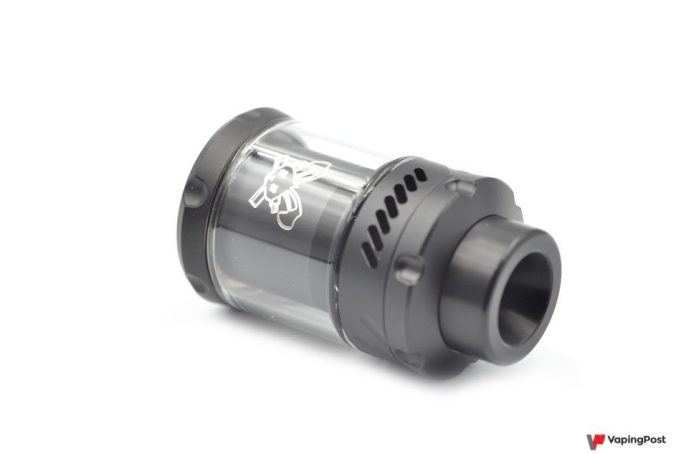 Hellvape is back with the Dead Rabbit V3 RTA.

Like its predecessors, it has a dual-coil deck and a top airflow system, and is almost faultless.

It is designed for direct to lung vaping. Its airflow adjustment system enables you to switch from slightly restricted DL to very airy without losing anything of the flavours. The only downside lies in the size of its deck. 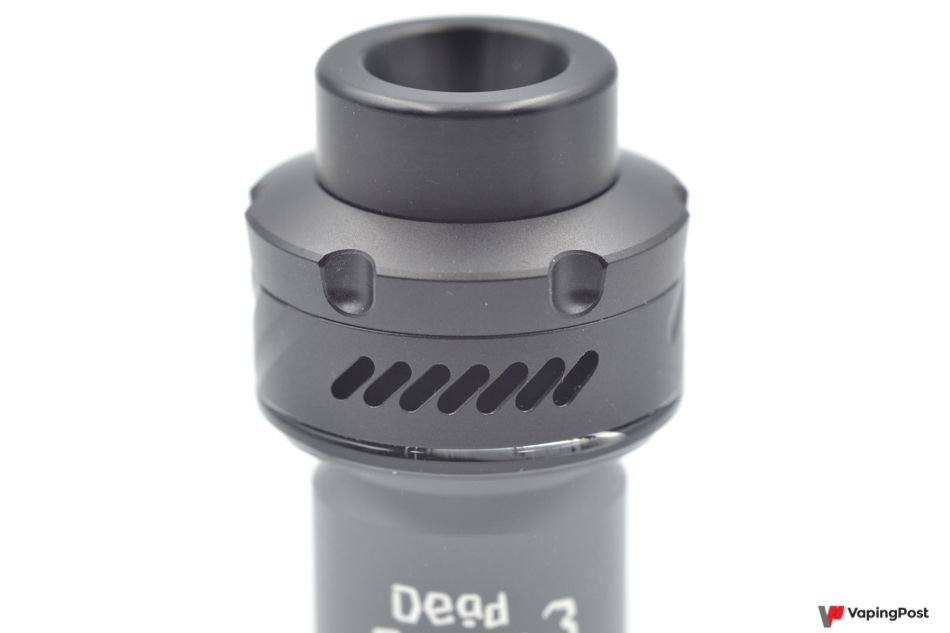 Topped with a 810 format drip tip, the top cap has a quarter-turn release system. Little notches give a perfect grip to open it. The airflow adjustment ring is positioned just below. It has 2×7 grooves measuring 3x1mm. A stop limits its rotation, ranging from completely closed to completely open. It is held firmly in place on the atomizer body by a seal. 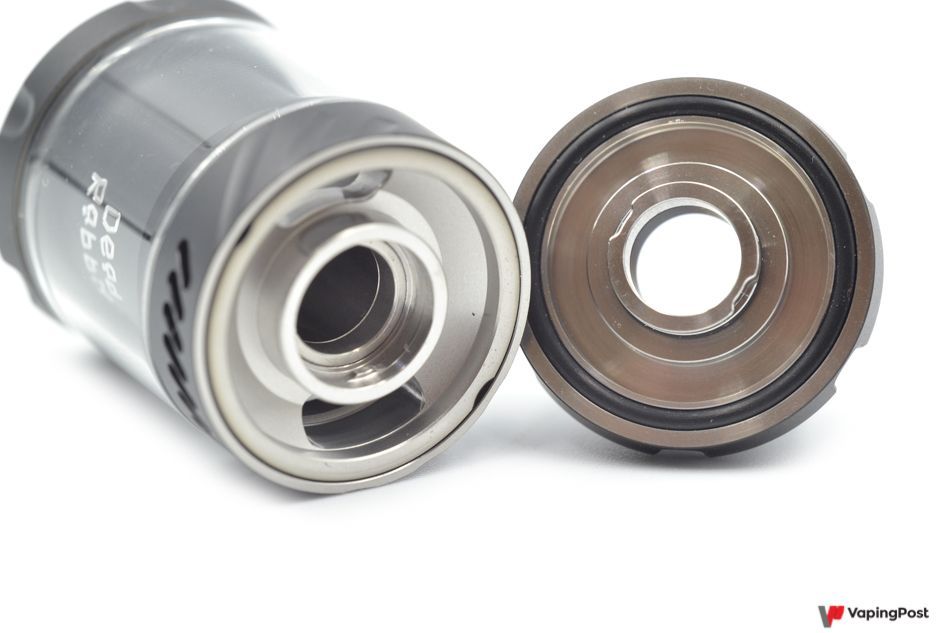 The whole atomizer is made of stainless steel. It is filled by means of two kidney-shaped holes. Their size means most e-liquid bottles on the market can be used except for the largest Twist type. A cone-shaped channel avoids any overflows when filling. A large O-ring ensures there are no leaks between the top cap and the atomizer body. The Dead Rabbit V3 RTA comes fitted with a straight glass tank containing 3.5ml. A bubble glass is provided in the box, allowing you to increase the atomizer volume to 5.5ml. 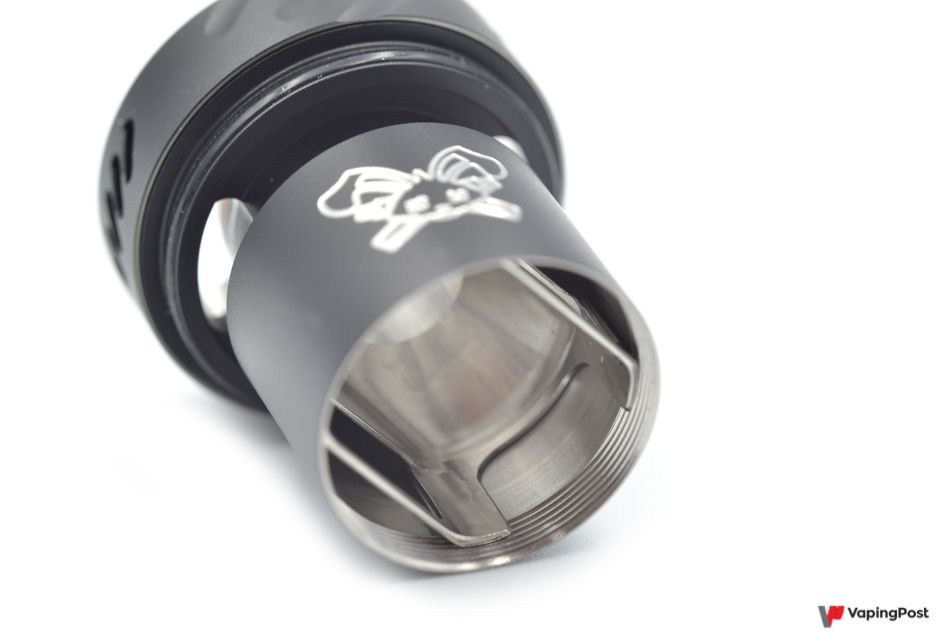 The name of the atomizer and the dead rabbit logo are engraved on the dome. The inside of the atomisation chamber is ultra-reduced, which really concentrates the flavours. The airflow comes from the sides and enters the deck through two wide openings on the bottom of the reducer. 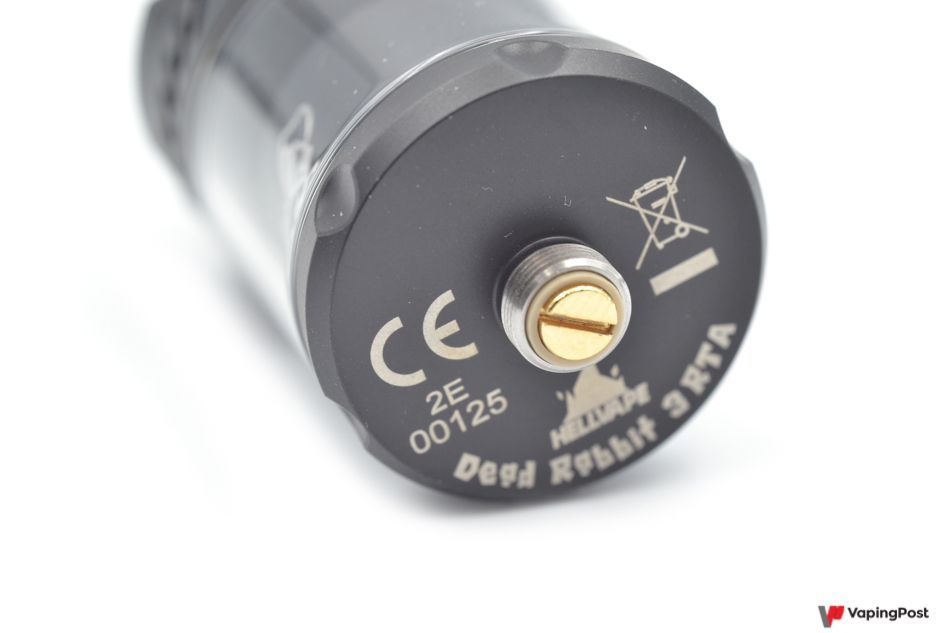 The base of the Dead Rabbit V3 RTA measures 25mm in diameter, but quickly flares out to 27mm. This conical shape may be a problem for the choice of mod if you want things to line up perfectly. The positive pole of the 510 connector is long enough for use on a hybrid mech mod.

A rather small deck 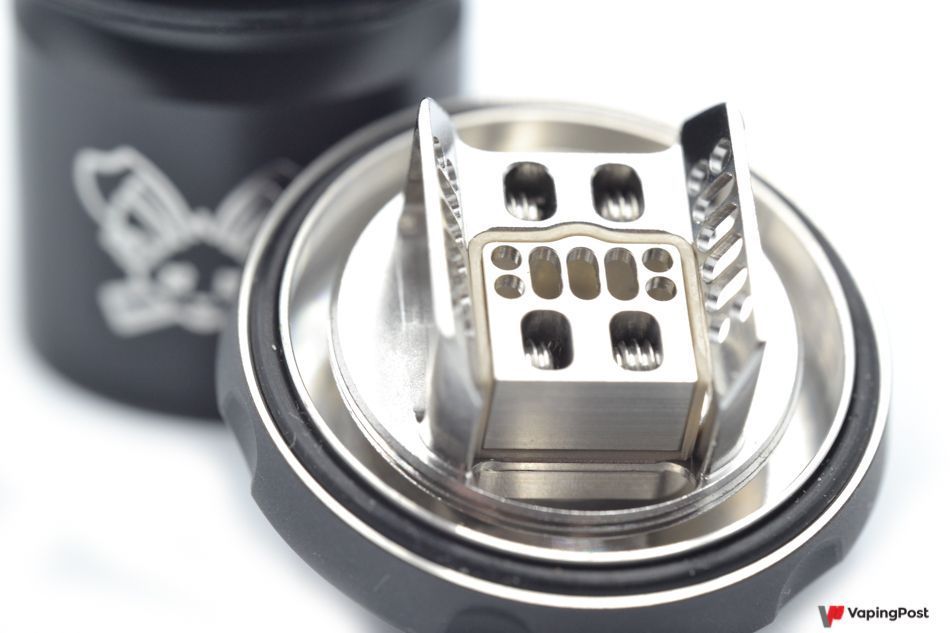 The deck is postless. It has four very good quality flat screws. Four BTR screws are provided in the bag of spare parts, together with a full set of spare seals, a flat spanner and a BTR key.

A wide peek insulator electrically insulates the positive post from the rest of the deck which is shaped out of a single piece. A wide O-ring ensures there are no leaks with the body of the atomizer.

The strength of the Dead Rabbit V3 RTA lies in its airflow redirection system which sends the air to the sides and bottom of the coils. Coupled with a very small atomisation chamber, this atomizer provides a dense, aromatic vape. 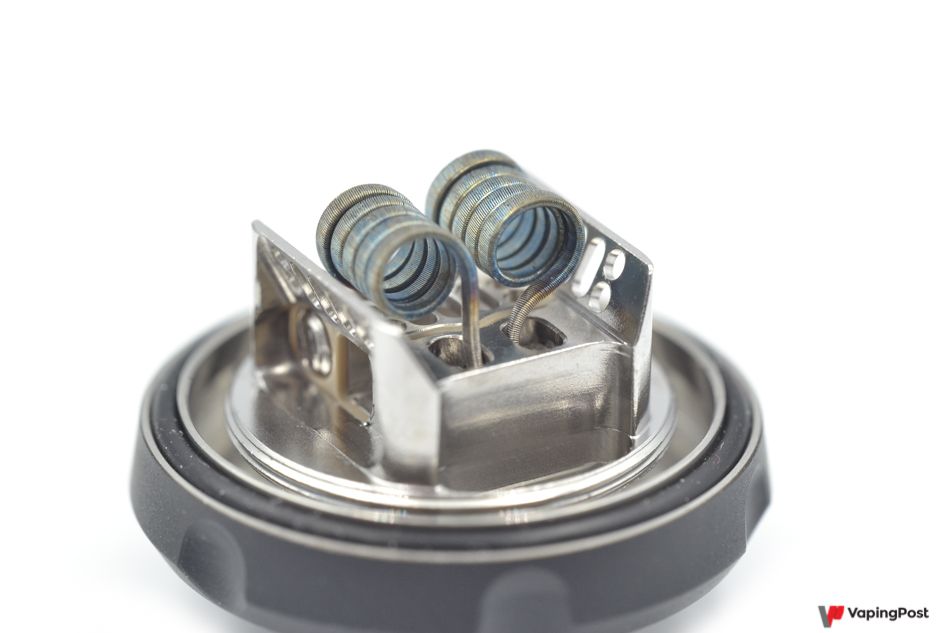 Installing the coils doesn’t pose any particular problem. Simply cut the legs using the guide provided and fit them in the posts. Hellvape recommends a height of 5mm. We think this size is perfect.

The only weak point of this RTA is the small size of its deck. Although installing 3mm coils does not pose any particular problem in itself, this is not the best choice. Given the space between the two airflow grids, the coils are almost touching, which hinders the air circulation in the atomisation chamber. This is reflected in the vape. You occasionally get an impression of poor ventilation.

Inserting the cotton can also be complicated. The size of the wick slots is very narrow. You have to be really careful to fluff out the cotton if you want to avoid interrupting the wicking and getting a dry hit, but at the same time leave sufficient to ensure there is no risk of filling the atomisation chamber by the “communicating vessels” principle.

This operation can be very difficult for rebuildable newbies.

We preferred to use coils 2.5mm in diameter.

In this build configuration, the air circulates better in the chamber. The flavours are greatly improved and the experience is much more enjoyable. Inserting the cotton is much simpler and does not pose any particular problem.

Vaping with the Dead Rabbit V3 RTA is particularly good. Mounted on a mech mod with a pair of Ni90 3×28/38 Aliens stabilised at 0.12 ohms and with the airflow fully open, it produces huge, dense, warm clouds, perfect for those who love gourmet flavours. The flavours are excellent. With a pair of Ni80 2×27/38 Fused Clapton stabilised at 0.18 ohm and 60W on an electronic box with the airflow half-closed, it is just as good. The vapour density is still excellent and the flavours are there.