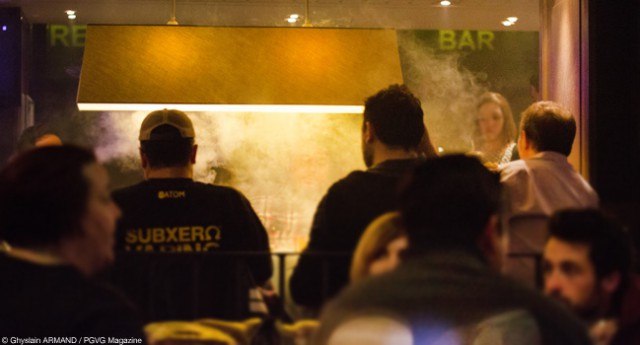 Another reassessment of second-hand vaping

The objective of the scientists was primarily to measure the retention of nicotine, of propylene glycol (PG) and of the vegetal glycerin (VG) by vapers and, secondly, to characterize the pharmacokinetics of nicotine.

Based on their experiments, they were able to make the following observations:

The e-cigarette delivers comparable or even higher levels of nicotine than tobacco cigarettes, the researchers conclude. Nevertheless, the nicotine concentration in the blood is lower than what is observed with tobacco cigarettes. The authors argue for e-cigarette’s efficiency in reducing craving for tobacco products in the withdrawal process but highlight their ciragettes.

For Jacques Le Houezec, this study confirms that second-hand vaping does not exist. The French pharmacologist estimated that the restriction of e-cigarettes in public places is not justified.

The same position was debated by the Professors Linda Bauld (University of Stirling, UK) and John Britton (University of Nottingham, UK) before the Welsh Health and Social Care Committee (WHSCC). When questioned on Public Health, the Professor of Health Policy answered: “UK has one of the best quality data in the world on what’s happening on e-cigarettes at the moment and we are potentially in a unique position (in Europe) to try to balance this type of regulation.”

Along with Le Houezec’s opinion, she added: “If we put the e-cigarette alongside with tobacco and send the message that they cannot be used in public places, we potentially miss the opportunity for more people to move to e-cigarettes and therefore stop smoking.”