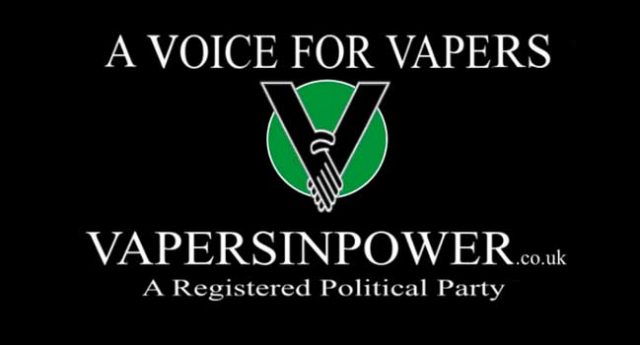 To protect the voice of vapers for the forthcoming regulations

Vapers In Power is a political party formally funded in the UK in March 2015. The idea was born during the adoption of the European Directive on Tobacco Products (TPD). According to its founders, it’s goals are the defense of vapers and to protect freedom of expression before the drastic restrictions imposed by the European text on the promotion of the electronic cigarette.

Vapers In Power recently celebrated a victory against bans on vaping in public places. The Welsh government  already attempted several time to regulate the use of a vaporizer at work or outside, a vaping war in which vaping advocates of Vapors in Power are focussed.

The organization that will present two candidates at the forthcoming legislative election, in May 2016, has just published its campaign manifesto.

The Freedom to Choose in Wales

The drafters of the manifesto attack the “faceless bureaucrats” and the Welsh Labour Party who decided to ban the use of the vaporizer in some interior and exterior areas, public and private, while no scientific evidence supports any damage for bystanders. They deem unacceptable to take decisions without public consultation for a problem that affects so many lives.

The e-cigarette advocates vehemently criticize the TPD’s Article 20 that will “protect the interests of pharmaceutical companies”, “give an advantage to tobacco”. Tobacco will be more widely available than e-cigarettes at the expense of public health, they add.

A campaign manifesto would not be a real political document without a proposal. Party members outline the guidelines for an appropriate regulation of the vaporizer.

They want, for example, that smoker parents of minors may be allowed to provide an e-cigarette to their child, that the warnings on e-liquid bottles definitely reflect their toxicity. The flavored e-liquids should be subject to effective and affordable tests and manufacturers to sanitary inspections.

For these activists, journalists and scientists who distort research outcomes should be blamed because their words have fatal consequences. They announce they will push for actions in this direction.

Vapers In Power is committed to supporting small businesses that are the engine of innovation and stimulate the local economy. It also requires the minimum level of VAT for vaping products alongside nicotine replacement.

The laws restricting individual rights should be based on scientific evidence of harm, say the editors, who rise against arbitrary rules and call on employers who prohibit the use of electronic cigarettes on workplaces to reassess their policy.

“We defend the right to promote e-cigarettes”, punctuate the advocates before concluding that the freedom to choose is not the absence of restriction but to oppose unfair restrictions.

America Diane Caruana - April 7, 2021 0
Last month, Senate Bill 1087, which proposed raising the legal age at which one can purchase tobacco products and safer nicotine alternatives such as...

Alabama to Set Age Limit to Purchase E-Cigarettes at 21

America Diane Caruana - April 6, 2021 0
HB273 would also create a database to ensure the tobacco age limit is being observed.“There are certainly other changes and reforms that have been...