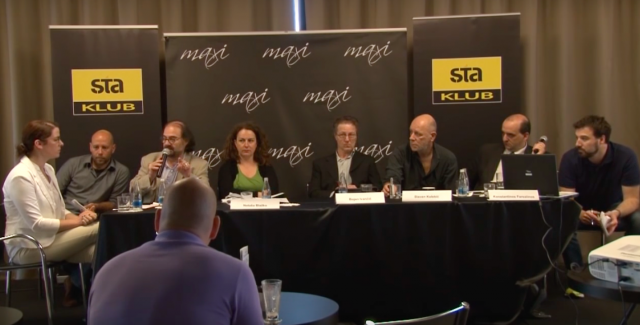 After Konstantinos Farsalinos’ talk, the speech was given to Jacques Le Houezec on the current issues that concern electronic cigarettes/personal vaporizers regulation in Europe.

“Personal vaporizers are not tobacco products, they are substitution to smoking“

Jacques Le Houzec declares that he almost never uses the term e-cigarette because he hates it, since it represents nothing. According to him, personal vaporizer is closer to the function of the device and does not recall its tobacco sibling. He also insists on the inconsistency to force personal vaporizers in the class of tobacco products, which they are not.

The expert in smoking cessation is very critical with regard to the EU directive on tobacco products. According to his analysis, the EU regulation was made by people who know nothing about the product and its use, it is further based on fears and beliefs from a tobacco control community that did not hear the advices from tobacco experts and did not want to listen users. The speaker explains that, in the domain of tobacco harm-reduction, users are the key actors, the first experts who need to be asked and heard. The users also contributed to improve the product, and they achieved that within only a couple of years.

The delay, according to him, is too short between the decision to apply the directive and its forced implementation by the different countries. Even if some scientific studies have been rapidly carried out, for example by K. Farsalinos himself or by R. Polosa, most scientific questions require much more time than the EU left to researchers. For example, cohort surveys and clinical studies are ongoing, delivering some answers but most of these answers ideally need confirmations and request more years of data acquisition and statistical treatment.

Smoking cessation specialists all agree that personal vaporizers are a revolution for their discipline. The scientist declares having never seen as many people quitting smoking is such a short period of time over his more than 30 years of professional activity that also covers the introduction of NRTs.

And the most important, to him, is that personal vaporizers allow quitters to keep pleasure, without suffering.

Some problems in the current regulation

But the major problem is the ban in work places: The scientist recalls that those who use personal vaporizers are those who want to quit smoking. And, unlike smokers who take a 5-minute break every 2 hours to smoke outside, a vaper will obtain his nicotine over the long term by puffing some time to time on his vaporizer. It may take two to three hours for a vaper to get a similar nicotine level as a smoker gets in 5 minutes when puffing on his cigarette.

This example illustrates the different modes of administration of the tobacco cigarette that creates a nicotine hit and the personal vaporizer that doses nicotine on vaper’s demand.

“a product that is working better than anything else, and that costs nothing to the society“

The scientist also recalls that more than 80% of smokers do not require any medical support for attempting to quit smoking, which will further be confirmed by K. Farsalinos who illustrated the success of vaping as a smoking cessation tool in Malaysia, where is is conducting a survey.

Smokers found their own solution to manage their smoking and designed their product, that is working better than anything else, and that costs nothing to the society.

“What will remain on the market will be too restrictive“

Evoking the historical failure of traditional NRTs to lower smoking prevalence, Le Houezec’s position is that professionals need to provide smokers with efficient products, and the regulation, as it has been introduced, will not go in this way. The directive gives plenty of room to adapt the law and enhance the life of millions of people, but it is up to the governments to make the effort of seeking for the counselling of experts.

The success of the First Vape Summit in Paris

In a last part, Jacques Le Houezec illustrates his position by examples and insists on his actions in France where he brought together all stakeholders at the same table to debate on vaping. This first Vape Summit, in Paris last May, allowed finding a consensus on the efficiency of the personal vaporizer to help smokers reduce or quit smoking and on the absence of secondhand vaping.

The event was inspired by what has been done in England, where acceptance by the authorities and by physicians is much more advanced than anywhere else. Despite its apparent strictness, France becomes more permissive with regard to vaping and most counselling in smoking cessation now recommend the personal vaporizer as a possible substitute, even if it is not allowed for physicians to prescribe it.

The birth of an association, SOVAPE, for the defence of vapers

During the meeting, reminds Le Houezec who was the organizer of the event, the Director General of Health promised to create a working group to work on vaping. And this decision motivated the scientist to create an association, SOVAPE, to be an active member of the process.

In contrast, the absence of consensus on advertising and restrictions in public places shows the way of possible adaptations of the law because, even if the implementation has been published in the Official Journal, several parts remain to be finalized by decree to avoid the worst scenario: