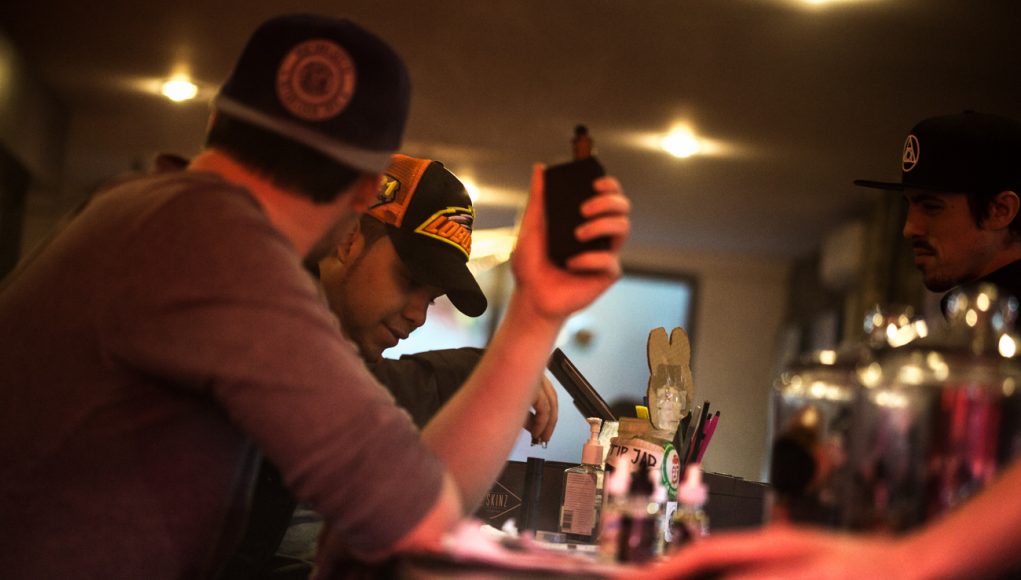 The Arrival – Confusion is in the air

Today is the day. It is August 8th, 2016 – The day in which symbolizes so many entirely different interpretations that ranges from the day all Vapers have been even dreading to arrive, clueless as to what it represents, too depressed to acknowledge, so frustrated they’re in denial, or a day in which they embrace. If somehow, there are actually some Vapers who may embrace this day, I’m hoping it is due to the fact that it’s their 21st birthday or wedding day.

This is because the date today is not exactly bitter-sweet, it is more so simply just bitter. The summer came and went so fast. Remembering on May 5th when the FDA regulations on vaping were announced, it seemed as if confusion was ubiquitous and also that August 8th was a long ways away. Regardless, it did not take long for this time to reach its arrival and the confusion is still spread across the U.S. far and wide.

Lack of information and inaccurate information is surrounding the vape community on all fronts.

Many questions are being left unanswered or being answered very poorly. What are the exact guidelines vape shops must follow now that it will not be business-as-usual? Or will many shops still operate under the business-as-usual platform? Yet, what are the restrictions on giving out samples? Are shops able to give-out samples of liquid that contain 0mg nicotine? Can they charge a small fee if a customer would like to sample an eJuice? If that’s the case, how small can that fee be? What is the amount a fee cannot exceed? Can a portion of these fees be donated towards advocacy? None of this information is being communicated effectively nor accurately. In fact, I’m not so sure I even completely understand what the answers are to many of these questions given the particular scenario.

Subsequently, I have not communicated with every single vaper throughout the U.S., then again that would be entirely impossible. However, the Vaping advocates, Vape enthusiasts and Vape-related business owners and workers who I have spoken with have all been ready and willing to discuss what this particular date truly means to them, obviously because this day affects them the most.

What does August 8th really mean for U.S. Vaping Community?

So, what is August 8th, 2016? It is the day in which the FDA has so vaguely described as the beginning of regulations on the Vaping industry. Yet, is it the beginning of the end of a vibrant industry? Who knows? Some of what we do know is that vape shops can no longer give out free samples of eLiquids – meaning is someone who prefer to test-out an eJuice before they decide to purchase it, then they are either unable to do so or they are able to as long as they provide a small fee. Or, it could mean that shops can still give-out samples as long as they are 0mg nicotine – then again,most shops I visit have always provided customers with samples that are 0mg. Is it easier to see where the confusion sets in? I’ve heard many different versions of answers from many different shops.

Not to mention, along with no more free sampling, there is another guideline which restricts vape shops from building coils for their customers, an important portion of the skillsets offered by the workers of vape shops in which so many customers rely on. Luckily, I was taught very well on how to build my own coils, but if I was one of those customers who relied on this service, I would be absolutely irate, confused, and disappointed.

From this Monday and beyond, there is no longer any new products that are able to be released in the vaping industry.

The final and most debilitating and disturbing restriction to go into effect as of August 8th, 2016 which is also attached to the federal guidelines set-forth by FDA “Prohibitionist” fans is that from this Monday and beyond, there is no longer any new products that are able to be released in the vaping industry. Not one new product – no mods, no tanks, no RDAs, no coils, and basically anything the FDA defines as a tobacco product (even though all the products the FDA define as a tobacco product are technically not tobacco-related) can no longer be accepted to be sold out of any U.S. vape shops.

This specific restriction has created much speculation that a Black Market, an underground economy where monetary transactions are made and never reported to the government, will most definitely become a vaping community stronghold or standard for purchasing goods and supplies – a much riskier alternative that would invite far more safety precautions.

All in all, the 8th of August is the day Big Business and Big Government has decided to launch an attempt at destroying the vaping industry from within. If this were a collegiate level course offering, it would be titled “Politics 101 fueled by Economics 211.”

How do Vapers truly feel on this day?

Given the strange, slightly aggressive attitudes being expressed by countless Vapers and Vaping groups, it is very difficult to tell where many vapers stand at this point in time. So much animosity and manipulation has been occurring from within the actual vape community, so many vapers are fed up with the inappropriate behaviors and immature attitudes.

Confusion is everywhere, so where are the answers?

Much of this can be seen all throughout the social media outlets which many vapers subscribe to, venting and carrying out their feelings about what is transpiring from the FDA regulatory overreach on the sale of vapor products in the U.S. – the land of the free. Free to what? Free to destroy small businesses rather than watch them flourish? Free to restrict others’ decisions about quitting smoking? Free to determine that a known cancer-causing, disease ridden act is more important to protect than it is to preserve a proven, safer alternative? As noted, confusion is everywhere, so where are the answers?

Considering that this is the beginning of the FDA regulations, it was very important to speak with vapers and vape shop workers about their feelings and what August 8th means to them on the day of August 8th. In summary, it seems most Vapers are feeling a great deal of confusion and anxiety.

Randi Santos, a vaper from Pennsylvania, she says “I feel like a lot of companies and shop owners have failed to inform and educate the people supporting their business on what they could have been doing prior to august 8th. Now everyone is starting to wake up. Why didn’t they wake up everyone before.

I am not a manufacturer I’m not a shop owner.  I do not profit from this industry. I also feel extremely bad for the companies and shop owners whom were awake and educating way prior to.  But It’s all really depressing, but because I do not profit. I still end with freedom of speech and will still educate people whom I encounter that vaping is healthier than smoking. It’s been questionable and highly speculative, but companies can still give samples with a small fee – which they will like a penny or a dollar and that may also not wake up enough people. Again, depressing. Which is why I’m just going to indulge in some yellow watermelon ejuice and try to stop thinking so I can hopefully get the much needed sleep I need.”

“I don’t understand all the shock and awe about this day.”

Christy Grimes, another concerned vaper says, “I don’t understand all the shock and awe about this day. If people are a part of online Vape communities it’s not like it hasn’t been in our face for a very long time and especially in recent months. Yet NOW everybody is all up in arms and I’m already seeing some people beginning wars with each other online. It’s so sad – I hate to think that this will put people against each other when what we need to is stand together to take action.”

Christy proceeds to say, “I hope that our community will continue to stand together and lead by example – I’m already seeing some distress in it online and it’s disheartening. We need to be fighting the government, not the public or each other. What we need to do with the public is educate and dissolve fear and what we need to do with each other is work together. I don’t understand why people have to become so hostile with each other within their own communities. Feeling a little down today. I’m seeing “teams” arguing against each other, and in my local shop this morning two guys got in a fist fight over the regs and no free samples. It’s ridiculous.”

“This guy was so mad because he was refused to sample this juice. He punched someone in the neck!”

I asked Christy if she could expand on this, she replied, “This guy – he was so mad because Amy (an employee) refused to let him sample this juice, and then another guy in the shop said “dude it’s not her fault, you don’t have to cuss her out about it.” It’s 8-8, new day new rules, and the guy just went for him! Punched him in the neck (because he dodged). They scuffled and the owner broke it up and banned the dude from coming back. It was insanity! I was incredibly pissed as well as embarrassed. All she asked him was for $1 (there was a sign up, too) to sample any he wanted to sample and he took out his frustration with what should have been the gov’t on a customer who was trying to protect the employee from the dudes harsh language and yelling.”

Christy also said, “I’m not saying the shop is doing it right, by charging a dollar for sampling, but that’s what they’re doing. I think most shops are so confused because the regs are there but no specific points for things like the samples. You’re just not supposed to give them for free or even a “minimal fee” but they don’t say what the fee should be. That’s what they were talking about in there this morning.”

A Vape shop employee and advocate who chooses to remain anonymous, shared this: “That’s the whole point: confusion and driving people crazy – no one knows what to do and again like myself included, I sat on my ass because I’m not a shop owner, but I do work in the shop and it seems to me as if I’m going to continuously be falling on my back to understand what all the regulations are and then trying to explain them to my shop owner, very frustrating! I actually text him this morning and told him about the regulations for today regarding sampling and he’ll literally only be coming into the shop today at 4pm, when he should be here all day. I’m just concerned because my boss doesn’t have any paperwork from any of the juice lines that we carry and I don’t know if he’s going to do anything about it. So, I am definitely nervous.” 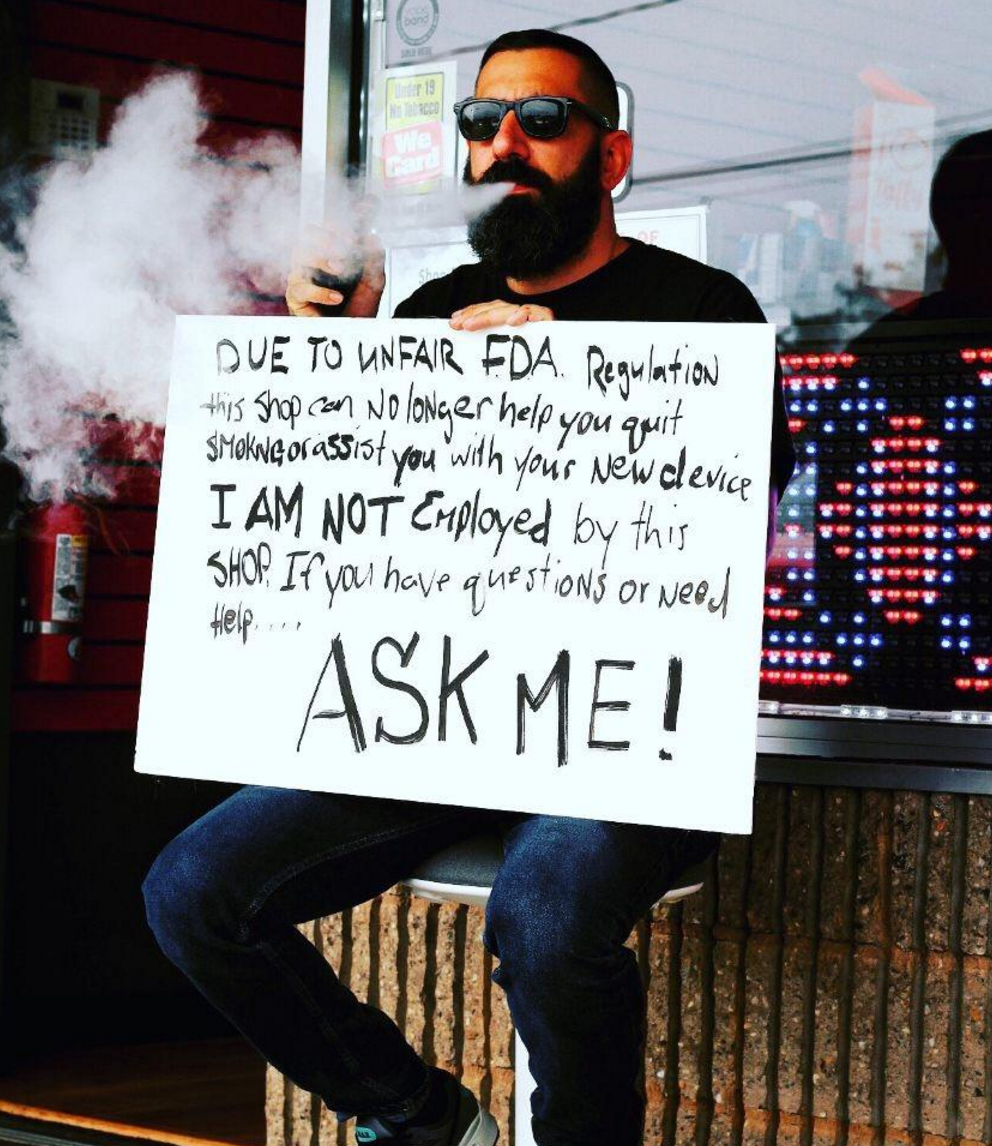