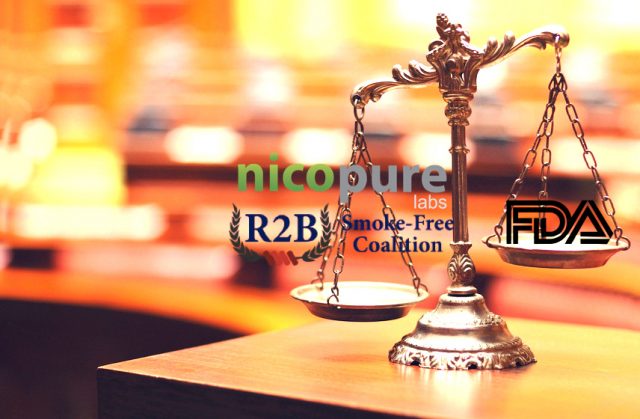 Two briefs of amicus curiae (“friends of the Court”) have been filed in early August to support the vaping industry’s challenge to the FDA deeming regulations.

After having consolidated Nicopure’s and The Right to be Smoke-Free Coalition’s actions, the Judge Amy Berman Jackson, in charge of the lawsuit in the US District Court for Washington, DC, has accepted two briefs, one from Smoke-Free Alternatives Trade Association (SFATA), and a combined brief from TechFreedom and the National Center for Public Policy Research (NCPPR).

A robust support against the FDA

The new Amici (a latin term meaning “friends”) that are not parties in this case, gave with this submission an advisory opinion to highlight other points of view in relation with the case. The two arguments that were put forward are:

Taken together, the briefs concludes that FDA’s Deeming Rule “will destroy the vapor industry” under its current form, that it “fails to consider scientific evidence“, is “arbitrary and capricious“, and is in “direct conflict with Congress’s intent to prevent smoking and aid cessation“.

Other Amicus curiae briefs in support of the consolidated action against the FDA’s Deeming Regulation are expected to be filed in a close future.

The Arizona based Non Profit “Vape a Vet Project”, dedicated to helping Veterans kick the tobacco habit by providing a healthier alternative at no cost to them, already announced preparing Amicus Briefs in support of this case as well.

FDA is not left alone

The Campaign for Tobacco-Free Kids, which will be in support of the FDA, believes that the Agency’s tobacco business is “unfinished” and considers tha: