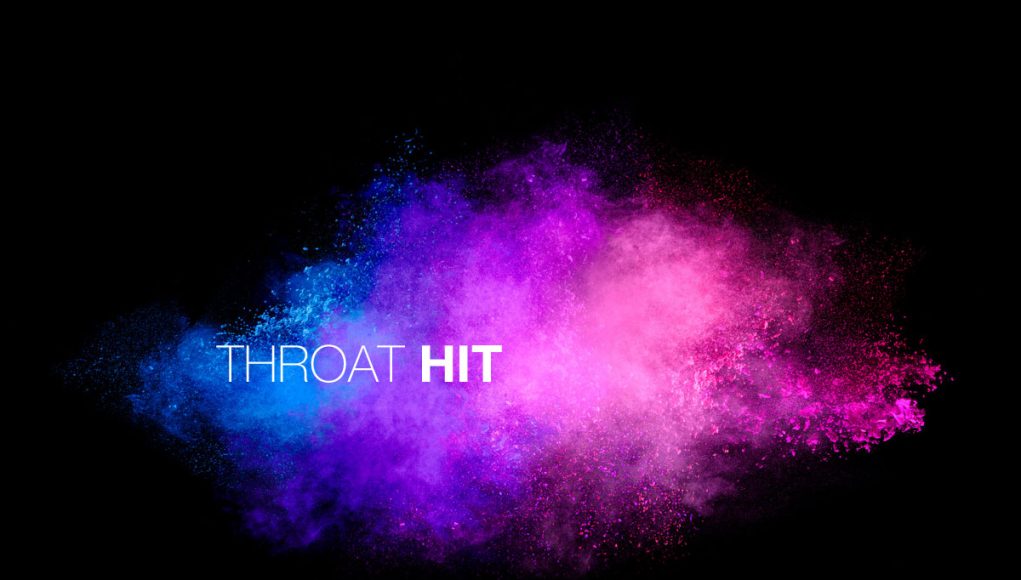 The throat hit can be defined as a contraction of the pharynx/larynx consecutive to inhalation. This sensory moment is well known by smokers and well described by the author Imogen Bevan, anthropologist, in her article entitled “What is a ‘throat hit’?“.

“What the e-cigarette salesperson urged me to discover for myself by inhaling vapour through a ‘powerful top-quality model’ was that the throat is an important sensory canal – a topic rarely discussed by social scientists, or by smokers themselves for that matter.” – I. Bevan

When transitioning to vaping, future ex-smokers often complain that they don’t get the same feeling that they were used to when smoking. As suggested by the I. Bevan, vaping is a sensory journey and the throat an important sensory canal but putting words on this sensation is tricky. Hence, we thought that with  few numbers, it would help readers bette

In a recent internet poll, a joint effort between The Ashtray Blog and The Vaping Post, we addressed this issue to our readers and asked them a series of questions about their “throat hit“, vaping pattern, vaper’s history,… in order to draw a schematic view of what do vapers expect from their e-cigarette and how it evolves with experience as a vaper. Most respondents have been vaping for at least on year (91%) and 56% of them for more than two years. When they started vaping, 52% stopped smoking while the reminder (48%) remained dual users of the electronic and traditional cigarettes. At the time of our survey, a vast majority (92%) of the respondents had abandoned smoking to turn to vaping, exclusively. Which tends to demonstrate that vaping offers a satisfying alternative to smoking.

How important is throat hit? To the question “How important was throat hit when you started?“, 78% answered that it was important to very important. Surprisingly, this preference has faded at present for more than half of those vapers who judged it very important.

Almost half of our panel (47%) consider throat it not important or adopt a neutral position in its respect, now.

The marked decrease of the interest in getting a throat hit is noticeable between the time vapers took up with vaping and present time. This is what is shown, here above, when looking at the height of blue and red bars for the same class (e.g. “less than 6 months” to “2+ years”): while 82% vapers with more than two years of experience judged throat hit important to very important when they took up with vaping, only 52% share the same opinion now.

Superimposed to this trend, it is also remarkable that a greater interest in throat hit is observed with vaping experience, the beginners being less attracted in this sensory experience than the most experimented ones.

What changes with experience?

When questioned about their potential disinterest in throat hit, the most popular answers have been that it was no longer needed when smoking had been abandoned, or that the interest had been replaced by clouds and flavors. The poll also questioned people about the production of vapor. Only 15% were interested in producing a lot of vapor when they transitioned to vaping but a vast majority (55%) was not sensitive to this aspect, either adopting a neutral position of judging it not important at all.

In contrast, when this question was asked with regard to their current status, most vapers consider vapor production either important (42%) or very important (27%) which means that at least 5 out of 7 vapers pay attention to the vapor produced by their device.

What type of device do they use? eGo (59%) and Cigalike (27%) were the elected type of e-cigarette at the onset of our respondents’ vaping history. A few expectedly started vaping with disposable devices (6%) while the remainder chose Mods (8%).

In the course of their life as vapers, only one out of three eGo users kept on using the device, Cigalike and disposable devices have almost been abandoned by their initial adepts who likely turned to Box Mods, that constitutes the privileged product for 77% of our current panel and offer the larger range of possible vaping styles. When digging into their vaping experience, one realizes that within one or two years of e-cigarette use, our ex-smokers became experienced vapers: Their regular nicotine strength switched from above 16 mg/ml (66%) down to less than 10 mg/ml (70%).

Another clue of this transition is that vaping style has switched from initial indirect inhalation (85%) with a restricted or regular airflow (also the only one offered by the most basic devices like eGo) to direct inhalation (69%), the mode through which the biggest clouds are produced and that is offered by high-tech, third-generation Box Mods (e.g. Cloud Chasing or Vaping Tricks for extreme practice). Finally, the PG/VG ratio evolved from high- to mid-PG juices (72%) to mid- to full-VG (84%) ones. Vegetable Glycerine brings more roundness and softness than Propylene Glycol when reaching the throat, it also produces denser and tastier clouds.

A paradoxical finding is that a similar percentage of vapers qualified their throat hit as medium to strong when starting (70%) and keep the same feeling now (68%), in spite of a change of style toward a more aerial vaping and, more importantly, lower nicotine strength. The only solution of this equation is that the third-generation devices (i.e. Box Mods) they turned to are more efficient at delivering nicotine in spite of a decreased strength, to produce similar effects.

Even if our vapers have not been asked how their e-liquid consumption evolved along their vaper’s experience, one can expect that a transition between MTL and DL is accompanied by a greater consumption of e-liquid. By increasing e-liquid use, the vaper uptakes more nicotine per puff, a satisfactory explanation for a sustained perception of the throat hit.

This is what Prof. Jean-François Etter from the the Institute of Global Health in Geneva, Switzerland called a compensation mechanism for nicotine. An undesirable effect of this compensation, according to the author, is an increased exposure to other inhaled substances, some of them being harmful or potentially harmful.

It is noticeable in the survey that almost nobody ignores the nicotine strength he uses in his/her e-cigarette. As quoted by I. Bevan:

“Nicotine is being considered in a new light: more than just biologically addictive, nicotine is key to producing throat contractions, newly considered the essence of the physical experience of smoking.”

But as noticeable is the fact that much more people (19%) did not pay attention to the PG/VG ratio in their early liquids and 10% are still not concerned with it.

How to choose your e-liquid when your start vaping?

Throat hit remains a feeling that plays the most important role when smoking because it is tightly associated by smokers to nicotine content in tobacco cigarettes. Cigarette manufacturers play a lot with this feeling by adding additives that makes the product more appealing to smokers.

It is commonly admitted that liquid nicotine strength in e-liquids is an important parameter to get this throat hit, the strongest nicotine strength the most satisfactory. And the choice of a high strength nicotine is often recommended for a successful transition.

But e-liquid manufacturers are able to decouple nicotine and throat hit experience by mixing different flavors and adding molecules that create mild irritation in the throat or deeper inside. Such molecules like menthol, lactic acid or capsaicin (what makes the chilli “hot”) can be added to e-juices even in low nicotine strength to get satisfaction. Throat hit enhancers are also available separately to tune the experience to the personal taste of vapers, if he/she is sued to use low nicotine strength.

People who rated their throat hit as strong or very strong were more likely to have a tight, restricted airflow than those who said it was weak. The most commonly-used type of device by this panel are tank system vaporizers that constitute the beginner’s choice. Mods generally accept sub-ohm and rebuildable clearomizers and offer more advanced mode settings like temperature control or wattage and the possibility to insert one and up to three customized coils made of different types of alloys on an RBA desk.

Their power compartment may accept up to three regular batteries to sustain the power required by sub-ohm heating heads. And this is probably an asset of the electronic vs traditional cigarette for the user to remain an actor of his vaping style, principally after tobacco manufacturers have decided for smokers how their smoking experience had to be by adding more and more obscure compounds in their tobacco sticks. The user of a personal vaporizer has the full control over his type of vaping, his nicotine strength and his flavors. A “consumer’s choice“, in fact.

What comes out from this survey is that the throat hit appears to be the success of a successful transition with smoking but is no longer wanted by experienced vapers, as expressed in their comments:

“As I recovered my sense of taste and was no longer interested in simulating the experience of smoking, my requirement for a strong throat hit reduced. Now it’s all about the flavour and I hate a throat hit!”

Is vaping a return to simplicity? Probably not given the wider and wider range of e-juices (probably more than 10,000 different flavors by now) and of personal vaporizers that are present on the market. Flavor becomes the first pole of interest after recovery of the sense of taste.

But as soon as you become a little bit more familiar with technology, the access to vaping can be simplified, which will be the object of another file.

Highlights: What changes with experience?

Were are very grateful to the 1126 vapers who took the time to contribute to this survey and we hope that their effort will help smokers decide in favor of the personal vaporizer.