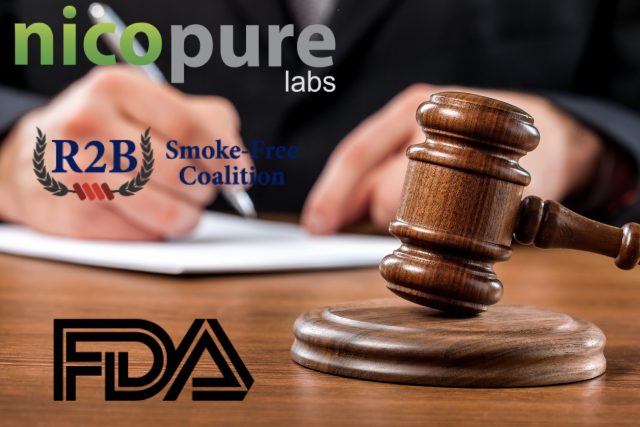 In the current legal action that opposes the vaping industry to the FDA, the District Court of Washington D.C. gave the FDA until August 16 to respond to for the consolidated lawsuit filed by Nicopure Labs and The Right to be Smoke-Free Coalition.

A thick document has been returned by the FDA to Judge Amy B. Jackson on August 16 with the arguments the Agency considers relevant in this case: A memorandum in opposition to plaintiff’s motion. The file is a 102 page document describing the position of the FDA with regard to its deeming rules to counteract those of Nicopure Labs and The Right to be Smoke-Free Coalition. The FDA concludes the argumentation by  sentence “the Court should deny Plaintiffs’ motions for summary judgment, grant Defendants’ cross-motion for summary judgment, and enter judgment in favor of Defendants on all claims“.

Each party has now presented to the court its view of applicable law by submitting a legal memorandum supporting, or opposing, the motion. With this cross-motion, the FDA asked, in due time according to the deadline given by the Court for summary judgment which means that in the Agency’s view, the plaintiffs’ case has to be rejected without further discussion by the Court. It is of course up to Judge Jackson to decide to put an end to end the Nicopure and Coalition’s actions.

Next steps should be plaintiffs’ reply to the Court, expected before August 26 and the confirmation by the Court that both parties are allowed to defend. This will probably come before the date of oral session, on October 11. It will be the occasion for judge Jackson to question the legal representative of the parties on issues in the case. But a closer event will be

Check out our #vape deeming litigation calendar. Bulk of work done in next 10 days. Hoping for ruling in Q1/Q2 2017. pic.twitter.com/sA7GCWdboc

In summary, FDA’s arguments are:

In the introduction, the FDA confirms its anti-vaping rather than neutral position by quoting (without specifying explicit reference) “some evidence that they in fact inhibit [smoking] cessation”. The agency also shortcuts the complex neurophysiological effects of nicotine as “one of the most addictive substances known to man”, ignoring that recent research found it less addictive when delivered under the form of vapor than associated to combusted tobacco compounds.

Is vaping replacing one addiction for another?

And the list of such scientific approximations or misinterpretations is long…

A hearing is scheduled for October 11, 2016 at the District Court of Washington D.C.

In other Words the FDA is arrogant enough to think that Nucotine derived fron non Tobacco sources and VG and PG are a tobacco product when they have nothing to do with Tobacco.

FDA is concerned with health? The results of the PMTA will result in more people smoking and returning to cigarettes rather than using a safer alternative.

The cost of a PMTA is unacceptable especially for the sheer amount of PMTA’s that will have to be filed for thousands of different products.

This is completely unacceptable and this is crony capitalism at its finest.