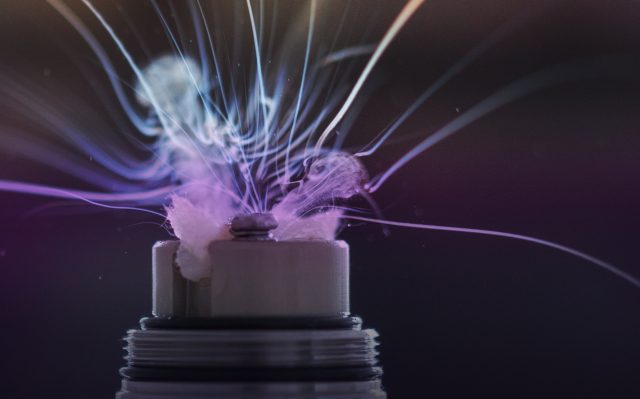 E-liquids, such complex mixtures, are not the only component of the risk with aerosols, other product features (voltage, wattage) have to be accounted for when considering the safety.

ENDS users should use the products with caution until more comprehensive studies are performed.Maciej L Goniewicz

Their pilot experiments confirmed working hypothesis that various vaping products differ with regard to cellular toxicity and cause different inflammatory reactions in cells directly exposed to aerosols.

They looked at “disposable and rechargeable e-cigarettes, eGo tank systems, personal vaporizers, ePipes and eCigars” which, for strongly resemble to what vapers call an e-cigarette. Even if not all models permit power vaping, some of them do.

Power vaping is the art of producing big clouds, of doing vapor tricks. This performance is often remarkable during vape shows, it is also the way some brands market high power devices to a public of expert vapers. The marginal population concerned by power vaping is however very small and only have in common with regular vapers the vaporization of an e-liquid.

Power vaping is the fact of a minority of practitioners

The material used by power vapers is a thousand kilometres away from what vapers use everyday. For this discipline, trickers use full VG liquids with a minimum of nicotine, employ subohm coils and high power devices. Tank systems and drippers are common and the boxes have two to three batteries to reach over 200 W or more. Combining high power to low resistance coils (also called subohm) allows reaching high temperature very fast to vaporize larger quantities of e-liquid and produce big clouds.

Direct lung (DL), also called direct inhalation, is the particular way vapor is first inhaled by power vapers before exhaling dense clouds to produce vape tricks, or cloud chasing. Due to the higher levels of e-liquid consumption, the exposure to potentially harmful molecules is also higher with this theatrical vaping style.

Mouth-to-lung (MTL) is the opposite way of vaping but also the most widespread among vapers who use tight drip-tips and reduced airflow to enhance flavors. This vaping style is naturally adopted by smokers who switch to vaping; it requires less e-liquid and produce a lower volume of vapor. Another difference is that vapers, with MTL, also look for simplicity of use with easy-to-refill systems, pre-mounted coils and generally single to dual battery devices (for the autonomy rather than for the power).

Metabolic activity and cell viability, the possible outcomes of exposure to e-cigarette aerosol

There is a subtle difference between toxicity and inflammation. Toxicants create a direct hazard to the functions of the cells and may induce severe threats to the organ itself, upon prolongated exposure, leading to decreasing cell viability. Hence, cell viability is an indicator of the overall toxicity of the mixture. Inflammatory response is an increase of metabolic activity consecutive to a stress. The cells then produce messaging molecules (here cytokines) that trigger a reaction propagating in the connective tissue. This reaction, for example the excretion of extra mucus, is potentially harmless except in the case of prolongated or repeated exposure, or if the inflammation is complicated by the presence of a pathogen (virus or bacteria).

Vaping is not harmless but less harmful than smoking

Aerosol generation is always a matter of animated debate. Here, the researchers used a Borgwaldt LX-1 with a sequence that is pretty similar to what Dr Farsalinos recommends over 30 minutes (3 s puff duration, every 30 s, with a 55 mL puff volume, resulting in a total of 55 puffs).

The researchers found that the aerosol generated by vaping products, like the smoke of tobacco cigarettes, significantly affected metabolic activity and cell viability. However, the toxicity of e-cigarette, rechargeable e-cigarette and eCigar products was lower than tobacco cigarettes. Intermediate, the aerosol vaporized by the Blu® rechargeable e-cigarette was as inflammatory but less toxic than with other vaping devices, probably because of its lower performance in term of power delivery.

Propylene glycol triggers metabolic activity, so does nicotine which is not poisonous to human cells

A significant increase of the inflammatory response was found in cells exposed to aerosols generated using full PG compared to those of mixed composition. Interestingly, nicotine concentration did not have significant cytotoxic effect on cells but induced inflammatory signals, which is also documented by other assays.

The researchers did not look which of the flavouring compounds caused this cytotoxicity and release of inflammatory triggers. However, they identified menthol, coffee and strawberry flavors as significant impactors on the overall cytotoxicity of vaping products. In turn, the authors were able to identify device power and flavouring additives as key components that significantly affect the potential toxicity of ENDS.

The authors, here, confirm the complex interaction between product features: the combination between a specific e-liquid and the way it is vaporized. Important challenge is the testing of toxicity in different high-voltage or high-power devices.

Green toxicology offers an alternative for time-effective and cost-effective methods to test flavoured vaping products for their potential health effects that Dr Goniewicz urges to undertake. This method termed Green toxicology, consists in screening the potential toxicity of individual components of a complex mixture before mixing the final product. A bank of these data is available for combination of tested products.

Nevertheless, as suggested by the present study, the same mixture may be proven innocuous through the green toxicology data compilation for the recipe and reveal safety issues when exposed to the high temperature of a powerful Mod. Even with battery output voltage fixed at 3.3 V, the eGO tank system generates enough power to exhaust toxic compounds and the viability of bronchial cells.

Will regulations addressing the power of our boxes be part of the future of vaping, in addition to the restrictions over e-liquid composition?

It is in fact the question that comes to mind when reading such scientific research supported by the public funds of the National Institute on Drug Abuse (NIDA). Why the hell do the authors address such marginal practice if not to try to regulate vaping devices over power?

Dr Maciej Goniewicz has been pioneering in the analysis of flavors and he is the one who first identified harmful molecules in e-cigarette aerosols: Diacetyl, acrolein, formaldehyde and more recently the chrerry flavor, Benzaldehyde. Some of Dr Goniewicz’s conclusions have made terrifying newspaper headlines for vapers who wrongly believed that keeping on with smoking was probably much safer than switching to vaping. His arguments have also been taken up by anti-smoking and anti-vaping, ANTZ, campaigners to demonize vaping, making him unpopular among the community of vapers.

It is noticeable that several politically-oriented terms are present throughout the study, especially in the abundant use of “ENDS” (102 times, still) and the term “ePipe” that, together, return in good position on Google, a page of the US FDA, the Federal agency in charge of regulating vaping products. Nevertheless, the authors admit that the e-cigarette can be considered a harm reduction product compared to the lethal combusted tobacco and this is already going in a good direction “Cell viability and metabolic activity were more adversely affected by conventional cigarettes than most tested ENDS products“.

In any case, scientists agree that cigarette smoke is far more toxic than e-cigarette aerosol. Although some compounds in e-liquids deserve particular attention to improve their safety, this shouldn’t push away former smokers to try less harmful alternatives such as e-cigarettes if they can’t or don’t want to quit tobacco. Tobacco kills for instance, more than 480,000 people annually in the United States. This shouldn’t be forgotten when studying e-cigarettes.

Green toxicology: A data bank with safest ingredients of e-liquids