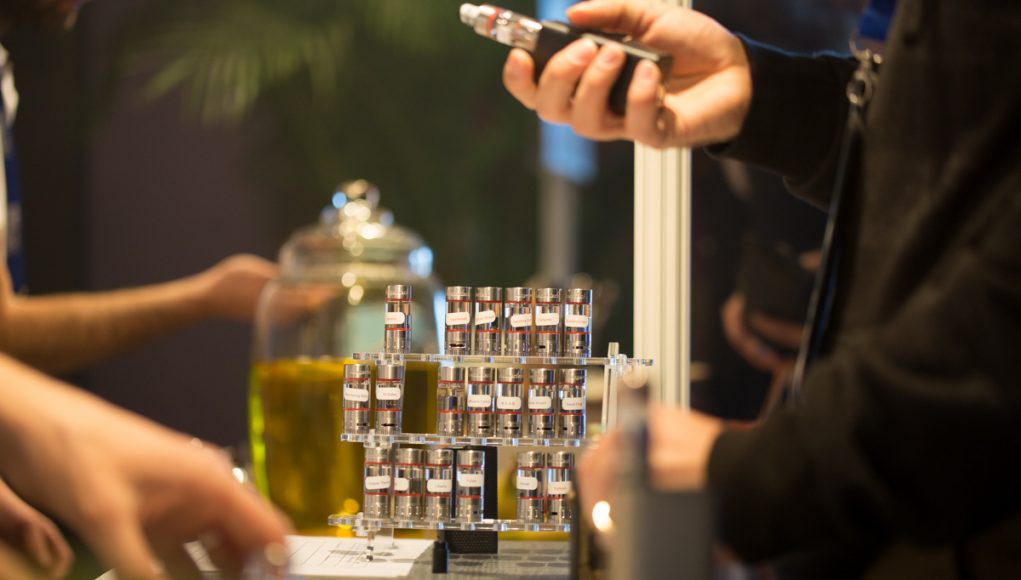 The use of additives is not without risk: it is what reports a study carried out by the Lebanese researcher Najat A Saliba from the Chemistry Department of the American University of Beirut and her team.

Furans are produced when heating sugars in a blend

The authors characterized two potentially toxic molecules, 5-hydroxymethylfurfural (HMF) and furfural (FA) in e-vapor that were not originally present in the e-liquid. The mechanism through which they appear in e-vapour is the breakdown by heat of sugars contained in the e-liquid.

Long-term impacts of smoking never revealed a particular risk associated to furans, why should e-vapor?

The HMF, for example, is not a newcomer since it is a very common ingredient in food and beverages: HMF is present in high fructose syrups, in coffee, in dark beers and dried fruits. In revenge, its presence in e-vapor is a first although it has been well documented in tobacco smoke.

It is also noticeable that despite several decades of research on long-term impacts of smoking, no issue has been raised about furans. The same applies to many other molecules whose toxicity seems to pop up with e-vapor analysis as they have silently shared the life of billions of smokers.

HMF and FA are not linked to any known disease in humans but may increase the risk of respiratory tract damage;  they provoked tumors in mice. The authors are cautious with their findings: “There are a lot of questions about toxicity that are still unanswered and so the question whether electronic cigarette is safer than tobacco cigarette remains open awaiting more investigations and findings,” declared Najat Saliba to Reuters by email.

By operating e-cigarette under different settings, the authors also found that lower battery power was associated with higher levels of HMF, while more power was linked to greater concentrations of FA in the fumes. Shen comments that “toxicity might be directly related to the smoker’s behavior and choices,“, a factor that significantly complicates e-cigarette safety assessments.

Factors complicating safety assessments of e-cigarettes are the variety of devices, the wide range of power, vaping behaviors (puff duration, vaping pattern), the diversity of liquids and the availability of additives. If the manufacturer can constrain the presence of some specific compounds in the e-liquids, he can only make recommendations regarding the use of e-liquids with a specific atomizer or a mod/box.

Sweet juices, a matter of concern?

Not really. As a general rule, everything that tastes sweet should be avoided, this applies to food, beverages and also to e-liquids. However, in a comment on Saliba’s results, Riccardo Polosa, indicates that sweeteners are not common ingredients in commercial e-liquids and, even if present, their concentration is not high enough to represent a significant risk for vapers’ safety. He further notices that the carcinogenicity of furans has not been demonstrated for humans.

“Obviously, e-cigarettes are not risk free, but there is a tendency to exaggerate potential health risks with little or no consideration for the emerging health benefits of these products,”Prof Riccardo Polosa, University of Catania, Italy

The use of sugars should be made with caution mostly because the sugars added to e-liquids are prone to react with other types of molecules. Two of the sweeteners tested, sucrose and glucose, had higher concentrations of furans than unflavored liquids.

The Maillard reaction that is at play to generale furans characterizes a very common suite of chemical reactions between sugars and amino acids. It takes place when cooking food, ageing wine and vinegars and in many other occasions, at different rates with or without heat. The reaction was pointed out earlier as a possible source of aldehydes, not excluding other types of molecules. Here again, the same reaction is shown to produce furans.

However, not all the sweeteners generate furans when heated. Sorbitol, also a sweetener tested by the researchers, did not increase levels of furans in e-vapor. Such sugar alcohols like sorbitol, maltitol and xylitol do not participate in the Maillard reaction, because of their structural properties. The fact that such sweeteners do not produce furans advocates for a major role of this reaction in vaping.

Additives in e-juices, an issue?

Sometimes clearly identified as a known molecule (e.g. ethyl maltol, vanillin), additives are, most of the time, sold under a trivial name that relates to their effects in the e-liquid (e.g. sweetner, Tart&Sour, Bitter Wizzard or Smooth flavor) without any reference to the name of the molecule(s) it adds to the blend.

Additives may slip under the radar of e-liquid regulatory process because they are not initially present in commercial blends and can be freely distributed on the internet. Sweeteners share similarities with flavorings: they are approved by the FDA as food additives (GRAS) but might not be that safe when inhaled. This study shows, after flavorings, that sweeteners also add to the toxicity issue of e-liquids without however reaching the full toxic potential of cigarette smoke. It also reminds that vaping behavior imports for health safety.

Another group of additives remains to be screened for their potential innocuousness or toxicity: Flavor enhancers. They are used in savory foods to enhance existing flavors. Their use expands in e-liquids, especially as additives proposed in the DIY corners of vape stores. They are largely based on amino acids and nucleotides, the most popular being E621, monosodium glutamate. Combined to sugars, amino acids are the rubble stones of the Maillard reaction and its suite of aldehydes and furans that appear so harmful in e-vapor while venerated in fine food and perfumery. Vaping has definitely a lot in common with Culinary Art !

How come cigarettes don’t go through this extreme investigation of ingredients? Makes you wonder…

So, in reviewing Saliba’s study, I found something strange: the sugar concentrations used for testing were 1%-1.91 wt% (11-21 mg/mL), chosen because that’s around the levels that were found in a different study (http://tobaccocontrol.bmj.com/content/25/e1/e10.full); however, the cited study didn’t find the percentage of sugars used, but the total percentage of all the flavorings in the juice. So, flaw #1.

So, while looking for studies about the levels of sugar in e-juice, I found one (https://www.ncbi.nlm.nih.gov/pmc/articles/PMC3992225/) that tested for sucrose and glucose, as well as a number of other saccharides like maltose, fructose, etc. In all 37 samples, it found only sucrose (flaw #2).
In addition, it only found it in concentrations of ≤72.93 μg/g (72.93 being a very high outlier, about 10x the average found), which, compared to the 0.03 wt% (~0.3mg/mL), the absolutely lowest level tested by Saliba’s team, is a 4x-40x difference (and that’s flaw #3). If you estimated HMF/FA levels for commercial e-juice from just that, it’d be in the single-digit nanograms.

Can anyone confirm my math/logic right there? I keep reading these studies and finding these glaring inconsistencies, it’s hard to tell whether I’m just being presumptuous or there’s seriously something fishy going on with these studies.
Plus, this study by Saliba was funded by none other than the friendly CTP of the FDA and the NIH, so double suspect.

Thanks for the info Brother!