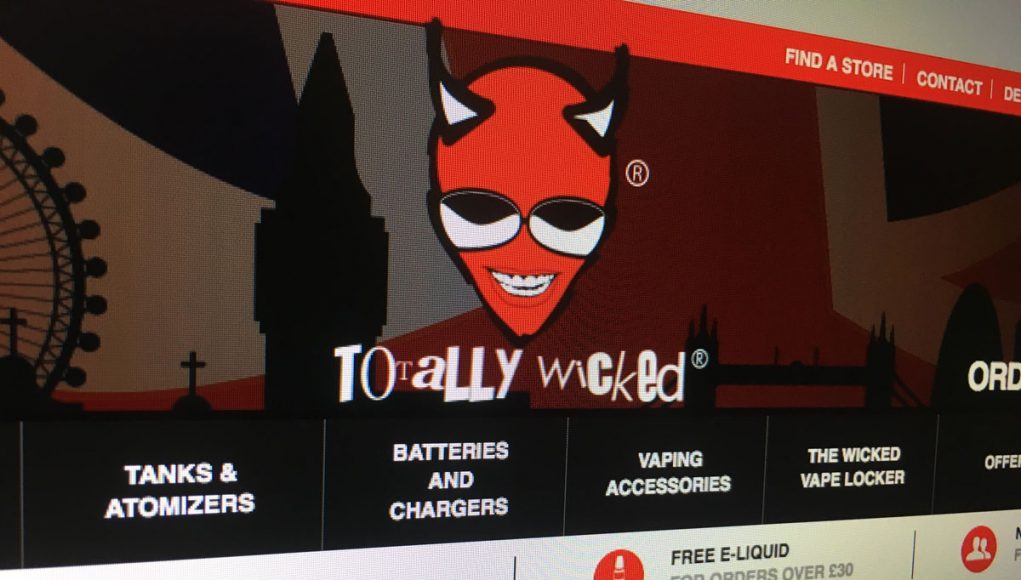 Totally Wicked is a British company with operations in both the EU, and the US. It landed on American Soil in 2008 where it was a pioneer in opening the very first bricks and mortar vape shop in the US. The company has since built a reputable business whilst having a track record of always standing up for their consumers’ rights, hence it decided to speak up.

For the benefit of their customer base and that of their peers in the industry, the business felt it was best to disclose the tragic death sentence that awaits them unless something is done. Like thousands of others, this vaping company will be forced to close its doors in 2018, once the pre-market tobacco application, (PMTA), grace period ends.

A tragic turn of events caused by a government agency whose duty is to protect its people, but is instead contributing to the thriving of an industry responsible for the death of millions, and the demise of an industry that offers a safer alternative.
This is the fate that awaits small e-cigarette businesses and vape shops which simply cannot afford the capital costs associated with completing PMTA’s. In 2010 when the FDA decided to illegally seize their goods, Totally Wicked challenged the agency, and last year in 2015, they did the same to the EU Tobacco Products Directive, (TDP). However, so far, all this has been to no avail.

The FDA seems to be set on shutting down the smaller vape shops, who are truly passionate about selling harm reduction tobacco alternatives, in a move that will allow only the Big Tobacco companies to survive, hence giving them a free pass to reign freely and unthreatened once again.

Totally Wicked will not go quietly

“The FDA may want Americans to continue smoking; we do not”, stated the spokesperson for Totally Wicked. A statement that is sad but very true. Hence in these two years of operations that this business has left, they intend to do everything in their power to campaign and educate people about the tragic turn of events that will perpetuate the serious health epidemic caused by smoking, whilst ensuring that their products are even more accessible than before.

“We intend to offer all our products at even more affordable prices, ensuring that when the FDA does shut us down, as many people as possible will have benefitted from a product that Public Health England classifies as a minimum of 95% safer than traditional tobacco cigarettes.”

The truth about the FDA’s agenda

Totally Wicked’s press release was concluded by stating “This government and its federal bodies charged to defend and protect its citizens have failed the American smokers. While the majority of the rest of the world is moving towards an enlightened position on the transformational potential of consumer vaping products, the USA will retrench itself with a ‘year zero’ firestorm that is already alight in the USA and will consume all independent vape businesses like ours in Summer of 2018”.

This is an accurate rendition of the tragic turn of events caused by a government agency whose role is meant to be to protect its people, but is instead contributing to the thriving of an industry responsible for the death of millions, and the demise of an industry that offers a safer alternative.

Dr. Michael Siegel, a Professor in the Department of Community Health Sciences, Boston University School of Public Health who has 25 years experience in the tobacco control sector under his belt, blogged about this unfortunate state of affairs, pointing out, “If the FDA truly wanted smokers to quit, then it would certainly craft regulations that promote smoking cessation, rather than regulations that block or impede smoking cessation by denying smokers the availability of a wide range of much safer alternative products. And it would certainly not create a regulatory infrastructure that gives a huge competitive advantage to real cigarettes over the fake ones.”

Hope : Some lawmakers are challenging the FDA

However not all hope is lost. Both Totally Wicked and Dr. Siegel agree, that things may change if “Congress decides to look deeper into this”, and this is not a far fetched possibility. Thankfully there are several lawmakers, such as Senator Ron Johnson of Wisconsin, who have been challenging the FDA and are working to stop the agency from acting out its “destructive policies”, whilst promoting different regulations for vaping products, than those for tobacco products. Fair point as Dr. Siegel pointed out, since vaping products “contain no tobacco”.

I just started an article on this very topic. Great job! Your researching about this was certainly needed, thanks for keeping an eye out for all the important factors in the vapor drama that all people, Vapers and non, must be made aware of.
The FDA is installing a Prohibition to squeeze out the small businesses who made Vaping what it is today. It’s still so unforgivable what they’re trying to do. Their misguided, unethical agenda will ruin millions of lives. They must be held accountable…problem is, apparently they answer to no one.