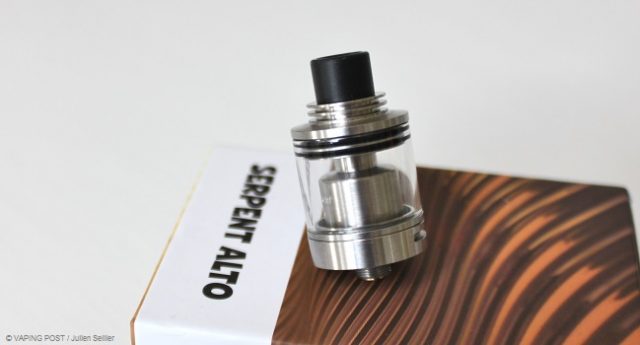 Launched in Spring 2016, the Serpent Mini has rapidly acquired a great popularity among single coil lovers for its high quality, its compactness and its ease of use. Now, Wotofo release Serpent Alto RTA that combines the same features and erases some of the imperfections of the Mini.

The airflow ring is hard to operateDimensions are pretty similar although the Alto is 1 mm shorter, the diameter remains the same but Alto’s tank is reduced to 2.5 ml and loses 0.5 ml compared the Mini. The drip-tip is now made of Delrin, the stainless steel version on the Mini was heating too much. The mouth-piece is also narrower, 0.7 mm compared to the 0.9 mm on the Mini, for a diameter at its base of 0.55 mm. The top cap receives cooling ribs. The cyclopean airflow system is a bit wider than on the Mini, for the same length. The airflow ring is hard to operate when new and requires opening the atomizer to manually adjust the ventilation. Painful. Fortunately, the break-in period is short. Even if the finish is rather good and provides an overall robust aspect because of the limited number of parts and compactness, the threads are not exempt from criticism. The screws that tighten the coil on the plots are of the same poor quality as on the Mini. As usual with Chinese manufacturers, the product comes with many spare parts including O-rings, a pyrex tank, two twisted kanthal coils, an organic cotton pad, screws and a user manual.

The technical features of Wotofo’s Serpent Alto RTA are: The mounting deck has been redesigned for the better. The airflow system reminds me of GeekVape’s Ammit with two air inlets located under the coil an one on a side. It is quite efficient. The mounting deck is still specifically designed to accommodate single coil configurations and, hence dedicated to flavors. Nevertheless, the Alto abandons the horizontal “lay down” concept for a more conventional vertical terminal. Coil leads are secured with an Allen key.

Serpent Mini’s deck exposed to the risk of short-circuits with the bell when coil leads were not cut short enough. The issue is definitely fixed with the Alto. Terminal holes are only 2 mm wide and won’t accept the most complex resistive wires. Wicking the coils is not complicated, the wick needs to be cut to fit the width of the deck so that the tips are placed just above the wick holes. Slit the wick a little bit to bevel the cotton and prevent dry hits from happening.

Like most of the top filling atomizers, take good care to close airflow holes otherwise the liquid will leak out. With all those precautions concerning the wick and the airflow system, the Serpent Alto doesn’t leak, but seepage occurs when operating the airflow ring. The Alto is polyvalent and offers the possibility inhale direct lung or to vape mouth to lung, depending on the resistance you mount in your atomizer. Decreasing its value will necessitate to gradually open the airflow. Around 1 Ω with an airflow positioned to one quarter, you will be able to enjoy high quality vaping mouth to lung.

Vaping is smoother than with the Serpent Mini and, thanks to the cooling ribs and the Delrin mouth piece the top cap remains warm without burning the lips, even in chain puffing. It is hard to determine whether the rendering of flavors is better or not with the Serpent Alto compared to the Serpent Mini but the feeling is at least equivalent. Given the high quality of the Mini, the Alto is certainly also in the higher range of the RTAs.

In summaryThe twisted Kanthal resistance coils included in the pack peak at 0.32 Ω. Until 45 W, no problem, the vapor is warm with the airflow wide open and its volume is abundant. Starting at 50 W, the vapor become hot but the sensation is soft thanks to the cooling ribs. No dry hit occurred, even with a juice at 80% VG. The security is reassuring for this atomizer designed to operate between 20 W and 30 W.

Rating of 4.1/5: Wotofo identified perfectly the weaknesses of the Serpent Mini and proposes an upgraded version with the Alto, an excellent RTA designed for single coils. Compact, easy to use and well finished, the experience it offers to vapers, even to beginners, is excellent in terms of flavors. It also accepts extreme situations in security and its price is reasonable given the quality of the product.