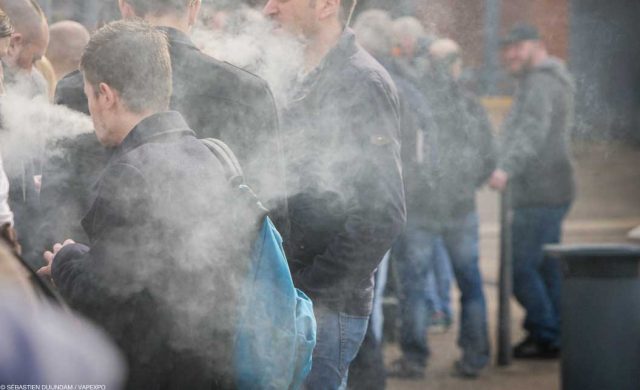 The California Department of Public Health (CDPH), has been carrying out air sampling in vape shops throughout the state, as part of its initiative to determine the health effects of second-hand vapor exposure.

Earlier today in his blog, Public Health Expert Dr. Michael Siegel pointed out that the results for this report were obtained from a relatively small and non-ventilated vape shop, where many of the employees and 13 customers were actively vaping while the sampling was taking place, hence what would be considered a situation presenting a high level of exposure to second-hand vapor. However, given all these unfavourable conditions, the results still reported no dangerous levels of exposure to any hazardous chemicals.

Dr. Michael Siegel quote : “This study, although conducted under very high exposure conditions in a small, non-ventilated vape shop with many employees and customers vaping and clouds of vapor visible, did not document any dangerous levels of exposure to any hazardous chemical.”

The main results of the air sampling go as follows :

Dr. Siegel pointed out that the level of formaldehyde detected, is consistent with the levels normally found in indoor and outdoor air levels under baseline conditions, adding that the only other chemicals detected were ethanol (alcohol) and isopropyl alcohol.

This study (…) did not document any dangerous levels of exposure to any hazardous chemical.Dr. Michael Siegel

“This study, although conducted under very high exposure conditions in a small, non-ventilated vape shop with many employees and customers vaping and clouds of vapor visible, did not document any dangerous levels of exposure to any hazardous chemical. Nicotine exposure was essentially non-existent. Formaldehyde exposure was no different than in many indoor and outdoor environments at baseline. Acetone, acetoin, other aldehydes, toluene, benzene, and xylene were not detected. Chemicals that have been associated with “popcorn lung” were also not detected by the standard method.” stated Siegel.

No justification for governments to ban vaping

“This study adds to the evidence that under real-life conditions, secondhand vaping does not appear to pose any significant health risks.” concluded the public health expert. He added that whilst he himself has been behind many of the smoking bans that took place, based on this current evidence he fails to see a reason as to why governments should ban vaping in public spaces. “With regards to vaping, I just don’t see any reasonable evidence at this time that it poses any significant health hazard to bystanders.”

The CDPH has still not released any official data pertaining to this study – last updated on 04/07/17.

The link you have for the data leads to a completely different study from 2014. Do you have a link to this new CA report? I would love to see the actual information. I am trying to prevent a clean air ordinance in my city from banning vaping in my vape shop.

Dear Holly,
I apologise for not double checking, but yes clearly I have been led to the wrong study.
I looked into the matter and apparently the CA Dept of Public Health has not released any of these studies yet. You can read Dr. Siegel’s blog, which is where I obtained my information from :
http://tobaccoanalysis.blogspot.com.mt/2017/05/vape-shop-air-sampling-by-california.html
Unfortunately there seem to be no links to the actual study at the moment, but if you follow Dr. Siegel’s blog I’m sure he will add links to the study as soon as it’s out, from my end I will also add it to this article as soon as I have it, and notify you!!
Regards.

Thank you. I will continue to watch for the current data. I appreciate your efforts to produce media that shines a positive light on the vapor products industry.

It’s still an ongoing study so full data won’t be released until it’s finished I believe, Siegel just thought he should share the results so far because they were unexpected him being an anti vaping lobbyist.

So you admitted your whole article was based on the wrong study, yet you haven’t taken it down or edited (or made a disclaimer)?

Dear Mr. Morrison,
The article was not based on the wrong study but on data shared by Dr. Michael Siegel from a study that is yet unavailable to the public. My mistake was linking to the wrong study after the article was finished.
For further info check out Dr. Siegel’s blog :
http://tobaccoanalysis.blogspot.com.mt/2017/05/vape-shop-air-sampling-by-california.html
Regards.

Unfortunately, many studies like this have been done but will continue to be buried in mainstream media due to it’s damaging results to the tobacco and pharmaceutical industry. I cannot release the information, but I can say for sure, this report is legitimate. Why can I say this with 100% accuracy? It was performed in my shop. 🙂

Vaping was the best thing that happened to me as it helped me quit smoking over 3 years ago now, still vaping but at 0% nicotine for they enjoyment it gives me. I think the hand to mouth soothes me still.

I guess the question that everyone ignores is why do you people feel the need to inhale and exhale nasty smelling substances from a pretend penis?

Oh for Christ sake. Nasty smelling? The smell of strawberries and baking cinnamon rolls is nasty? It has been proven they are very effective of helping people quit smoking cigarettes which really are nasty smelling, not vapor from an ecig.

me
Reply to  Phillip Raper

James A
Reply to  Osceola71

The question that you ignore is why we like something that you don’t like or fully understand? People guess too much before spewing forth garbage like this online. I’m sure you think everyone should be just like you and lead a miserable, hateful and troll filled life with no acceptance of other peoples choices.

If your penis looks like a box mod, you seriously need to go see a doctor. Of course, that’s making the assumption that you have one in the first place. And while you’re there, you can get your nose checked too. If you think peaches and cannolis smell nasty, then you’ve got some seriously bad wiring in your brain in regard to your olfactory senses.

Oh, and if you automatically think of anything remotely cylinder-shaped as a penis, you should probably see a psychologist as well. Having dick on your mind all the time can’t be healthy.

The FDA doesn’t care if its harmful or not. It’s all about control, and money.

about the level of Formaldehyde detected, is it a typo error about the number? is it 0.72 instead of 7.2ppb? because 7.2ppb is very high according https://www.cancer.org/cancer/cancer-causes/formaldehyde.html …

You want me to trust the study of an admittedly biased person?
There’s no link to the study? Am I missing it or…?

Study was not done by an admittedly biased person. It was conducted by a person that lobbied against vaping.

The want to ban it, because the states, like California spent all the money they got from cigarette taxes before they got the money, and they can’t pay back the loans. Ita all about money, and vaping is costing them money. That’s why they want the ban. The government doesn’t care about your health. They care about their pockets

Community Diane Caruana - May 23, 2022 0
Consumers find nicotine vaping products attractive and are switching to using  them in increasing numbers worldwide.Titled What is Tobacco Harm Reduction?, the publication provides...