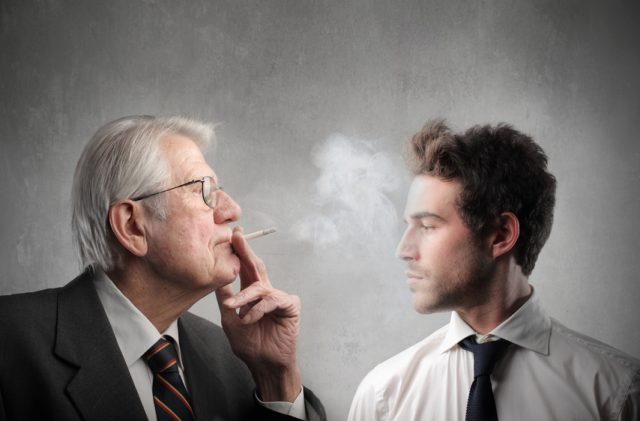 Many regulations in Europe have banned e-cigarette use in public places because of the precautionary principle of secondhand vaping. Yet, secondhand exposure to tobacco smoke is thought to be much more harmful than e-vapor and at the origin of heart and lung diseases. Lung cancers are one of the most documented risks to which smokers are exposed and are also associated to secondhand exposure.

A recent meta-analysis [1] of tobacco smoke exposure and lung cancer was carried out by statisticians in the British consulting firm PN Lee Statistics and Computing Ltd. They studied more than a hundred of publications and the potential causal relationship between passive smoking and lung cancer.

It has been suggested earlier by the same authors revisiting the association between environmental tobacco smoke exposure and lung cancer risk that “a substantial part, if not all, of the relationship may be due to bias resulting from confounding by other lung cancer risk factors“.

The 102 studies have been performed in North America, Europe and Asia during the period 1981-2015. Indeed, from their current analysis, the authors showed that almost 85% of the study provided no statistically significant increased risk, and more than one out of four showed a negative, sometimes significant, correlation between passive smoking and lung cancer.

It also comes from their re-analysis that a positive correlation, although not significant, could be drawn between passive smoking and lung cancer over the whole dataset but an inverse relationship was found for Europe and North America alone. Only Asian studies allowed describing a positive and significant relationship.

Such negative correlations would indicate that no causation exists between exposure to smoke and lung cancers in Europe and North America. The same likely applies to Asia but cultural differences may still bias the results, as suggested by the authors who noticed that Asian women are probably more prompt to deny their smoking (underlying “smoker misclassification”).

It is intuitive, from this study debunking the risk of lung cancer upon secondhand smoke exposure, to challenge smoking bans, at least in open outdoor places. The authors however refrained from expressing their feeling about smoking bans but it seems obvious by reading their lines that authorities setting up smoking bans everywhere are fighting their own fears and a real danger from secondhand exposure can safely be discarded.

Unless admitting that smoking ban are set up to de-normalize smoking? But in this case, the scope of law goes beyond the simple protection of individual’s health.

An abuse of the precautionary principle

Given that vaping is at least 95% safer than smoking and that harmful including carcinogenic compounds of e-vapor are lower [2][3][4] than in cigarette smoke, it is hard to believe in the existence of secondhand vaping. It is also hard to accept that the product may be banned. In agreement with K. Farsalinos’ comment in Slovenia, makes any ban on vaping at least indoor but a fortiori outdoor a abuse of the precautionary principle.

Many smokers have turned to personal vaporizers to manage their smoking and, among them, some even quitted the habit with pleasure and much more easily than with NTRs. Because vaping has a different pattern compared to smoking, the classical image of smokers taking a 5-minute pause every two hours to get their nicotine fix cannot fit to vapers. Vaping bans, especially in workplaces, is deleterious to anyone willing to quit smoking.

Two Major health trusts in the UK (Nottingham University Hospitals and the Scottish NHS Greater Glasgow and Clyde) have lifted smoking bans on their grounds, in order to help users wean themselves off tobacco. A sign that a sensible regulation is possible?

Scientists agree that cigarette smoke is far more toxic than e-cigarette aerosol. Although some compounds in e-liquids deserve particular attention to improve their safety, this should not prevent smokers from experimenting less harmful alternatives such as vaporizers if they can’t or don’t want to quit tobacco. Tobacco kills for instance, more than 100,000 people in England and 4 to 5 times more in the United States. This shouldn’t be forgotten when regulating such products.

[4] Burstyn I., 2014. Peering through the mist: systematic review of what the chemistry of contaminants in electronic cigarettes tells us about health risks.BMC public health, 14(1), 1./small>

Of course there is no risk from second hand smoke (SHS), The passive smoke hoax was constructed by the tobacco control movement to denormalize smoking. The majority of studies discount SHS as a risk.

In addition, one large study looked at 38 years worth of data. Engstrom, JE and Kabat, GC. Environmental tobacco smoke and tobacco related mortality in a prospective study of Californians, 1960-98 BMJ 2003; 326:1057. This study found “No significant associations were found for current or former exposure to environmental tobacco smoke before or after adjusting for seven confounders and before or after excluding participants with pre-existing disease.”

CONCLUSION: Most, if not all, of the ETS/lung cancer association can be explained by confounding adjustment and misclassification correction. Any causal relationship is not convincingly demonstrated.

Fully agree with Vinny Gracchus! The only substantial “leg” for the whole workplace smoking ban argument has been the EPA Report of 1992 which not only excluded studies that disagreed with its desired result, it STILL had to juggle the remaining stats by doubling the normally accepted scientific standard of error in declaring its findings “significant”! (The one-tailed/two-tailed statistical excuse is clearly invalid since the largest international study on childhood exposure, a study run by the WHO itself, found a completely valid statistically significant PROTECTION from lung cancer among children exposed to tobacco smoke while growing up! See http://bit.ly/ETSTable for details on that and 130 other studies!)

Jerome Harlay makes a VERY critical point in this piece!

In both cases crazy people can take femtograms and attograms and nanograms of exposures and claim that such exposures are equivalent to the activities themselves. The craziness and lies are clearer in the case of vaping, but they spring from the same fount: The Lies of the Antismokers. If you go to http://bit.ly/TobakkoNacht and click on the “Of Vapors And Vapers” and “Giblets” options in the “Book Selections” tab under the front cover, you’ll see EXACTLY how they use the same techniques, manipulations, distortions, and lies to vilify vaping that we allowed them to get away with for so long in vilifying smoking.

Understanding the basis of such lies and examining the history of how they’ve been used against smoking is ESSENTIAL if the fight against the Antismokers turned Antivapers is to succeed and understanding and exposing their fundamental weakness in BOTH arenas is critical in the fight. Jerome Harlay and Vinny Gracchus understand this, and it’s vital that that understanding be spread more widely.