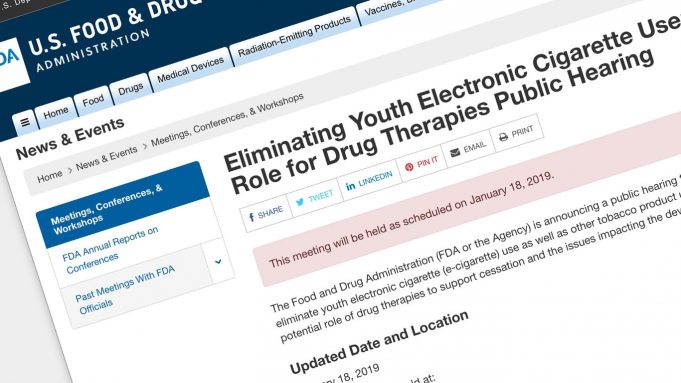 [Note: This column was updated to reflect current information and comments from Bill Godshall.]

Public health advocates gathered at the Maryland campus of the U.S. Food and Drug Administration (FDA) on January 18th to discuss the implications of the so-called youth vaping epidemic. During a public hearing regarding potential regulatory action, representatives from some of the country’s leading anti-tobacco organizations utilized an event that was intended for even-handed discussion as a platform to misinform the broader public on e-cigarettes further. Though I wholeheartedly respect and support the sentiments of curtailing youth vaping, the hearing was hijacked by activists who want to see vaping in the United States forever changed.

So many other harm reduction activists and I were left speechless during the hearing. In no way was the opinion of the vaping industry, nor the academic backers of vaporized harm reduction granted the respect needed to have a productive conversation during the hearing. Instead, FDA’s representatives — including Dr. Jennifer Rodriguez Pippins of Commissioner Scott Gottlieb’s entourage — bought into the one-sided debate with open arms. One of the key takeaways from the hearing that became the most troubling was how marginalized harm reduction approaches were. As we’ve seen in the national debate surrounding vaping, public health regulators and activists want to force flavor and marketing bans on most vaping products. Usually citing the apparent push by manufacturers like JUUL to market to minors, the calls for a series of bans were abundant.

For example, Dr. Bonnie Halpern-Felsher of Stanford University School of Medicine urged FDA to ban all flavors and marketing for flavors. Not to mention, she also advocated for the agency to prevent e-cigarette companies from making claims that their products are safer than traditional combustible tobacco cigarettes and offer potential therapeutic benefits. Halpern-Felsher’s recommendations weren’t unique, either. Truth Initiative’s Dr. Amanda Graham called on FDA to also ban flavors and marketing while harping on the “gateway” effect of e-cigarettes.

The most troubling of claims from the hearing came from anti-smoking activist Ruth McCormack of Long Island.

Both Halpern-Felsher and Graham fail to recognize the benefits of flavors for adult smoking cessation. A growing body of academic work reveals that flavors provide e-cigarette users with useful and satisfying alternatives to combustible tobacco. For example, a 2015 study published in the academic journal Nicotine & Tobacco Research found that “e-cigarette flavors tested appealed more to adult smokers than to nonsmoking teens.” (Here are eight other studies compiled by the New York State Vapor Association.)

But, the most troubling of claims from the hearing came from anti-smoking activist Ruth McCormack of Long Island. McCormack dared to claim that fourth graders are going through several JUUL pods a day and that the act of vaping, thus the consumption of nicotine, caused a teen to jump in front of a train and commit a suicidal act.

“The often fanatical solutions proffered by many of the speakers marginalized harm reduction and further confused the public,” says Chris Howard, general counsel of E-Alternative Solutions, in an email. Howard reflected on the hearing and arrived at similar opinions as mine.

“I am very disappointed in the outcome,” he said, regarding the hearing. Much of what was presented by the opposition are results of misinformed opinion and emulate the scare tactics of activists’ attempts to fight “reefer madness,” for example. Like the outlandish claims of the 1936 propaganda piece that infers that marijuana use leads to insanity, vaping opponents seek to make similar claims to dissuade the public. All I can say is that the FDA failed to give industry representatives and harm reduction activists due diligence.

Now, the FDA is expected to announce the new layers of regulatory encroachment on the vaping industry in the coming weeks.

“While clearly, the phenomenon of youth experimentation with e-cigarettes deserves attention, FDA allowed the further spread of misinformation regarding the relevant issues,” Howard added. “Instead of a forum to discuss alternatives to stem youth usage and addiction, the event proved to be a platform to facilitate many sensational and unsubstantiated anti-vaping claims. Several activists overstated risks associated with vaping and offered extreme solutions of last resort as opposed to measured stepwise approaches designed to end youth vaping and promote harm reduction. As a result, viewers were left with a muddled view of the benefits of vaping at best.”

Now, the FDA is expected to announce the new layers of regulatory encroachment on the vaping industry in the coming weeks. In my conversations with Howard and other harm reduction activists, they expect Commissioner Gottlieb to levy even more invasive regulations than those initially considered. These measures are likely to include flavor bans, restrictive marketing regulations, and politically-motivated initiatives to sensationalize further the long exaggerated claims against vaping.

Take the words of Bill Godshall, for example. Godshall is the founder and executive director of Smokefree Pennsylvania and was one of the few harm reduction advocates who represented the pro-vapor side during the hearing.

“Gottlieb used the hearing to once again demonize, bully and threaten to ban the nicotine vapor industry before the Deeming Rule’s 2022 execution date,” Godshall wrote to me in an email. “Gottlieb still hasn’t formally proposed any regulation (in the Federal Register) to ban sales of flavored vapor products at retail stores that allow youth entry (as he claimed two months ago) and hasn’t even issued a Guidance for Industry (telling manufacturers, distributors and retailers how to comply), perhaps because the TCA prohibits FDA from banning sales of any tobacco product at any category of retailer.”

But, the regulations are still on the horizon as clearly noted by the aftermath of the hearing.

Additionally, Gottlieb posted to Twitter in “Trumpian” fashion this past Saturday that the vaping industry faces an “existential threat” if youth vaping isn’t curtailed. His whole tweet reads: “I still believe e-cigs offer an opportunity for currently addicted adult smokers to transition off cigarettes and onto products that may not have the same level of risks. But if youth use continues to rise, the entire category faces an existential threat.” Gottlieb followed up in the same thread: “I believe if every currently addicted adult smoker switched completely to e-cigs it would provide a tremendous public health gain. But that opportunity is in significant risk if kids use continues to rise. There’s an opportunity now for responsible parties to address youth use.”

Not only are the tweets irresponsible, but it also proves that Gottlieb may have already made up his mind or is torn on the potential of shuttering a multi-billion dollar industry.

“I’m hoping that Gottlieb will see (or be informed about) my presentation, as I suspect that vapor prohibitionists at CDC and FDA have not informed Gottlieb about the key findings in the [Department of Health and Human Services] youth vaping survey data,” Godshall wrote in response after I emailed him questions about his presentation at the hearing. As my thoughts aligned with Howard’s above, Godshall is right on the money. When we consider the impacts of this hearing and Gottlieb’s Twitter rant, the dawning of new regulations–even bans–is nigh.