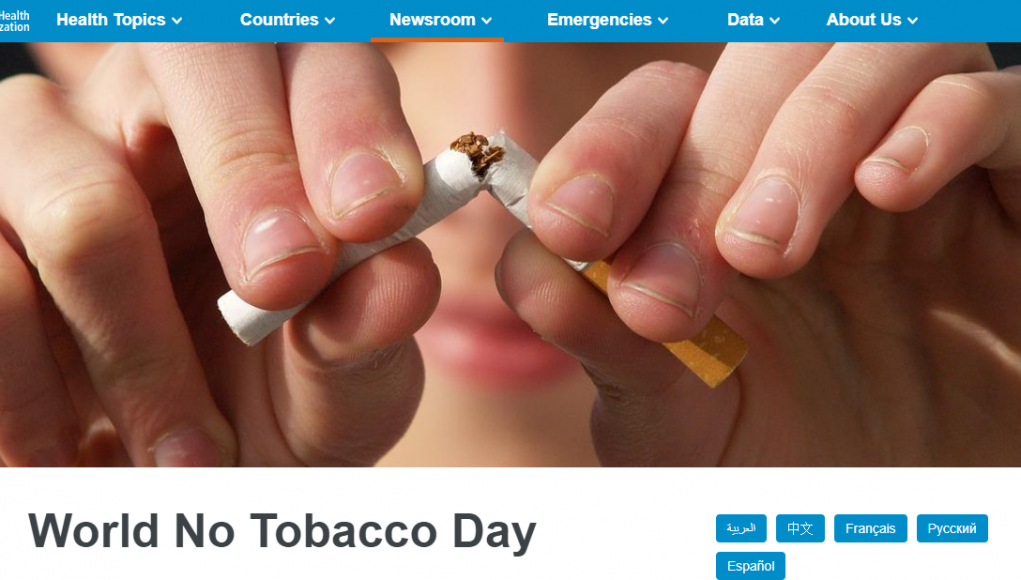 In total contrast with other health entities such as Public Health England (PHE), instead of encouraging smokers to switch or quit smoking via safer alternatives, the World Health Organisation’s World No Tobacco Day (31 May 2020) attacked low-risk alternatives to smoking. This has once again compelled several international health experts to criticize the agency’s stance and agenda .

The WHO inaccurately claims that ENDS and smokeless alternatives do not help smokers quit smoking; are more harmful than combustible tobacco; and that nicotine is equivalent to heroin in terms of addictiveness.
Similarly, earlier this month, in a letter to New Zealand’s Health Ministry, Kiwi Vape Association AVCA, urged local authorities to reject the WHO’s inaccurate position on e-cigarettes and support current global scientific evidence instead. “We sincerely urge your delegates to the COP9 to uphold ‘right to health’ and the implementation of tobacco harm reduction based on factual scientific evidence, as the key strategy for tobacco control addressing the existing gaps,” wrote the association.

In line with arguments by countless other harm reduction experts and entities, the AVCA pointed out that despite evidence to the contrary, the WHO-FCTC continues to issue information, reports and guidance that contain several inaccuracies with regards to e-cigarettes. The WHO inaccurately claims that ENDS and smokeless alternatives do not help smokers quit smoking; are more harmful than combustible tobacco; and that nicotine is equivalent to heroin in terms of addictiveness.

The WHO’s position has been compromised

Harm reduction expert and director of the AVCA Nancy Loucas points out that the WHO’s position has been influenced and compromised by vested interests that provide funds to the organisation, such as pharmaceutical companies selling NRTs like as patches.

Similarly, in response to the recent attacks on vaping launched on World No Tobacco Day, the following harm reduction and health experts have written critical comments:

This initiative was coordinated by Iowa Attorney General Miller’s office. AG Miller was a leading figure in the US states’ historic lawsuit against the tobacco industry leading to the Master Settlement Agreement. He has retained an interest in the issue, with a particular focus on the interests of consumers. See Attorney General Miller’s press release – reproduced below.

Agency will ‘miss the targets for reducing cancer, heart and lung disease’

For World No Tobacco Day 2020, an international group of independent experts with no conflicting links to the tobacco or vaping industry has sharply criticized the World Health Organization for its backwards-looking approach to innovation and new technology, such as vaping products. Experts say they are exasperated by the WHO’s dogmatic hostility towards new technology and fear the U.N. health agency will squander the opportunity to avoid millions of premature deaths that will be caused by smoking.

“We know beyond reasonable doubt that vaping and other smoke-free nicotine products are very much less risky than smoking, and that those who switch completely see rapid improvements in their health. Yet the WHO continues to promote the outright prohibition or extreme regulation of these products. How can it make sense to ban the much safer product when cigarettes are available everywhere?”

The group expressed concern that WHO would miss key international objectives for reducing cancer, heart and lung disease.  The Sustainable Development Goals [1] require a one-third reduction in death rates from non-communicable diseases by 2030.  Emeritus Professor Robert Beaglehole of the University of Auckland, New Zealand and former Director of WHO’s Department of Chronic Diseases and Health Promotion commented:

“Unless it does something different and embraces innovation in tobacco policy, WHO will miss the targets for reducing cancer, heart and lung disease by some distance.  Encouraging people to switch to low risk alternatives to smoking could make a large difference to the burden of disease by 2030 if WHO got behind the idea instead of blocking it.”

The longest-serving state attorney general in U.S. history, Tom Miller, who played a leading role in bringing the tobacco industry to account in groundbreaking lawsuit, claimed WHO has lost its sense of mission and purpose. Miller said:

“It’s as if the WHO has forgotten what it is there to do – to save lives and reduce disease. We can do that by helping and encouraging consumers to switch from cigarettes to lower-risk products. This means being honest about the much lower risks and by using smarter regulation to make switching more attractive.”

“When WHO set out to build an international treaty for tobacco control from 2000, the goal was clear – it was trying to tackle the worldwide epidemic of smoking-related disease. Somewhere along the way, WHO seems to have lost its sense of purpose and developed a closed mentality that is leading it to take unworkable, non-negotiable or counterproductive positions that are not backed by sound science. It seems to have neglected its core mission, ‘the highest possible level of health for all people’, including the 1 billion smokers globally, most of whom want to avoid disease and premature death.”

Calling for WHO to refocus its efforts on the major objectives of cancer, cardiovascular and respiratory disease, Professor John Britton, CBE, professor of epidemiology at the University of Nottingham and Director, UK Centre for Tobacco and Alcohol Studies, said:

“On World No Tobacco Day, the WHO should be driven by one overriding question: How do we get smoking down for the greatest number at the greatest rate? We know WHO embraces harm reduction in other areas of public health, including for illicit drugs and sexual health. If WHO wants to even come close to meeting its targets to reduce disease, it needs a strategy for smokers who can’t or won’t quit nicotine, and the rise of smoke-free products since 2010 makes that a practical option. WHO’s ‘quit or die’ approach to smokers and opposition to harm reduction makes no sense.”

“India carries a mammoth health burden of cancer, cardiovascular and respiratory disease arising from the use of tobacco in many different forms, with over 200 million using traditional preparations such as gutka and paan, and another 100 million using smoking products such as bidis and cigarettes. Among them, the most adversely affected are the marginalized and disadvantaged population groups, including women. In my view, the decline in tobacco use has been worryingly slow despite WHO-FCTC being implemented in India. On the World No Tobacco Day 2020, I wish that the decline of tobacco use in all its forms and manifestations was more robust! The complex tobacco use landscape of India warrants a paradigm shift in the way WHO-FCTC to embrace harm reduction approaches.”

The group was concerned that WHO was becoming obsessed with the tobacco industry, just at the time when the industry was facing a highly beneficial disruption by new technology. According to David Sweanor, Centre for Health Law, Policy and Ethics, University of Ottawa, Canada:

“WHO is treating vaping products as though they are part of a ploy by Big Tobacco. But they have this 100 percent wrong. In fact, the new products are disrupting the profitable cigarette trade of the tobacco industry and driving down cigarette sales. It is exactly what we need from innovation, but WHO and its private funders have lined up to oppose it, with calls for prohibition. Though they don’t seem to realize it, they are siding with the cigarette interests of Big Tobacco, erecting barriers to entry to new technology and protecting the incumbent cigarette oligopoly.”

“When smoking is by far the dominant cause of disease caused by tobacco, why would the WHO use World No Tobacco Day to target one of the most effective and popular alternatives to smoking?  We rarely see the vaping industry advertise to adolescents and we never see kids used in commercial vaping ads – but on World No Tobacco Day we have the absurd spectacle of WHO promoting adverts with children vaping. What on Earth do they think they are doing?” [2]

[1]     Goal 3.4 of the SDGs is: “By 2030, reduce by one-third premature mortality from non-communicable diseases through prevention and treatment and promote mental health and well being.” The baseline year is 2015. These goals have superseded a target to reduce adult smoking prevalence by 30% by 2025 compared with 2010.  Both targets will be missed by a large margin on current trends. See: WHO’s NCD Progress Monitor 2020

[2] WHO receives significant funds from Bloomberg Philanthropies, Bloomberg-funded organizations like Vital Strategies and other third-party sources with conflicts of interest.  Michael Bloomberg is on record supporting the outright prohibition of vaping products. See list of WHO voluntary contributors . The Bloomberg-funded group The Union, an international alliance of cancer organizations, has called for prohibition of vaping and other low-risk products in low- and middle-income countries.

Trump: the US is ‘terminating’ relationship with WHO

Meanwhile, just last week, US president Donald Trump announced that he is terminating the nation’s relationship with the WHO, on grounds that the organization covered up coronavirus-related information and generally mismanaged the pandemic situation, as it emerged in China. Trump added that the US will withhold funding from the WHO and redirect funds to other entities.