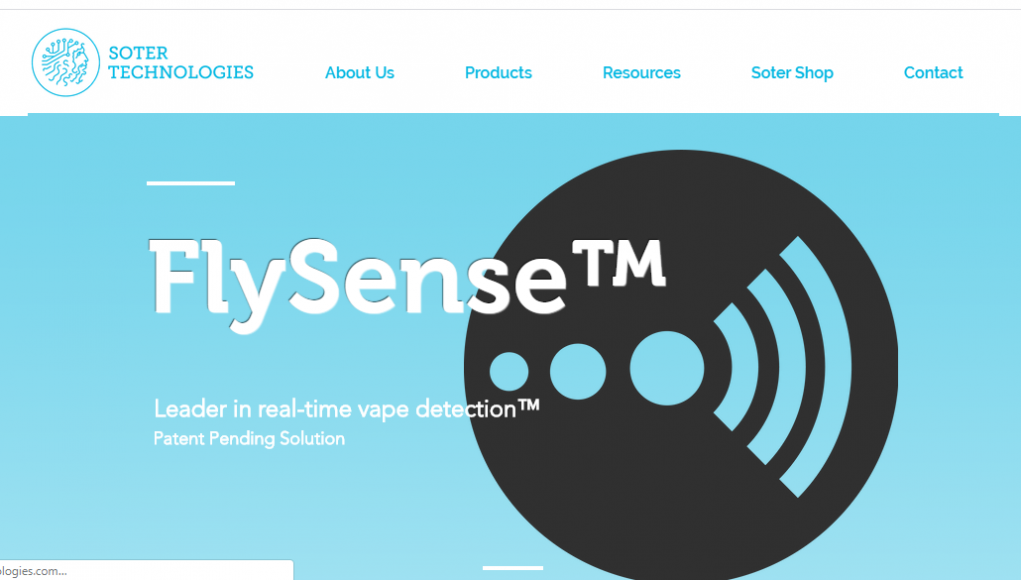 FlySense is a new device manufactured by Soter Technologies, which similar to a smoke detector can detect vaping byproducts in the air, making it an ideal tool for school teachers and administrators to monitor vaping amongst students. “We can determine if a flavour is in the air, if THC is in the air, or if nicotine is in the air,” says CEO Derek Peterson. “The device can determine what’s in the air, whether someone’s using a jewel pen, vaping, or an old fashioned e-cigarette, or a regular cigarette.”

The installed device works by sending alerts to the cell phones of nearby teachers and/or administrators so they are able to take action. Last February, Peterson said that the company had already sold 7,000 FlySense devices across the US, amongst which 1,000 in California.

Both detectors sense changes in air quality, by a “controller configured to identify vaping based on the detected air quality,” which transmits “a signal indicating abnormality matching signature of vaping.”
Meanwhile, Soter Technologies has just sued several companies over their alleged infringement of the detector patent (patent no. 10,699,549). Some of the sued companies are IP Video Corporation, A+ Technology and Solutions, Inc., and Halo Smart Solutions Inc.

IP Video Corporation marketed the Halo Smart Sensor, saying that it was being tested for the first time at a school district in Sussex County, New Jersey, in Summer 2019. IP Video added that besides e-vapour, their device can also detect THC vapour, regular smoke, carbon dioxide, propane, methane, and even things like light levels and air pressure.

“The HALO sensors were simple to install and configure by our own staff members in only a few hours… within the first 3 days of installation, 9 students were caught vaping. Anecdotal reports from students indicate that after only two weeks, vaping has decreased drastically throughout our schools,” said Dr. Mark D. Beehler, Assistant Superintendent of the Salamanca City CSD, last year.

However, Soter is claiming that the HALO device designed by Halo Smart Solutions has infringed their patent for FlySense, adding their product similarly senses changes in air quality, by a “controller configured to identify vaping based on the detected air quality,” which transmits “a signal indicating abnormality matching signature of vaping.”

The complaint added that IP Video Corporation and A+ Technology and Solutions, were part of this infringement by advertising the HALO device on their websites. To this effect, Soter seeks an award of “consequential, special, treble, exemplary and punitive damages.” Soter is represented by Gibbons P.C.