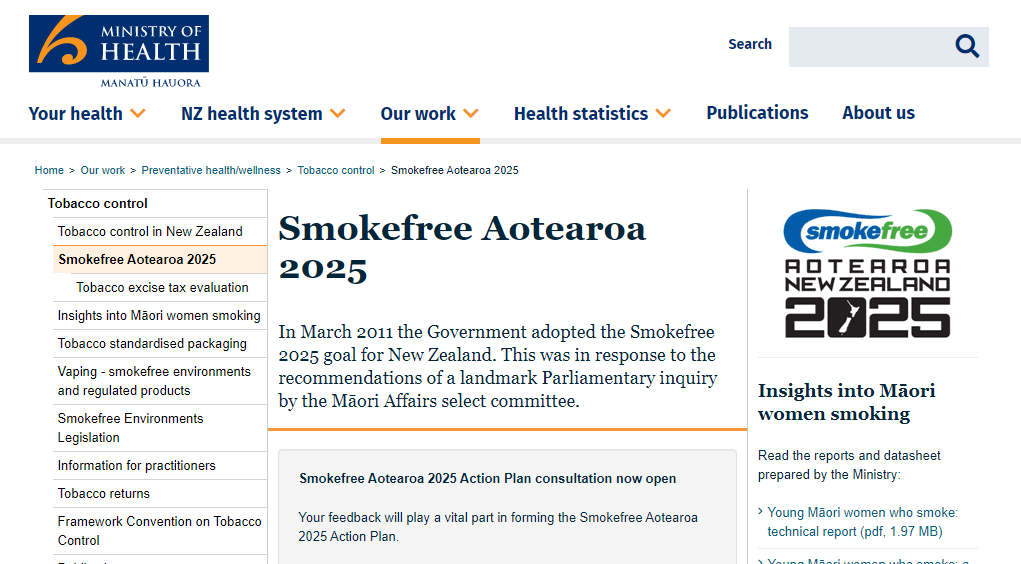 “Back in 2011 when Smokefree 2025 was launched, it was viewed as doable albeit requiring serious and deliberate government programmes and intervention. However, nine years on we’re still sadly miles off,” said AVCA co-director Nancy Loucas, in a recent press release.

Any vape/tobacco tobacco-related actions should dovetail with the country’s smokefree action plan.
However, earlier this year she had pointed out that the recently implemented Smokefree Environments and Regulated Products (Vaping) Amendment Bill, would be counterproductive to achieving this goal. “A huge opportunity has been missed to make risk-reduced vaping products more accessible to smokers in order to reach the SmokeFree 2025 goal set by the government,” she said.

Earlier this month, Loucas explained that any vape/tobacco tobacco-related actions must dovetail with the country’s smokefree action plan. “Finalising the vaping regulations and the smokefree action plan must not been done in silos. The two are intrinsically linked, with vaping an effective tool towards Aotearoa achieving the smokefree goal. It should be regulated proportionately.”

“As the most effective smoking cessation tool in history, vaping has been key to reducing our national smoking rate in the past decade. Going forward, encouraging smokers to switch to much safer and less expensive vaping products is absolutely critical to achieving smokefree,” said Loucas.

Vaping acknowledged for its benefits but still excluded

Sadly, this does not seem the case. The Government’s discussion document on ‘Proposals For A Smokefree Aotearoa 2025 Action Plan’ alarmingly reveals there’s little intention to elevate vaping as a much safer and cheaper alternative to smoking, she said in a recent press release.

“It acknowledges vaping, but it fails to support it as a key factor to achieving a smokefree nation. There’s a lot of talk about tougher rules and regulations for tobacco, but to achieve smokefree, smokers also need to be presented with a viable, less harmful alternative – and that’s vaping,” added Loucas.

The document fails to differentiate between smoking and vaping

Moreover, added the tobacco harm reduction expert, the discussion document fails to differentiate between smoking and vaping. “Vape businesses are already facing enormous costs with many new regulations now being finalised by the Ministry of Health. To now add more compliance costs will only make vaping products more expensive and less accessible to former smokers desperate to keep off the cancer sticks,” she said.

Loucas emphasized that while enhancing existing initiatives such as advertising campaigns and stop smoking services is suggested, vaping needs to have a role in the smoke free plan. “The Health Ministry, Health Promotion Agency, and the District Health Boards have all successfully run ‘Vape to Quit’ promotions and programmes, helping thousands of Kiwi smokers switch to vaping. Why doesn’t the Government recommend ramping up this support and make ‘Vape to Quit’ a cornerstone component of Smokefree 2025? I suspect because vaping is its next target,” she said.