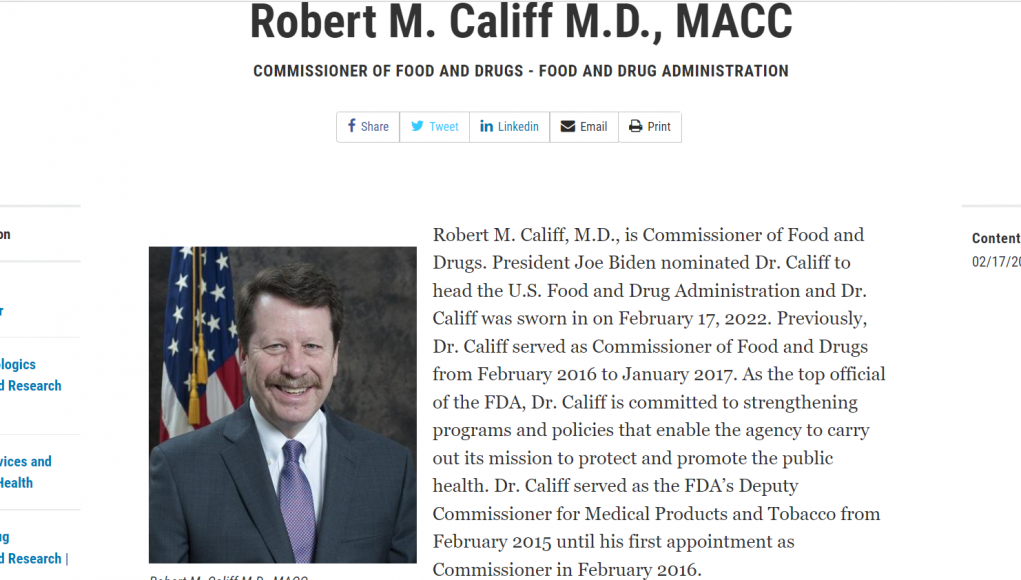 Califf, is a cardiologist has already served as FDA commissioner under President Barack Obama’s administration. Following a bipartisan vote where six Republicans supported him and four Democrats opposed him, he will be taking over from acting commissioner Janet Woodcock.

Numerous senators including Bernie Sanders voiced their opposition to Califf’s appointment, based on his links to the pharmaceutical industry.
“Shockingly, nine out of the last 10 FDA Commissioners went on to work for the pharmaceutical industry or to serve on a prescription drug company’s board of directors,” said Sanders in a previous statement as quoted by Filter.

“Unfortunately, Dr. Califf is not the exception to that rule. After leaving the FDA in 2017, he received consulting fees from Merck, Biogen and Eli Lilly. According to his financial disclosure form, he owns up to $8 million in the stocks of major drug companies. That is exactly the close relationship Big Pharma has exploited to regulate the FDA, instead of the FDA regulating them.”

While given the ongoing pandemic, Califf will have a lot of issues to deal with, with regards to nicotine he will have to oversee recently announced plans, such as the possible ban on the sale of menthol cigarettes and the intention to lower nicotine levels in cigarettes. Meanwhile, the agency’s Center for Tobacco Products (CTP) is still reviewing the thousands of remaining premarket tobacco product applications (PMTAs) that companies had to file in September 2020.

As a result of these, the FDA is facing multiple lawsuits by a number of vape brands who have had their PMTAs rejected despite submitting all the required documentation. In the midst of all this, Mitch Zeller, who has been the director of CTP for close to a decade, announced that he will retire in April. While Woodcock has been criticized for not doing much to address teen vaping rates during her time as acting commissioner.

Meanwhile, many in the vape industry are not too optimistic about Califf’s appointment and are concerned he will just pick up where Woodcock left off. “The FDA has become extremely politicized and his slim confirmation margin is a clear indication he does not have a policy mandate on anything,” said a vape industry insider to Filter. “For an agency that is embattled in PMTA litigation and unwilling to admit how flawed their regulation of the vapor industry has been, Califf needs to completely re-examine his agency’s approach to science and data actually guiding product approval decisions.”