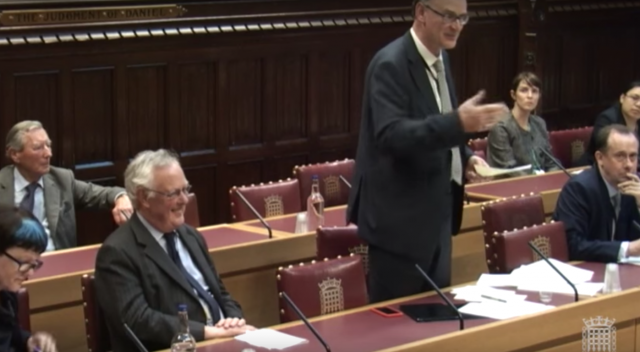 A take note Motion by the Noble Lord, Viscount Matt Ridley, in the House of Lords on May 10 initiated a debate on the Tobacco Products Directive around the e-cigarette.

Ten days before the TPD becomes law, the main objective of his take note motion was, he said “to help my noble friends prevent a historic mistake being made, or at least to raise the issue“. He emphasized the last report by the Royal College of Physicians to recall that Britain is a pioneer in vaping regulation and probably the world’s leading vaping nation. Viscount Ridley pointed out that most of the issues stem in the name that was chosen for the e-cigarettes and suggested to adapt the vocabulary and rather use “vaping device” or “personal vaporizer”, as used by the tobacco expert Jacques Le Houezec.

In contrast to smoking, vaping, that is a consumer driven market, costs nothing to taxpayers, costs nothing to the administration and saves vapers’ money while boosting the economy. In his words, vaping is a “public health revolution“. However, the UK signed up for implementing the TPD that is “the product of big-company lobbying and back-room deals in Brussels“. And he goes further on the topic by declaring to his peers: “The truth is that these regulations were scripted in Brussels by pharmaceutical companies desperately trying to protect the sales of their widely unloved nicotine replacement therapies.”

He recalled the confusion that it brings to see now the e-cigarette’s fate in MHRA’s hands since the Agency, 6 years ago, tried to ban it completely and, 3 years ago, tried to manage it as a medicine. For Ridley, British vapers are libertarians and “dream of the day after Brexit when Britain abolishes the tobacco products directive“.

“Where is the logic in making the most successful substitute to tobacco more difficult to use?“

Ridley asked whether the Minister shared The Royal College of Physicians’s (RCP) position when they qualified “illogical” the big warning labels on vaping products that may deter smokers from using vaping devices. Regarding stronger vaping devices that are more susceptible to suit to hard smokers, the he asked the Minister’s opinion on the recent estimated that their ban would lead to a 105,000 extra deaths in Europe. Finally, with regard to the restrictions imposed by the Directive on tobacco cigarettes and vaping devices, he asked to Minister: “Where is the logic in making the most successful substitute to tobacco more difficult to use?”

Lord Prior of Brampton, Parliamentary Under-Secretary of State for the Department of Health, heard the motions made by several Noble Lords of the audience who globally have no concern with the majority of the directive except the way the e-cigarette is treated. Some of them described their own successes with the e-cigarette, some others, like Lord Callanan, described the efforts to have the things done in the Berlaymont, at a time the Article was still 18 and yet 20.

“This is truly a terrible piece of legislation, and I plead guilty for the part I played in helping to produce it in the first place.” -Lord M. Callanan.
Lord Martin Callanan was one of the people who helped achieve the original decision against this directive’s restrictions on e-cigarettes, the shadow rapporteur for his group and part of the European Parliament negotiating team. He pointed out the absence of help from Department of Health’s officials when attempting to reach the Minister to clarify why “there was such a campaign against something which so self-evidently provides great public health benefits and harm-reduction measures.” A Department of Health who admitted in its impact assessment that the current legislation might increasing and not reduce smoking in the country. He added two points to be addressed to the Minister: “How are smokers supposed to hear about e-cigarettes?” since advertising will be drastically reduced under the new regulation; and how the government plan to regulate the forthcoming “heat-not-burn” products?
“one could expect a message to be given to weights and measures authorities that the Government expect enforcement to be proportionate, minimalist and certainly light touch.” -Lord Hunt of Kings Heath.
Lord Hunt of Kings Heath, president of the Royal Society for Public Health (RSPH) took the speech and declared he was also concerned by Department’s initial reluctancy towards the e-cigarette. He pointed out confusion about e-cigarette after contradictory messages were conveyed to the public by the Media and the Scientists themselves. He acknowledges the Royal College of Physicians and Public Health England for their clear statements that are rallied by a vast majority of professionals and associations. One of his questions addresses the enforcement of the law: “What guidance is going to be given to the weights and measures authorities about taking a light-handed approach to enforcement?”
“The Government’s view is clear: we wish people to quit altogether but if, as a way of quitting, they can give up smoking and take up vaping, that is something that we wish to encourage.” -Lord Prior of Brampton.
In his answer, Lord Prior of Brampton expressed the government’s view on vaping: “I think I can say unequivocally that we are in favour of it as a means for people to come off smoking cigarettes.” In their name, the under-secretary of State endorsed the PHE and RCP’s view and quoted RCP’s president, Pr Jane Dacre: “With careful management and proportionate regulation, harm reduction provides an opportunity to improve the lives of millions of people”.  A “proportionate regulation” that he will recommend as a guideline: “I certainly hope that enforcement will be more Italian than traditionally British, if I may put it that way“.

He clarified several of the concerns of his peers with regard to flavorings and nicotine strengths of e-liquids and on the overall legal aspects of communication around vaping. A last point on which Lord Stoddart of Swindon reacted: “I see television adverts from the pharmaceutical companies for Nicorette and that sort of thing, so why on earth should these products be treated differently?“. On the cost of notification and its effect on the market, he said “I do not think it is right to assume that there will be a significant diminution of the number of products in the market.”

To questions addressing unintended consequences of the regulation, Lord Prior of Brampton recalled the EU Court of Justice ruling on validity of the TPD, including those limiting strengths, and answered “It would be a massive unintended consequence if, as a result of this directive, fewer people gave up smoking.”

Viscount Ridley concluded the debate by recalling some of the principles that should not be omitted “Vaping devices are certainly good for smokers, but in absolute terms they are not good. However, that is not the point. The point is relative harm and harm reduction.” He recalled that his motion was “to express stronger dissatisfaction with the directive and the way it is being brought into law“.

His speech ended with a synthesis of the most pertinent points Lord Prior of Brampton raised:

A video posted by The New Nicotine Alliance – a group of advocates who stand up for vapers’ rights.

This is the most poorly written article I’ve read in a long time. Grammatical mistakes galore and words either added where there shouldn’t be any or missing where they should be there. This mess causes confusion and makes the article difficult to read. Please physically proof read before you post an article.